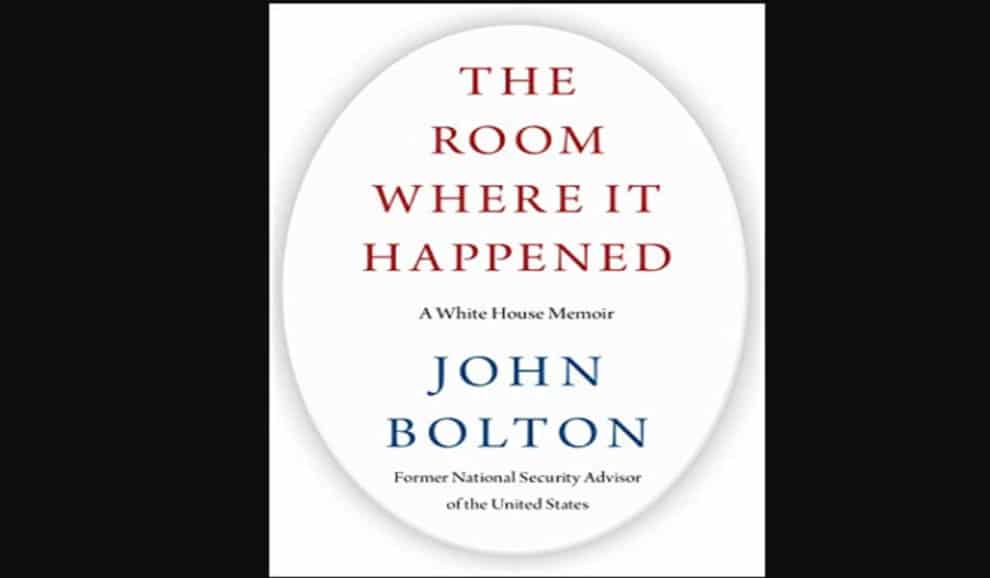 The explosive revelations in former National Security Advisor John Bolton’s upcoming book The Room Where It Happened have shocked people. As one of the top officials in the White House, Bolton had almost daily access to President Donald Trump. The book is set to release on June 23, 2020. But publications such as the New York Times and the Wall Street Journal have obtained leaked PDF copies and excerpts. Here are some of the most important points in the upcoming Bolton book.

John Bolton writes that he was “astonished” by the craziness and “chaos” within the White House under President Trump. The White House had filed a lawsuit to block the publication of The Room Where It Happened. Earlier this week, the US Justice Department filed a motion for an emergency restraining order against the publication of the book. President Trump has called John Bolton a disgruntled burnout.

These are some of the most important points in the book.

The excerpts of the book claim that Donald Trump asked Chinese President Xi Jinping to help him win the 2020 election. In one of his talks with Xi, President Trump started talking about the upcoming US election. He asked Jinping to use China’s economic power to help him win, writes John Bolton.

Trump told the Chinese premier that farmers were critical to the 2020 election, and China could increase the purchase of soybeans and wheat to boost Trump’s electoral outcomes. Bolton could not publish the exact words of the conversation because of objections by the National Security Council.

China has forcefully put millions of Uighur Muslims in detention camps and murdered hundreds of them. According to The Room Where It Happened, President Trump thought China was doing the right thing. “Trump said that Xi should go ahead with building the camps,” writes Bolton in his book. Even publicly, Trump has been silent about China’s inhuman treatment of Uighur Muslims.

In November 2018, Ivanka Trump was in the news for using her personal email for government purposes. Trump had attacked Hillary Clinton for the same reason. But when Ivanka did it, the US President made a statement defending Saudi crown prince Mohammed bin Salman in the murder of journalist Jamal Khashoggi. According to the Bolton book, Trump said, “This will divert from Ivanka. If I read the statement in person, that will take over the Ivanka thing.”

According to the Wall Street Journal, President Donald Trump is of the same view as China’s Xi Jinping, who has eliminated the presidential term limits. During one of their talks, Xi said he wanted to work with Trump for six more years. Trump responded by saying that many have suggested that the two-term constitutional limit should be repealed for him.

Justin Trudeau and many other international leaders have mocked Donald Trump. John Bolton revealed in his book that many of Trump Administration’s top staff have also mocked him behind his back. Bolton received a note from the Secretary of State Mike Pompeo after Trump’s meeting with Kim Jong-un. The note said, “He is so full of shit.”

The book also includes many examples of Trump’s limited knowledge about the world. He once asked the former British prime minister Theresa May, “Are you a nuclear power?” Trump also thought that Finland was part of Russia. He has also explored the idea of invading Venezuela just because it would be “cool.”

Well, a lot of users on Twitter are in search of download links and pdf of John Bolton’s book “The Room Where It Happened”, here are some tweets showing how curious people are to read the ‘secret revealing’ book.

@bigendiansmalls: Over / Under on how long after public release of Bolton’s book there is a PDF available for free download so everyone can read and no one has to buy? I give it 37 minutes.

@KristerJohnson: It would be a shame if someone with a pdf copy of Bolton’s book dumped it online where millions could download it freely, I’d hate to see his book sales suffer because of it.

@b00mer666: @YourAnonNews can you post a PDF of John Bolton’s book so we don’t have to give him money.

@jayk0e: Has anyone got a pdf for John Bolton’s book?

For info on John Bolton’s Book (PDF version online) – Subscribe to our newsletter, follow us on Twitter and Facebook, and we will keep you updated. – Book is now available – you can get it here.