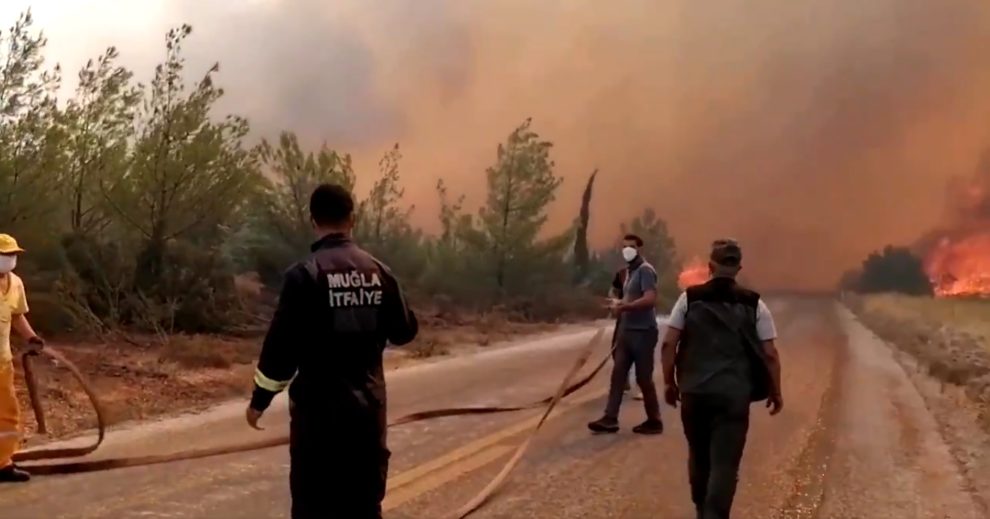 UPDATE Aug 4: The wildfires in Turkey have been raging for a week now, and according to the district mayor, flames have reached a thermal power plant in Milas, which is being evacuated. For days, there had been repeated warnings that the fire was a threat to the facility.

On Tuesday, a local official claimed that forest fires in Turkey were approaching a thermal power plant in Milas.

Milas Mayor Muhammet Tokat stated that the out-of-control fire had reached a critical point and was en route to the power plant.

It comes in the midst of the country’s worst wildfires in at least a decade. Eight people were killed, and thousands were evacuated.

Wildfires have ravaged forests, farmland, and inhabited areas along the Mediterranean and Aegean coasts.

An AFP team in the Aegean town of Marmaris witnessed farmers rescuing their animals from burning barns and transporting them to a beach for safety.

Tourists and villagers were evacuated by boat as the flames spread due to high winds and heat.

Temperatures above 40 degrees in several Turkish cities also resulted in a record increase in electricity consumption, resulting in blackouts in major cities such as Ankara and Istanbul on Monday.

In an effort to assist, the European Union has dispatched three firefighting planes to the country. Water bombers have also been sent to Turkey by Russia, Ukraine, Azerbaijan, and Iran.

This @CopernicusEU #Sentinel3 🇪🇺🛰️image acquired on 1 August shows that the smoke cloud has crossed the Mediterranean and reached Egypt😷 pic.twitter.com/lvfsHzMMwJ

The fires started last Wednesday and are now threatening Antalya, Bodrum, and Marmaris, where hundreds of tourists and residents were evacuated from hotels and homes on Sunday.

As roads were impassable, more than 1,100 people were evacuated by boat, according to Bodrum Mayor Ahmet Aras on Sunday.

The fires have killed eight people and forced the evacuation of 10,000 people in Mugla province alone.

In total, 129 fires that erupted in over 30 provinces have been put out. Over 4,000 firefighters have been dispatched to the scene.

“We are experiencing days with temperatures above 40°C and very strong winds,” Turkish Agriculture Minister Bekir Pakdemirli told a news conference in Milas, one of the towns affected by the fires, on Monday.

According to official data, Turkey is experiencing the worst fires in at least a decade, with nearly 95,000 hectares burned so far in 2021, compared to an average of 13,516 hectares at this stage of the year between 2008 and 2020.

President Recep Tayyip Erdogan and his government have come under fire after it was revealed that the country lacks the water-bombing aircraft required to control wildfires in mountainous areas.

The Republican People’s Party (CHP), Turkey’s main opposition party, has also chastised Erdogan for demolishing the infrastructure of a semi-public organisation that previously owned water bombers and was in charge of firefighting.

Interior Minister Suleyman Soylu said on Monday that authorities are looking into the causes of the fires, which could include human “carelessness” or sabotage by outlawed Kurdish militants. He stated that one person was detained on suspicion of being paid by the group to start a fire.

“We will inform public opinion when the investigation is completed,” Soylu said.

Experts, on the other hand, blame climate change, as well as human-caused accidents, for the fires.

The sweltering heat is also affecting Greece. On Monday, Prime Minister Kyriakos Mitsotakis declared that the country is experiencing “the worst heatwave since 1987.”

From US to Greece to Siberia, Wildfires Rage Worldwide—and More Expected