With over 140 million monthly active users, Twitch is certainly one of the best interactive live streaming service providers for content spanning gaming and entertainment. Many people love this service because of a couple of reasons; one of them is that it’s highly interactive and solely dedicated to live streaming. As amazing as Twitch is, it’s not without its issues. In the past year, users have complained about experiencing several issues on the platform. According to the latest reports, it seems Twitch users are now experiencing a new issue, in which the platform’s ‘First time chatter’ message feature is not appearing.

The rest of this article will shed more light on the new Twitch issue. So, read further to find everything you need to know about it.

Many people love using Twitch because the live streaming platform for gamers offers tons of amazing features. One highlight of this feature is the First Time Chatter Highlight Message, designed to make it a lot easier for you to grow your community. All it does is help creators and mods see exactly who’s new to the chat. It’s pretty simple; when a new user posts a message in your (streamer) chat, the message will come out highlighted, with the tag “First Time Chat” showing right above it.

However, according to multiple reports across various social media sites, the First Time Chat option is currently not showing for many users. The affected Twitch users mentioned that the ‘First time chatter’ highlight message is not appearing anymore. With this issue, streamers can no longer identify new users, making it difficult for them to engaging the newbies.

Some of the affected users mentioned they tried a couple of troubleshooting steps but none of them was effective to address the issue on the ground. You can check here (1,2,3,4) and below to find more information about what the Twitch users are saying about the problem. 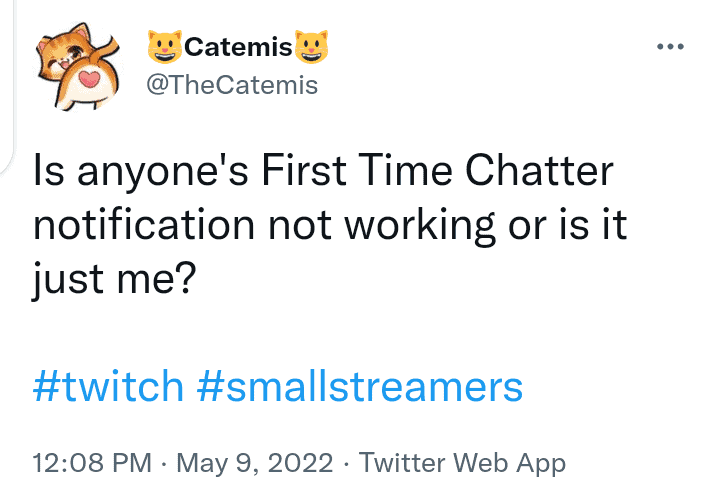 The exact cause of the issue, in which the Twitch “First Time Chatter” highlight message is not appearing, is still unclear. However, looking at the different reports, it seems the issue is bug-related.

The good news is that the Twitch team has come out to acknowledge the issue. They already started working on a fix to resolve the problem. As such, we can safely say that Twitch didn’t intentionally remove the chatter highlight. For now, we don’t know when the official fix will be available but we’ll continue to monitor the team. We’ll update this post as soon as we find relevant information regarding the issue.