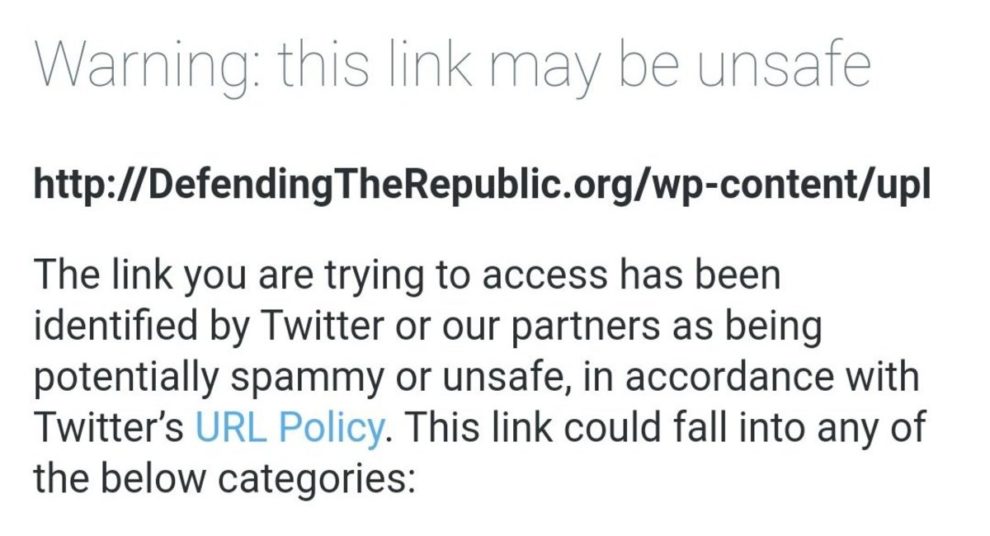 According to the latest reports, Twitter is blocking users from posting links to Sidney Powell’s website, the defendingtherepublic.org. The website has a compilation of the PA and MI lawsuits. Users say that this is extremely unethical since Twitter is limiting the spread of information by demonstrating bias and prejudice. This action by Twitter seems to be defending the Democratic party, says several Trump supporters.

UPADTE: Some users are now able to post the main domain URL (defendingtherepublic.org) of Sidney Powell’s website on Twitter. The main domain link is opening without warning. However, the lawsuit PDF link has been marked ‘unsafe’ by Twitter.

Twitter officials have not commented on this issue nor acknowledged it yet. People are alleging that Twitter is trying to censor information and evidence for election fraud. Users are bringing up the occasion when Hunter Biden’s story by the New York Post was censored by Twitter for violating its supposed community guidelines. The reasoning given by Twitter was that the New York Post contained links of leaked emails that are violative of community guidelines specified on the platform.

The Sidney Powell website aims to protect and defend the legal votes of American citizens cast in the 2020 presidential election. The attorney aims to ensure election integrity by educating the citizens on the meaning of a constitutional Republic. Sidney Powell aims to uphold democracy and wants to pursue legal action to ensure the vision of the Founding father of the United States of America.

Reports suggest that Sidney Powell is ready to file a massive election fraud suit on the foreign and domestic dominion before midnight tonight. If this translates into reality, the lawsuit will be the greatest filed in the history of the United States. Those who read the Sidney Powell lawsuit said that they were “disgusted”, the facts showed that the election was a coup against President Donald Trump.

Sidney Powell highlighted the numerous irregularities in the vote-counting, she alleged that the foundation of the system was based on procedure changes and ad hoc mechanisms. She emphasized on the occasions when ballots were put in wrong stacks and pre-printed ballots were unlined. She also stated that Republican observers were blocked from vote-tabulation tables. She further emphasized that the dominion voting machines are susceptible to hacking and even experts have written scripts to demonstrate how an individual can manually manipulate vote counts. Hackers can shift ballots to a “question” pile and then simply delete them.

One user tweeted, “So Twitter gave me a three-day warning and won’t allow me to retweet certain folks… I can’t retweet Sidney Powell or Craig Sawyer so far… make sure you’re following me on Parler as they ramp up conservative censorship yet again…”

The Sidney Powell lawsuit alleges voter fraud on a massive scale. Citizens of the United States are eager to see where this goes. The nation seems to be divided in opinions, while some are asking for evidence of these allegations, others are mocking spelling mistakes in the legal brief.