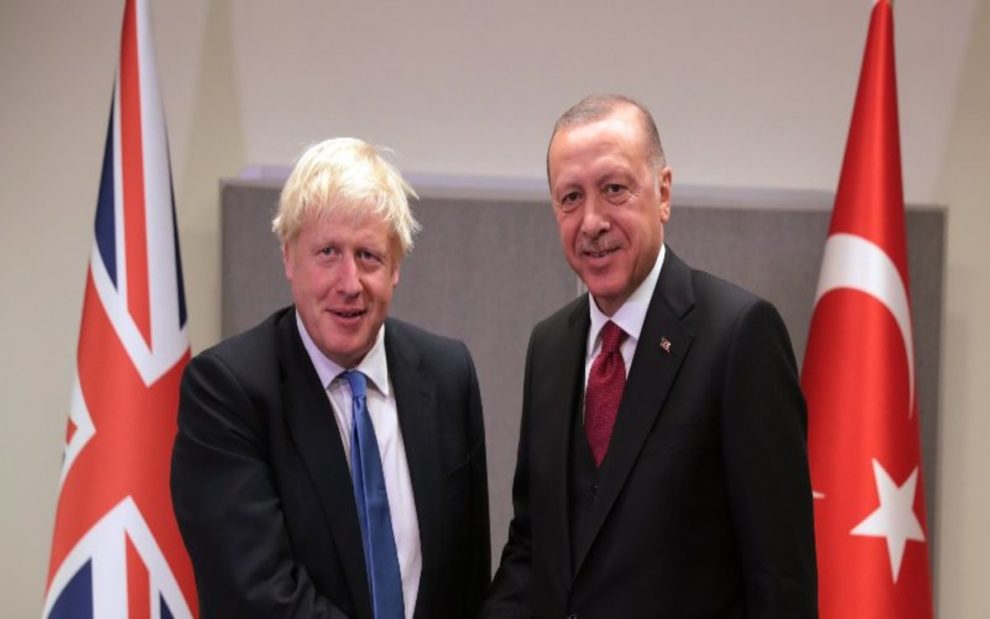 Trade agreements between the UK and Turkey is “very close,” Turkish Foreign Minister Mevlüt Çavuşoğlu said during a visit to Britain in July. London’s endeavor to secure post-Brexit trade agreements reflects on the status of its economic relations with Turkey. A UK-Turkey trade agreement is important for both countries, not only commercially, but also geopolitically as it can extend into the Ukraine against Russia, particularly in the Black Sea.

Turkey’s posturing to Ukraine attempts to change the security structure in the region.

The trade agreement is crucial because the EU’s relationship with Turkey and the UK have deteriorated. Brussels and Ankara clash over the erosion of democratic controls and balances in Turkey, and also because of its increasingly dynamic foreign policy in Libya and the Eastern Mediterranean against Greece and Cyprus. Turkey’s relationship with the U.S. has also intensified, especially since Ankara bought the Russian S-400 missile defense system despite opposition from Washington and NATO. With it appearing imminent that Joe Biden will become the next U.S. President, relations between Washington and Ankara are set to deteriorate further.

This makes the UK one of Turkey’s few remaining friends in the West, and for Ankara a trade deal would signal a close economic and political relationship with a major European power that still wields international influence. For its part, the UK was willing to cultivate a good relationship with Ankara in the context of a “Global Britain” that it wants to build after Brexit.

When it was still a member of the EU, the UK was one of the leading supporters of Turkey’s membership into the bloc. London has also taken a much more discreet stance than other European capitals in condemning President Recep Tayyip Erdoğan for the deteriorating domestic situation. When Turkey launched a military operation in Syria in 2019, the UK was initially reluctant to condemn Ankara unlike other NATO members, just like what happened when Turkey intervened in Libya.

It was always inevitable that a post-Brexit UK would have strengthened relations with Turkey, especially as British Prime Minister Boris Johnson often boasts that his paternal great-grandfather, Ali Kemal, was a former Ottoman Minister of the Interior.

Johnson describes the Gülen movement, once allied to Erdoğan but now considered a terrorist organization by Ankara, as a “cult.” He also supports Turkey’s post-coup purges that resulted in the detainment of over half a million Turkish citizens, not only from the military, but also from education, media, politics and many other sectors.

It appears that Johnson’s post-Brexit “Global Britain” has Turkey as a lynchpin for its renewed international engagement with the world, and this poses immense security risks for Russia, especially in the Black Sea.

Erdoğan was outraged when Canadian Prime Minister Justin Trudeau suspended arms shipments to Turkey because of its involvement in Azerbaijan’s war against Armenia. This was a major blow to the TB2 Bayraktar drones that are highly valued by Erdoğan as he uses them in his military adventures in not only Libya, Syria and Nagorno-Karabakh, but also in the Aegean in espionage acts against so-called NATO ally Greece. He has even set up a drone base in occupied northern Cyprus to oversee the Eastern Mediterranean.

The so-called “domestically produced” Bayraktar drones have been exposed for using parts from nine foreign companies, including a Canadian one. Although Erdoğan was outraged by Trudeau’s decision, he found a British company to replace Canadian parts. Britain’s decision to be involved in the Bayraktar drone program is all the more controversial considering five of the nine foreign companies involved have withdrawn their support because of Turkey’s role in the Second Nagorno-Karabakh War.

Although the growing unofficial alliance for now appears to be in the fields of economics and military technology, alarming reports are emerging that British troops will be stationed in Ukraine’s Mykolaiv Port on the Black Sea.

Ukrainian Foreign Minister Dmytro Kuleba told the BBC that if British troops “land there and stay, we will not mind either. From the first day of the Russian aggression, Britain has been close and provided practical support, and not only militarily.”

Post-Brexit Britain will not weaken its maximum pressure against Russia, and rather it appears to be increasing its campaign. Britain, as a non-Arctic country, is attempting to bully its way into Arctic geopolitics by undermining Russian dominance in the region. However, Britain’s campaign of maximum pressure creates instability on Russia’s vast frontiers, including in Ukraine and the Black Sea.

With this we can see an informal tripartite alliance emerge between the UK, Turkey and Ukraine.

Kiev has formed a venture with Ankara to produce 48 Turkish Bayraktar drones in Ukraine. This also comes as Ukraine’s Ukrspetsexport and Turkey’s Baykar Makina established the Black Sea Shield in 2019 to develop drones, engine technologies, and guided munitions. In fact, Turkey will allow Ukraine to sell Bayraktar drones it produces, which will now contain British parts after several foreign companies withdrew from the drone program. It is not known whether Bayraktar drones can currently be produced because of the mass withdrawal of foreign companies, but we can expect Ukrainian and British companies to eventually fill the voids left behind.

Both Turkey and Ukraine cannot challenge Russian dominance in the Black Sea alone, and it is in their hope that by closely aligning and cooperating that they can tip the balance in their favor, especially if Britain will have a military presence in Mykolaiv Port. Ukraine still does not recognize Russian sovereignty over Crimea, Britain maintains sanctions against Moscow because of the reunification, and Turkey continually alleges that Russia mistreats the Crimean Tatars.

Erdoğan uses Turkish minorities, whether they be in Syria, Greece or Cyprus, to justify interventions and/or involvement in other countries internal affairs. Erdoğan is now using the Tatar minority to force himself into the Crimean issue while simultaneously helping Ukraine arm itself militarily. With Turkish diplomatic and technological support, alongside British diplomatic, technological and perhaps limited military support, Ukraine might be emboldened to engage in a campaign against  Crimea or disrupt Russian trade in the Black Sea.

It certainly appears that an informal tripartite alliance is emerging between the UK, Turkey and Ukraine, and it is aimed against Russia in the Black Sea to end the status quo and insert their own security structure in the region on their own terms.