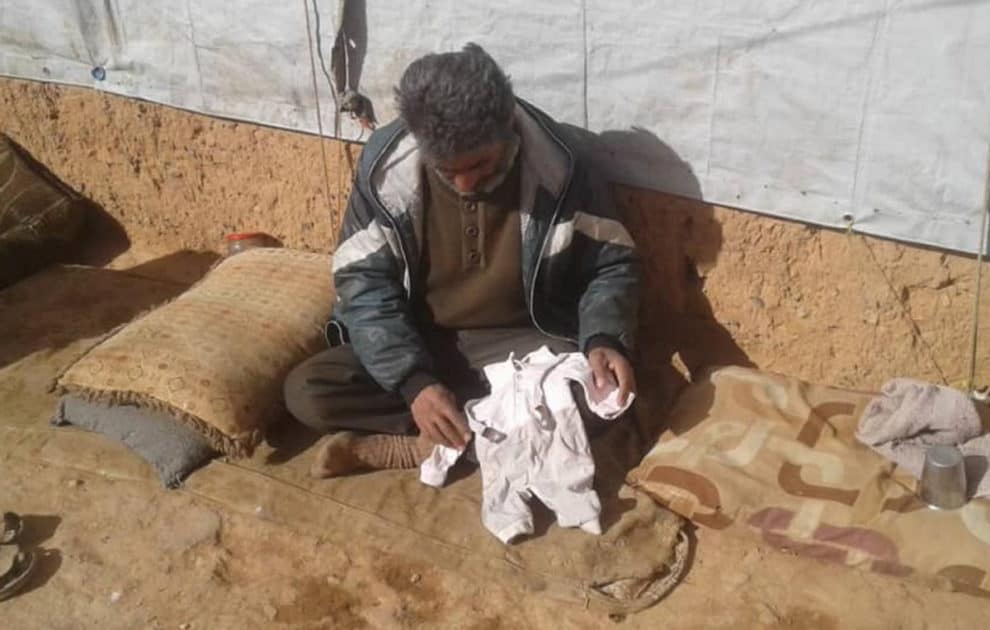 A man mourning the death of his baby child in the Al-Rukban camp where Syrian citizens are living under inhumane circumstances. Al-Rukban is a so-called refugee camp located in a remote area on the Syrian border near the extreme northeast area of Jordan, close to the joint borders with Syria and Iraq. The area became a refugee camp for Syrians in 2014. The camp is governed by US troops, who use the camp to train “refugee“ men to become U.S. mercenaries, not to fight ISIS (DAESH) but the Syrian Arab Army (SAA)

A new video statement came out which proves the inhumane circumstances in the camp. The U.S. and Western MSM want us to believe that the Syrian government is withholding food and medical supplies to the camp, but according to some Syrian citizens who fled the camp, it‘s quite the opposite.

What is really going on in the Al-Rukban camp? It’s controlled by the US! Some US-sponsored militants surrendered on April 17th to the SAA and handed in their weapons to the Syrian government after they managed to flee the Al-Rukban camp. On the border of the security zone, they were attacked by their former US-sponsored Maghawir al-Sawa terrorist group. They were part of this group but decided to surrender to the SAA. They described to ANNA-news (R&U Videos) their surrender and the “life“ in the Al-Rukban camp. They were equipped with stockpiles of US weapons, and according to them, fought the SAA and not DAESH.

The triangle Palmyra/Deir-Ez-Zor/Bukamal has lately been the target of ISIS squads. The Liwa-al-Quds brigade is trying to do a great job by eliminating DAESH in the triangle, with heavy losses (Liwa-al-Quds is a Palestinian brigade loyal to the Syrian Government), but DAESH seems to be equipped with the latest modern weaponry and vehicles. According to the defected witnesses from the US-sponsored Maghawir al-Sawa terrorist group, they went out to fight to defeat DAESH, but half-way through their operation combat, they got orders from the US to leave and instead fight the SAA whilst leaving their military gear behind, thus making them an easy target for DAESH.

The CIA launched the covert train-and-equip program Timber Sycamore in early 2013. It was designed to pressure the Syrian government on the battlefield while regulating the flow of arms and cash that had already been pouring in from Gulf countries, NATO, and Turkey.

The CIA, along with the US and NATO, trained thousands of so-called rebel fighters from the so-called Free Syrian Army (FSA) that they established with affiliated militias at bases within Turkey to the north and Jordan to the south. Those bases functioned just like the Al-Rukban camp, which still is a US/NATO training camp that’s also recruiting refugees who have nothing to lose. They’re enticed by food and medical aid for their families, and of course a small salary of approximately $300, which is exactly the amount that they have to pay when they want to leave the camp.

Every operation and battlefield movement was managed from the Military Operations Centre (MOC) in Jordan and Turkey, which was “manned“ with US, French, British, Saudi, and Emirati intelligence and military officials.

The US and its allies provided the so-called rebels with arms, heavy machine guns, mortars, sniper rifles, and the “famous“ Toyota vehicles, which also came from the Netherlands.

The Trump Administration’s suspension of the Timber Sycamore program followed months of scaling down the program. The remaining part of this program is the Al-Rukban camp. The official statement said that the end of the CIA program was to build a small fighting force to oust DAESH from Syria.

Statement Of A Syrian Family

A refugee family who fled the camp tells what really happened in the US-controlled Al-Rukban camp. They suffered from hunger, thirst, and sickness. They received some aid, but most of the aid went to the mercenaries who they hired inside the camp. The US is trying to pressure the non-militants, thus the civilians, to join their training program by blackmailing them with food and military aid. The men then secretly receive training at the Iraqi border. The reason the US is there is that they can’t allow the opening of the border between Syri -Damascus, and Iraq-Baghdad because they are afraid that Iran will then dominate the region. Of course, we all know by now that Iran is one of the targets of the US and its allies, just like China and Russia are. It was even described as a member of the so-called “Axis of Evil” by George Bush, Jr. in his 2002 speech. Iraq was also mentioned, and it’s been subsequently destroyed just like Afghanistan and, more recently, Libya was.

The family also reports that a lot of US soldiers recently fell sick, most likely from COVID-19, which is a real danger for the Syrian civilians who are inside the camp. Medical aid is not present and the nearby medical center opens one out of every ten days. This is a dangerous situation that many refugees want to escape from, but they have to pay $300 per person in order to leave. Thus, they are driven into the “arms“ of the US Army, to join their militia group to fight the SAA, even though they want to return to the Syrian government-held areas.