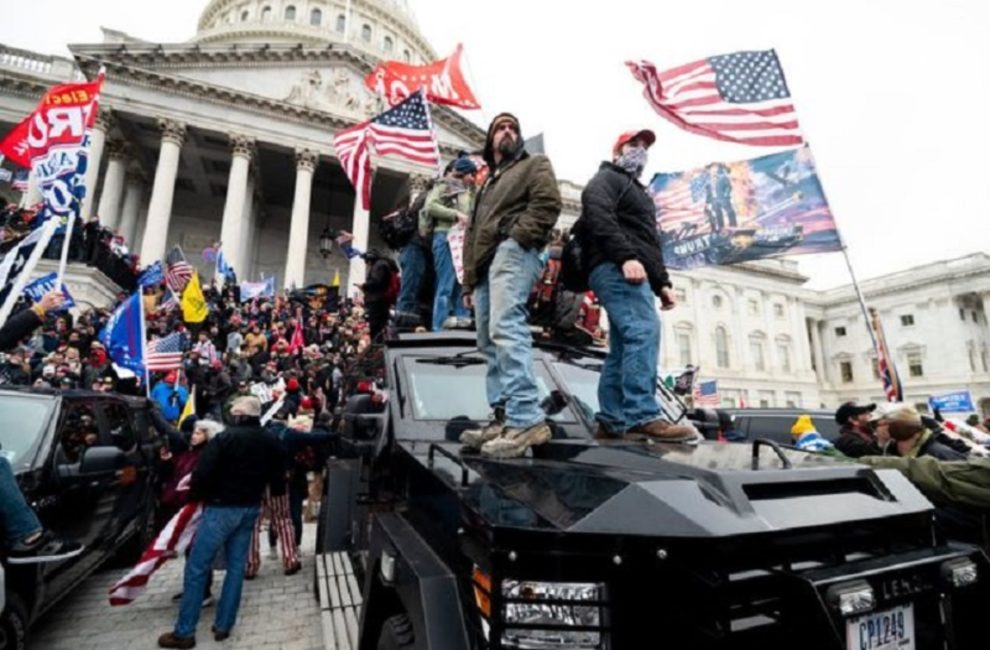 The unprecedented storming of the US Capitol on Wednesday following Trump’s Save America March is a classic Color Revolution tactic, though one which has divided Americans like never before over whether this stunning development is an anti-constitutional coup attempt by the incumbent’s supporters in order to help him cling to power instead of abdicating in two weeks’ time, or a legitimate “Democratic Security” movement by patriotically inclined people who desperately want to stop the steal and prevent an illegitimate placeholder from seizing power.

Color Revolution In The American Capital

The whole world was shocked by the unprecedented storming of the US Capitol on Wednesday. Earlier that day, Trump gave a rousing speech for over an hour powerfully making his case that the election was stolen from him but corrupt politicians and weak members of his own party are letting the culprits get away with it. He then led the Save America March, after which the building was stormed in classic Color Revolution fashion. Americans are now divided like never before over whether this stunning development is an anti-constitutional coup attempt by the incumbent’s supporters in order to help him cling to power instead of abdicating in two weeks’ time, or a legitimate “Democratic Security” movement by patriotically inclined people who desperately want to stop the steal and prevent an illegitimate placeholder from seizing power. So as to better understand what’s happening, a review of relevant terminology is in order, after which these new concepts will be discussed at length with a view towards helping everyone independently draw their own conclusions about this rapidly developing situation.

Color Revolutions in their theoretically purest form refer to the political weaponization of people-driven protest movements, most often in pursuit of regime change but also for the purpose of regime tweaking (concessions) and regime reboot (far-reaching constitutional reform), as well as regime reinforcement like is arguably the case with Wednesday’s events. In practice, however, this term usually refers to the external provocation, management, and guiding of this process, the core mechanics of which I explained at length in an analysis for the Center for Syncretic Studies in December 2014 which should be reviewed by those who want to obtain a deeper understanding of this concept. What’s happening in the US right now, both over the past half year with Antifa and Black Lives Matter (BLM) but also at the moment in Washington DC, doesn’t have any external hand behind it, though the aforementioned hyperlinked analysis is still very relevant for explaining the basic organizational concept involved.

What Are Hybrid Wars?

Unconventional Warfare, meanwhile, refers to acts of insurgency, rebellion, terrorism, and other forms of irregular violence, exactly of the sort that’s plagued America since last summer. I describe the transition from Color Revolutions to Unconventional Warfare as Hybrid War, though that latter term has many other applications as well. In fact, I even wrote a book about this process in 2015 as it relates to Syria and Ukraine titled “Hybrid Wars: The Indirect Adaptive Approach To Regime Change”, the digital version of which can be purchased at Amazon or can be read for free at Oriental Review for those who are unable to afford patronizing my work. It was published by the People’s Friendship University of Russia (RUDN) and reviewed by the Russian Diplomatic Academy. Moreover, my work was even cited twice by the NATO Defense College on page 2 of their November 2015 research paper on “Russia’s Renewed Military Thinking: Non-Linear Warfare and Reflexive Control” and page 10 of their December 2015 book about “NATO’s Response To Hybrid Threats“.

The Hybrid War Of Terror On America

In other words, humbly speaking, I’m a globally recognized expert in this field, though I’m against so-called “arguments from authority” in the sense of pressuring people to agree with me just because of my professional credentials. I’m only bringing this up to prove that I’m an authoritative source on the topic and that my analyses should at least be taken seriously by all even if some people ultimately disagree with them. Last June, I published a piece about how “The Hybrid War Of Terror On America Was Decades In The Making”, which explored how Antifa and BLM were being instrumentalized for this purpose all over America. Since then, everyone saw how many local, state, and federal authorities — be they political or security ones — didn’t take this threat seriously. The Mainstream Media and the Democrat Party even actively legitimized this nationwide crime wave, aggressively attacking those who publicly condemned it. But lo and behold, that was ultimately counterproductive for their cause after what happened on Wednesday in Washington DC.

Before discussing that, it’s important to introduce my concept of “Democratic Security”, which I first unveiled when analyzing counter-Color Revolution events in the Republic of Macedonia in 2015 but then later elaborated upon more at length a year later in an extended analysis about how “Color Revolution Technology Isn’t Just Black And White”. I observed that this technology has proliferated so far and wide since Pandora’s Box was first opened by the late Gene Sharp several decades ago that it’s amiss to see it solely as a threat since it could also be utilized as an opportunity if some of its popular protest tactics are creatively leveraged for the purpose of regime reinforcement (the opposite of regime change). I then shared the gist of my “Democratic Security” research with the Russian government while speaking at a Duma round table event in May 2016. The text of my speech was later published under the title “Hybrid Wars And Democratic Security”. All of this is important for the reader to keep in mind as we now transition to discussing the storming of the US Capitol.

What Really Happened In Washington DC?

Democrats and their Mainstream Media allies are convinced that what took place on Wednesday is an anti-constitutional coup attempt, though I argue that it was actually an exercise in “Democratic Security”. Trump riled up his supporters shortly before those fateful events unfolded by reminding them of how the election was stolen from them. It’s unclear whether he meant to “incite” the subsequent storming like his opponents speculate, and he did later tweet that everyone should remain peaceful, but he nevertheless at the very least unwittingly contributed to what happened. His supporters clearly employed Color Revolution tactics such as storming buildings and the strategic use of violence to generate instant attention to their agenda, but they did so for regime reinforcement purposes, not regime change ones. This therefore makes it the world’s most prominent example thus far of “Democratic Security” in practice, exactly as I predicted would happen in my appeal right after the vote about how “It’s Time To Employ ‘Democratic Security’ Strategies To #StopTheSteal”.

It’s ultimately up to each person to decide how they feel about each example of Color Revolutions, Hybrid Wars, and “Democratic Security” exercises. As was mentioned earlier, the Democrats and Mainstream Media legitimized the employment of far more destructive and much larger scale Color Revolution tactics over the past half year under the banner of Antifa and BLM, yet they’ve now done an about-face and want Americans to condemn the comparatively more peaceful expression of these tactics as embodied by Trump supporters who are carrying out their actions for the purpose of “Democratic Security”. That’s also not to mention their impassioned backing of the nearly decade-long Hybrid War of Terror on Syria, as well as the ultra-nationalist-led spree of urban terrorism in Ukraine seven years ago that’s nowadays popularly described as “EuroMaidan” (also known as the so-called “Revolution of Dignity”). These double standards speak to the inherent politicization of Color Revolution technology.

The bigger picture at play is how this selfsame technology has since boomeranged back into the American Heartland after first being unleashed and subsequently perfectly abroad over the past several decades. It’s now no longer Democrats that are employing these tactics, but conservatives, though the latter of which are utilizing the most cutting-edge variant of “Democratic Security” for regime reinforcement purposes. This dynamic greatly complicates the situation and immensely raises the risk of more profound civil unrest exploding in the US in the weeks to come. The reaction of the security services will be telling in this respect since their suppression of Trump supporters’ exercise in “Democratic Security” in Washington DC over the span of less than a single day in contrast to their passive facilitation of the Democrats’ regime change employment of these similar tactics nationwide over a half-year-long period would speak to their tacit endorsement of the latter, thereby adding credence to the claims that Trump’s “deep state” foes have always truly been out to get him.

To wrap everything up, everyone is entitled to their own opinion about Antifa-BLM and Trump supporters’ employment of Color Revolution tactics for different ends, but all honest observers must nevertheless recognize that both of them are utilizing this technology. Ignoring this indisputable fact just because of presumed value judgements associated with that term and other related ones such as Hybrid War and “Democratic Security” is the definition of dishonesty. It’s time that Americans openly discuss the proliferation of Color Revolution technology into their society and its increasing ubiquity over the past half year. Once the proverbial genie is out of the bottle, it’s extremely difficult to put it back in unless the decision is made to controversially resort to the unprecedented use of force and impose far-reaching restrictions on society which oftentimes have a knack of ultimately backfiring even if it takes some time (hence the point of “fighting fire with fire” through “Democratic Security” methods). Regardless of one’s partisan disposition, everyone should agree that America is in crisis.