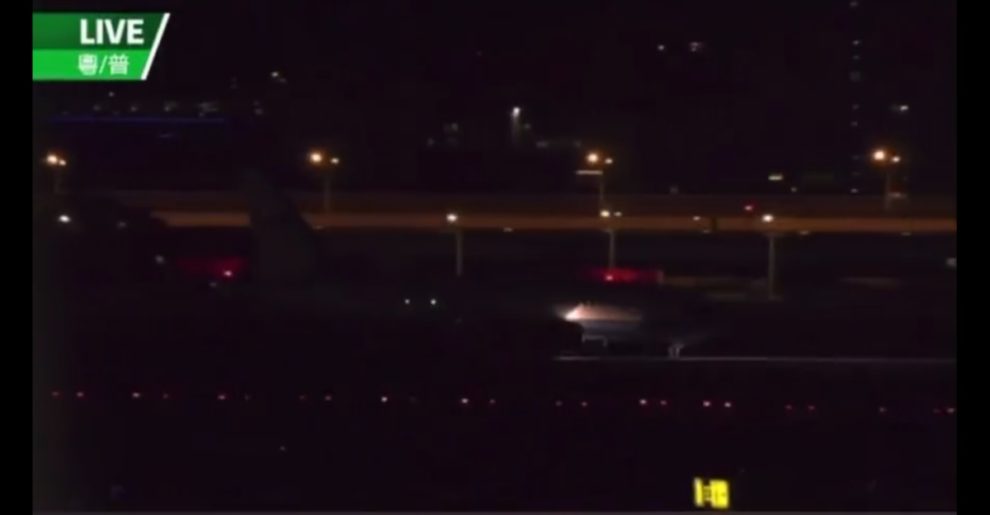 US House Speaker Nancy Pelosi landed in Taiwan on Tuesday evening, defying a string of increasingly stark warnings and threats from China that have sent tensions between the world’s two superpowers soaring.

Pelosi, second in line to the presidency, is the highest-profile elected US official to visit Taiwan in 25 years and Beijing has made clear that it regards her presence as a major provocation, setting the region on edge.

Live broadcasts showed the 82-year-old lawmaker, who flew on a US military aircraft, being greeted at Taipei’s Songshan Airport by foreign minister Joseph Wu.

“Our delegation’s visit to Taiwan honors America’s unwavering commitment to supporting Taiwan’s vibrant democracy,” she said in a statement upon her arrival, adding that her visit “in no way contradicts” US policy towards Taiwan and Beijing.

Pelosi is currently on a tour of Asia and while neither she nor her office confirmed the Taipei visit, multiple US and Taiwanese media outlets reported it was on the cards — triggering days of mounting anger from Beijing.

China’s military said it was on “high alert” and would “launch a series of targeted military actions in response” to the visit.

It promptly announced plans for a series of military exercises in waters around the island to begin on Wednesday, including “long-range live ammunition shooting” in the Taiwan Strait.

“Those who play with fire will perish by it,” Beijing’s foreign ministry added.

China considers self-ruled, democratic Taiwan as its territory and has vowed to one day seize the island, by force if necessary.

It tries to keep Taiwan isolated on the world stage and opposes countries having official exchanges with Taipei.

In a call with US President Joe Biden last week, Chinese President Xi Jinping warned Washington against “playing with fire” on Taiwan.

While the Biden administration is understood to be opposed to a Taiwan stop, White House National Security Council spokesman John Kirby said Pelosi was entitled to go where she pleased.

“There is no reason for this to erupt into conflict. There’s no change to our policy,” he told CNN shortly after Pelosi’s arrival.

The last speaker of the US House of Representatives to visit Taiwan was Newt Gingrich in 1997.

Kirby reiterated that US policy was unchanged toward Taiwan.

This means support for its self-ruling government, while diplomatically recognising Beijing over Taipei and opposing a formal independence declaration by Taiwan or a forceful takeover by China.

Moscow said it was “absolutely in solidarity with China”, calling the prospect of a Pelosi visit “pure provocation”.

China has refused to condemn Russia’s invasion of Ukraine and has been accused of providing diplomatic cover for the Kremlin by blasting Western sanctions and arms sales to Kyiv.

So many people were tracking the US military plane ferrying her on FlightRadar that the website said some users experienced outages.

The plane took a circuitous route that avoided the South China Sea — which Beijing claims — before heading up the east coast of the Philippines.

Press access around Pelosi has been tightly restricted and limited to a handful or short statements confirming meetings with officials.

Her itinerary includes stops in South Korea and Japan — but the prospect of a Taiwan trip dominated attention.

Taipei’s government had stayed silent on whether she would visit but news kept leaking out.

The capital’s famous Taipei 101 skyscraper was illuminated with the words “Speaker Pelosi… Thank You” on Tuesday night an hour before Pelosi’s plane arrived.

Taiwan’s 23 million people have long lived with the possibility of an invasion, but that threat has intensified under Xi, China’s most assertive ruler in a generation.

“Beijing shouldn’t get to decide who can visit Taiwan or how the US should interact with Taiwan,” Wang Ting-yu, a lawmaker from the ruling Democratic Progressive Party, told AFP ahead of the visit.

“But the probability that… (China) will take a series of military, economic, and diplomatic actions to show strength & resolve is not insignificant,” she wrote on Twitter.

Taipei’s Council of Agriculture on Tuesday said China had suspended the import of some Taiwanese goods, including some fishery products, tea, and honey. The council said China cited regulatory breaches.

Pelosi’s potential visit has been proceeded by a flurry of military activity across the region that highlights how combustible the issue of Taiwan is.