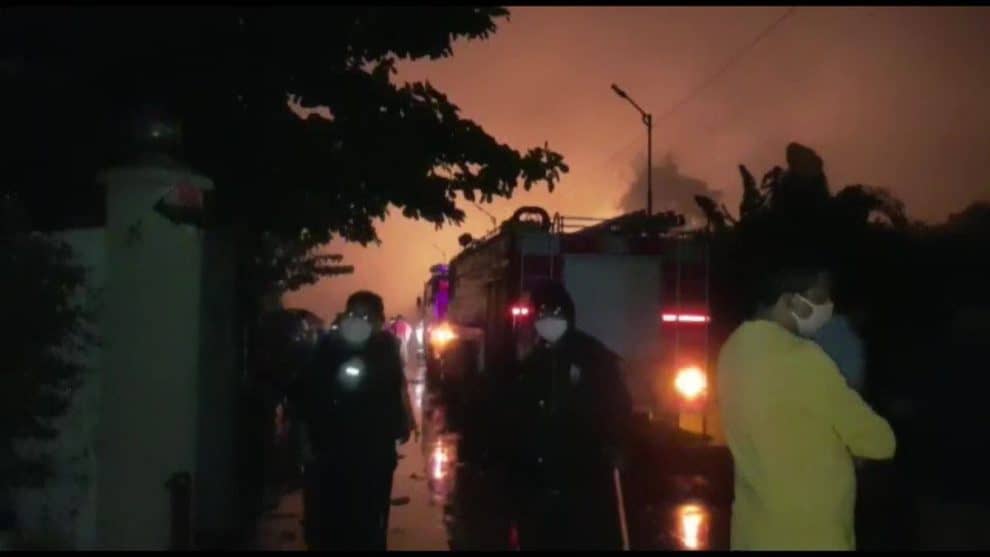 A massive fire broke out at Nandolia Organic Chemicals Factory in Palghar around 7:30 pm this evening. This tragic incident has reduced the entire town to ashes and dust. The intensity of this fire was so ferocious that the sound of the blast was heard from several kilometers away including regions in Boisar, Pastha, Salwad villages and Nandgaon sea coast.

The cause behind this fire blast is still unknown, and no official statement has been released yet.

According to Police personnel, 1 man has passed away while 4 workers have been gravely injured. Those injured were promptly transferred to Tunga Hospital located nearby.

The rescue team is working hard to save all those who have affected by this unfortunate incident. MIDC sent two fire tenders as soon as they were made aware of the situation, reinforcements were sent from Palghar, Tarapur and Dahanu.

Visual images and videos from the scene indicate that fire broke out on a massive scale, even the windows of nearby buildings appear to be shattered. Pradip Kasbe, the senior inspector at Boisar Maharashtra Industrial Development Corporation (MIDC) Police station told the press that “the blast is believed to have occurred in the reactor during a process, shattering the window panes of adjoining pharma units too.”

Details regarding those affected by this blast were revealed on the local news channels. The dead body has been identified as Sandeep Khushwara. According to the rescue team, his body was found closer to where the fire seems to have originated. The injured workers were identified as Pramod Mishra (Aged 35), Dilip Gupta (Aged 28), Mohammed Ansari (Aged 31), and Umesh Khushwara (Aged 21). Dhavanjeet Sharma, the account manager of the company informed the police that 14 workers were doing their night shift at the factory when the fire erupted.

Out of the 14, 9 were able to run out of the premises as soon as the fire broke out. These 9 workers were able to take shelter on plot 141 and remained unhurt. The police further revealed to the press that an FIR will be registered once the Directorate of Industrial Safety and Health (DISH) submit their report. An inquiry will be held to investigate the cause of the fire.