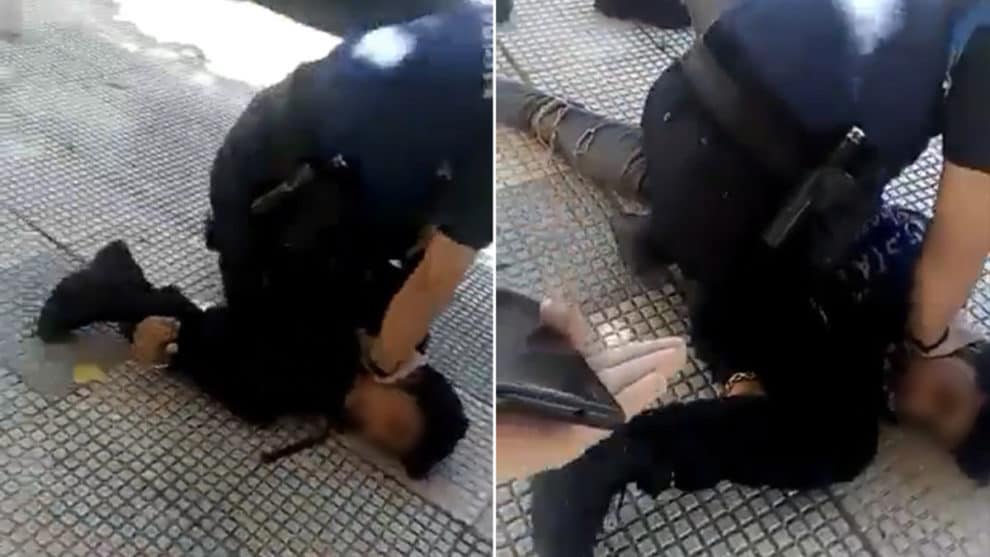 A video surfacing on social media shows a Spanish police officer kneeling on the neck of a 14-year-old boy. The video has sparked outrage against the officer and support for the 14-year-old who is seen howling in pain. Reports say that the police officer behaved in such an inhumane manner because the teenage boy had not been wearing his mask properly.

Thankfully the incident was filmed by onlookers in the Northern town of Miranda be Ebro. The video recorded on Wednesday shows locals gathering around the Spanish police officer to protest the officer’s behavior towards the boy. One person is seen trying to pull the officer away from the boy.
Authorities have responded to the video by claiming that the event was filed “out of context.” The authorities have gone a step ahead to claim that the teenager attacked the police officer. Pablo Gomez, the city’s security councilman said, “[The footage] is striking but the response was adequate and proportional to what happened.” The response from authorities regarding this video is shocking and upsetting.

Pablo Gomez also claimed that the boy had attempted to assault the police officer with a chain after he was asked to properly wear his mask. He added, “Before making a judgment people need to know the full version of events.” Witnesses present at the scene recall that no such incident happened. The police offer acted out of frustration and the teenage boy fell prey to this systematized oppression of police brutality. It is ironic when the people designated by the state to protect you are the ones causing you harm.

The parents of the teenage boy have confirmed that the boy was wearing a mask around his neck when the police officer approached him. Currently, the officer is on sick leave due to a cheek injury he sustained during the arrest. This seems like a cover-up to avoid any embarrassment after what he did. As of right now, it is unclear what penalties the boy will be charged with.

Social media users have commented that this is yet another instance among many of “excessive use of force“ and “police brutality“. The video shows the Spanish police officer visibly suffocating the teenage boy. The social media user who initially posted the video captioned it, “this is not the United States,” this was a direct reference to the murder of George Floyd.

George Floyd was an African-American man who was murdered brutally in Minneapolis police custody. His murder resulted from an officer pressing on his neck with a knee for almost nine minutes. The incident, which happened in May, sparked worldwide outrage and birthed a wave of citizen scrutiny over the police’s use of force. People came out on streets to protest against the excessive abuse of power at the hands of police. Hundreds of death in police custody go unrecorded each year.