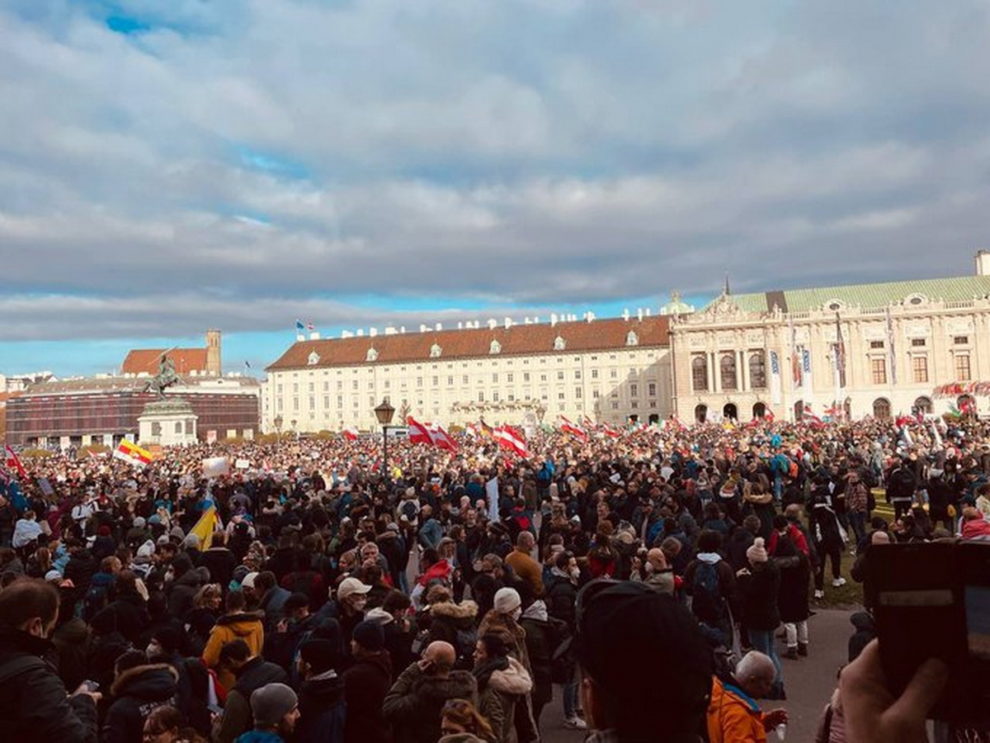 Protests were held across Europe this weekend in response to the tightened Covid-19 measures, amid rising new cases and a new wave of the pandemic.

According to the Xinhua news agency, an estimated 35,000 people gathered in central Brussels on Sunday to protest the strengthened measures, which include the mandatory use of the ‘COVID Safe Ticket’ (CST) and the requirement to wear face masks in areas where a CST is required.

Protesters carried banners reading “Together for Freedom” and “Resistance” as they marched near Brussels North Station.

Water cannons and tear gas were used by police to disperse demonstrators who threw fireworks at them.

Local police said 42 people were detained and two were arrested late Sunday, and the mayor of the City of Brussels, Philippe Close, “strongly condemned” the riots.

The protest against the Covid-19 restrictions in Rotterdam began on November 19 when several hundred protesters gathered in the city centre, throwing fireworks and torching cars, including at least one police vehicle.

The protest turned into a riot, and police used water cannons and tear gas to quell it.

Around 50 people were arrested, and four of them were injured and taken to the hospital for treatment.

On Monday, Dutch Prime Minister Mark Rutte condemned the riots and warned that the rioters would be punished to the fullest extent possible.

“These are not corona protests, but pure violence by idiots, which has nothing to do with demonstrating,” Rutte said

Restaurants and cafes across Greece remained closed in protest of the government’s new restrictions.

The measures have impacted thousands of businesses, with many facing permanent closure, and additional state assistance is urgently needed, according to the Panhellenic Federation of Restaurants and Related Professions (POESE) on Monday.

“We’re shutting down today so we don’t have to shut down forever,” protesters chanted during a rally in Athens’ centre.

The European Union (EU) is concerned about a new wave of Covid-19 infections as winter approaches in the Northern Hemisphere.

On November 19, the European Center for Disease Prevention and Control rated the situation in the EU as 8.3 out of 10, or “very high” (ECDC).

Wearing masks, hand-washing, and ventilation are important non-pharmaceutical measures that must be maintained in order to combat Covid-19, and “it remains extremely important that we follow the non-pharmaceutical interventions,” said Stefan De Keersmaecker, European Commission spokesperson for Health, on Monday.

Elisabeth Borne, France’s Minister of Labour, called on companies on Monday to strictly adhere to barrier gestures, particularly the mask mandate, in order to prepare the country for the fifth Covid-19 wave.

In light of the deteriorating situation, France’s Vaccine Strategy Orientation Council (COSV) suggested on Monday that a booster shot for all adults be considered.

Germany’s federal states have recently tightened their respective Covid-19 measures in response to the growing pandemic.

This year’s Christmas markets in Bavaria and Saxony have been cancelled, and Hesse has decided that only those who have been vaccinated or recovered from Covid-19 will be allowed to enter indoor areas of restaurants, sports facilities, and cultural institutions.

Massive protest in Brussels, Belgium against the restrictions and the covid health pass.
pic.twitter.com/g7ddsW6vug