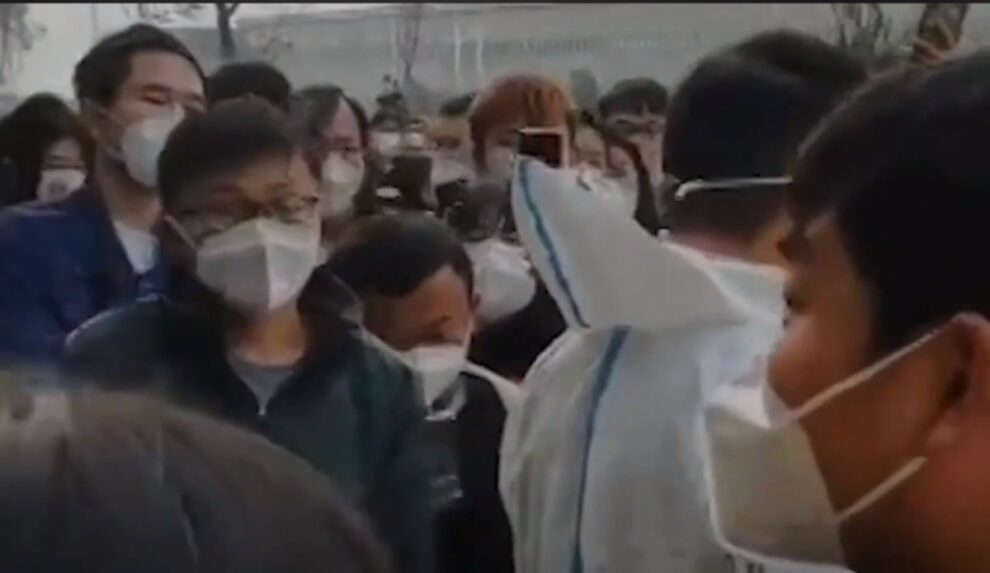 Scores of workers at the world’s largest iPhone factory in central China have fled after a Covid-19 surge shut down production and saw operator Foxconn lock down the facility.

The Taiwanese tech giant’s plant in Zhengzhou has been hit by a mass outbreak, with the company saying it is testing employees daily and keeping them in a closed loop.

Videos circulating on social media over the weekend appeared to show Foxconn employees fleeing the company’s campus in Zhengzhou and returning to their hometowns on foot, in a bid to avoid Covid travel restrictions.

In one of the videos, people lift suitcases as they climb up a hillside, while another shows people sitting with their luggage by the side of a road as a person in a hazmat suit sprays what appears to be disinfectant at them.

Local governments in the area surrounding the city issued notices asking Foxconn workers to register with authorities if they returned home and to complete several days of quarantine upon arrival.

The Taiwanese firm — which supplies iPhones to US tech firm Apple — said it was “cooperating with the government to organize personnel and vehicles” for employees who want to leave.

Foxconn has said it faces a “protracted battle” to stamp out the Covid-19 outbreak, but has not said how many of the more than 200,000 staff are affected or in isolation.

Foxconn has been accused of forcing employees who are unwell to work and not providing medical treatment or timely meals throughout the outbreak.

And China Labor Watch, a New York-based NGO, has also accused the firm of hiding the number of Covid-19 infections among its employees and forcing sick people to continue working, citing an internal message to staff as well as workers at the factory.

Foxconn on Sunday insisted that it “is making every effort” to ensure its employees are being looked after.

China is the last major economy committed to a zero-Covid strategy, persisting with snap lockdowns, mass testing and lengthy quarantines in a bid to keep infections down.

Authorities in Henan vowed on Monday to snuff out any outbreaks, with provincial Communist Party chief Lou Yangsheng urging officials to “go all out to fight and win the war of annihilation against the epidemic”.

There would be “absolutely no relaxation” in disease control work, especially in densely populated areas like schools, hospitals, factories, and elderly care homes, Lou said, according to a statement on a provincial government social media account.

Officials “must resolutely overcome psychological slackness, war-weariness and wait-and-see thinking, and fully implement work requirements in a strict, meticulous and practical way”, the statement quoted Lou as saying, without referencing the situation at Foxconn.