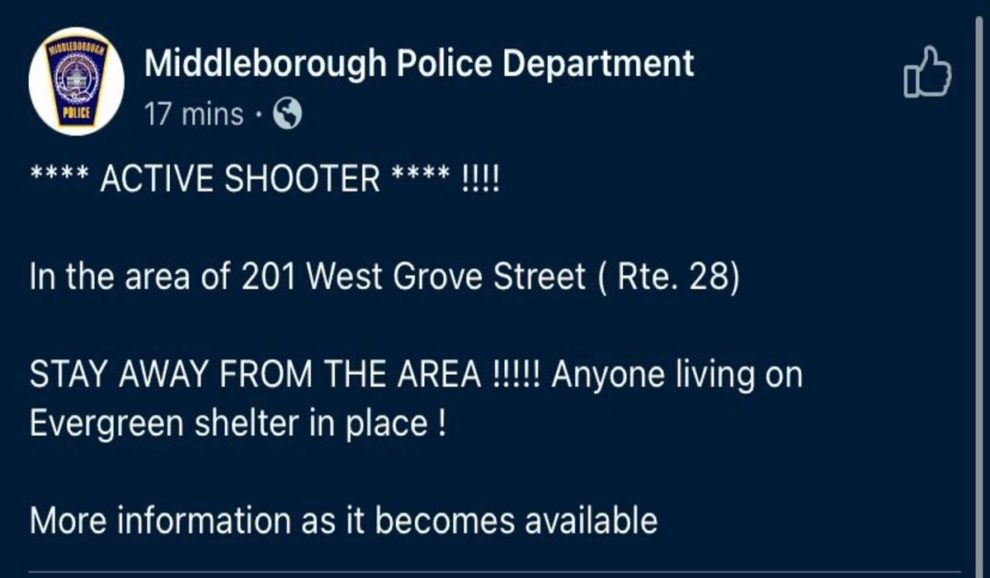 The Middleborough Police Department is looking for an active shooter near 201 West Grove Street.

Police specifically advised anyone who lives along Evergreen Drive, which leads to the Woodlands Apartments, to take cover. Everyone else was told to stay away from the area.

The Massachusetts State Police have tweeted that they are assisting Middleboro Police with the search.

Middleboro is located to the south of Boston and to the west of Plymouth. The shooting took place near Interstate 495.

UPDATE ON THE ACTIVE SHOOTER INCIDENT:

“There is no current active shooter situation”

We can confirm via @MiddleboroughPD that police are searching for a shooting suspect who fired multiple shots at a @MassDOT facility in town. There is not a current active shooter but a shelter in place is in effect for the immediate area. Additional details forthcoming.

There have been no injuries reported at this time and residents in the area of 201 West Grove St. (Route 28) are asked to shelter in place while police search for the suspect.

At approximately 9:05 a.m., Middleborough Police responded to a Massachusetts Department of Transportation public works depot, located at 201 West Grove St., for a report of shots fired.

Approximately four to five shots were fired inside the facility.

The suspect then fled on foot into nearby woods.

Police have set up a perimeter and are actively searching for the suspect. The suspect was described by witnesses as a light skinned Black male or Asian male, approximately 5 feet 10 inches tall, wearing a bucket hat.

The suspect is believed to be armed and dangerous. Anyone who believes they see someone fitting this description should call 911. Do not approach the man.