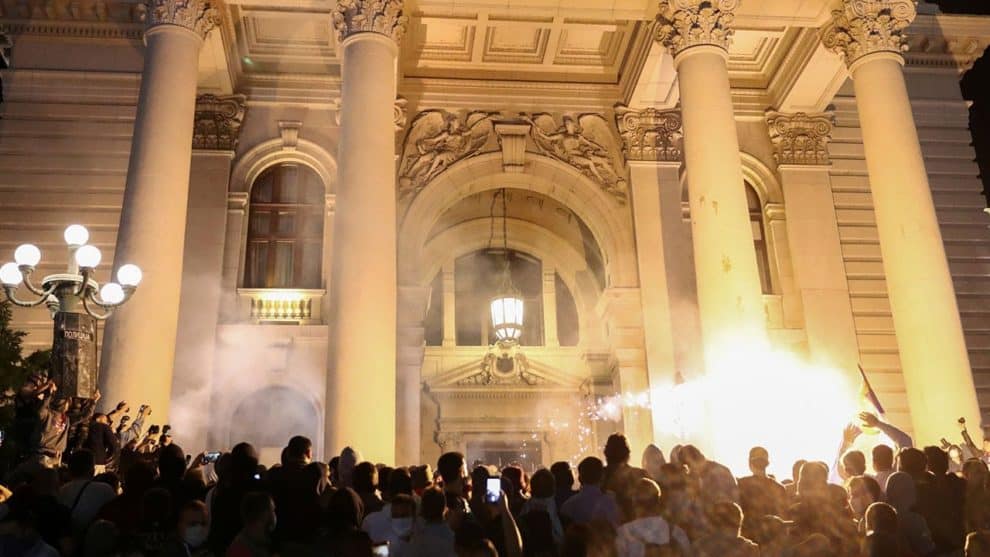 The tension in the city of Belgrade escalated as many are reportedly outraged by the government’s coronavirus response.

President Aleksandar Vucic backtracked from his plan to apply the second lockdown for coronavirus in Belgrade this week, but the decision didn’t stop protestors from firing flares and pelting stones while trying to storm the parliament building.

A lot of users on Twitter reported that the protests in Belgrade, Serbia is not against COVID-19 lockdown, but it is against the ‘dictatorship policies’ of the government. One user tweeted, “PROTESTS IN SERBIA ARE NOT AGAINST COVID CURFEW THEY ARE AGAINST TOTALITARIAN DICTATORSHIP”.

YouTube and other platforms are filled with violent videos of the protests going in Belgrade, Serbia. Let’s have a look at some of the viral ones here:

What’s happening in Belgrade rn and in Serbia general:
These three innocent people that were sitting on the bench were attacked brutally by the police because there was a protest going on. They weren’t the only victims tonight of police brutality. + pic.twitter.com/ti6E9emBSW

Users also took to Twitter to share their thoughts on Belgrade, Serbia protests, many shared videos and photos. Here are some comments:

@brezaleksandar: The second night of Belgrade protests: as brutal as it gets, folks. Mentions of draconian penalties for those arrested, and Huawei-brand facial recognition cameras used to identify those who avoid getting trampled over by 30+ officers.

@ToastedOnOff: My friends help us spread it! We are currently having protests in Serbia, Belgrade. Fight against the totalitarian regime and everything that Vučić stands for! Help us!

@Serdjosega: The main TV channel in Serbia RTS, the BBC of Serbia, played a Jackie Chan movie while thousands of people gathered in front of the Parliament in Belgrade to protest.

@alrakaj: Belgrade protest gets nasty revealing government’s repressive & autocratic tendencies. The rest of #Balkans watches in awe as events unfold. Many can be forgiven for wondering if such brutality will be internationally condemned. If not, expect more of the same in Serbia & elsewhere in WB.

@Sashhhka: Info is that there is some number of hooligans trained by the special forces of the police in Makis (part of Belgrade) for these purposes. Some of them were seen during the tonight’s protest just infiltrating in a bigger group of calm younger protestors.

@tuckcomatus: Several people have commented that the protesters throwing rocks and otherwise behaving violently may be undercover cops or otherwise aligned with the govt. Can’t prove that all the troublemakers are infiltrators, of course. But KRIK reporting suggests that at least some are.