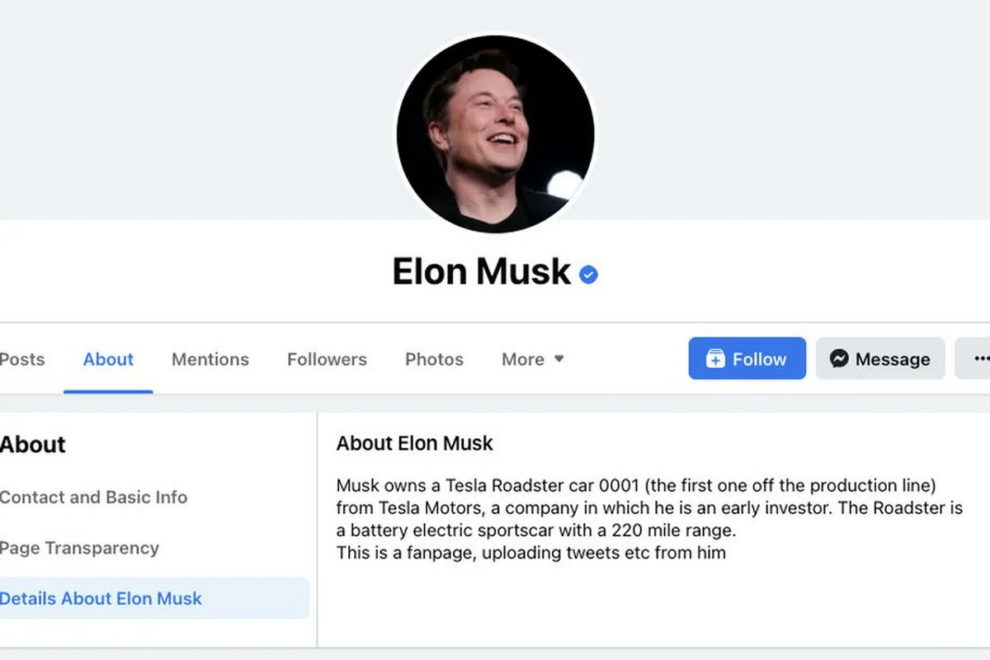 A Facebook fan page for Tesla CEO Elon Musk with 153,000 followers was verified as the official page representing the Tesla Technoking – in violation of Facebook’s own rules – but the page is now inaccessible.

It’s unclear whether Facebook removed it or the owners chose to make it unavailable.

To be clear, the page wasn’t pretending to be Musk; in its About section, it explicitly stated that it was a fan page.

“Musk owns a Tesla Roadster car 0001 (the first one off the production line) from Tesla Motors, a company in which he is an early investor. The Roadster is a battery electric sportscar with a 220 mile range. This is a fanpage, uploading tweets etc from him,” the page mentioned.

The page was not created as a fan page for Elon Musk.

The page was created on July 28, 2019 to represent a “Kizito Gavin,” which is the reversed name of soccer player Gavin Kizito, according to the Page Transparency tab, which shows some history of a page, who manages it, and whether it runs ads.

The page’s name changed six times in 2021, the most recent being Elon Musk twice (somehow) on October 17. The Page Transparency section also stated that the page’s administrators were based in Egypt. Musk currently resides in Texas.

It’s also worth noting that the URL for the page omitted the word “official,” which doesn’t seem very official.

When the page was verified is unknown. According to Facebook’s verification rules, the company has “confirmed that the Page or profile is the authentic presence of the public figure or brand it represents.”

To be verified on Facebook, users must fill out a form that asks for official identification in the form of a driver’s licence, passport, national identification card, tax filing, recent utility bill, or articles of incorporation, among other things.

Viagra could help treat Alzheimer’s disease, according to a new research