On social media, there are false reports circulating that Facebook has a plan of opening an office in Pakistan.

Samaa TV reported that Facebook is in talks with the Director of the Federal Investigation Agency (FIA), Humayun Bashir. However, the FIA confirmed in a press release that these reports are false.

“It has been noticed that a fake news regarding opening of Facebook office in Pakistan is circulating in media.” said the FIA press release. “No such official statement was made by FIA and the same is strongly denied.” it was added. Furthermore, the press release stated that the story mentioned an FIA officer’s name (Humayun Bashir), which is false.

“FIA strongly condemns publishing of such baseless stories without confirmation and authentication.” the press release concluded.

Many media outlets reported that Facebook’s representative Michael and FIA Director Bashir were in talks about US social media company opening an office in Pakistan. However, the Federal Investigation Agency (FIA) stated in a press release that the news is false.

Earlier in 2021, in an interview aired on private news channel, Zia Ullah Khan Bangash, Advisor to Chief Minister Khyber Pakhtunkhwa (KP) Mahmood Khan on Science and Technology, claimed that “Facebook will open an office in Pakistan.” However, the news was denied at that time by Facebook spokesperson. 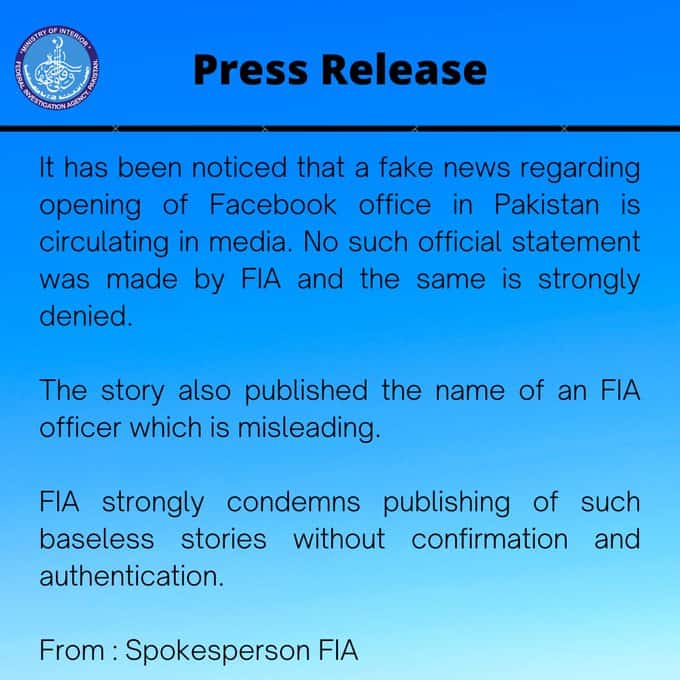