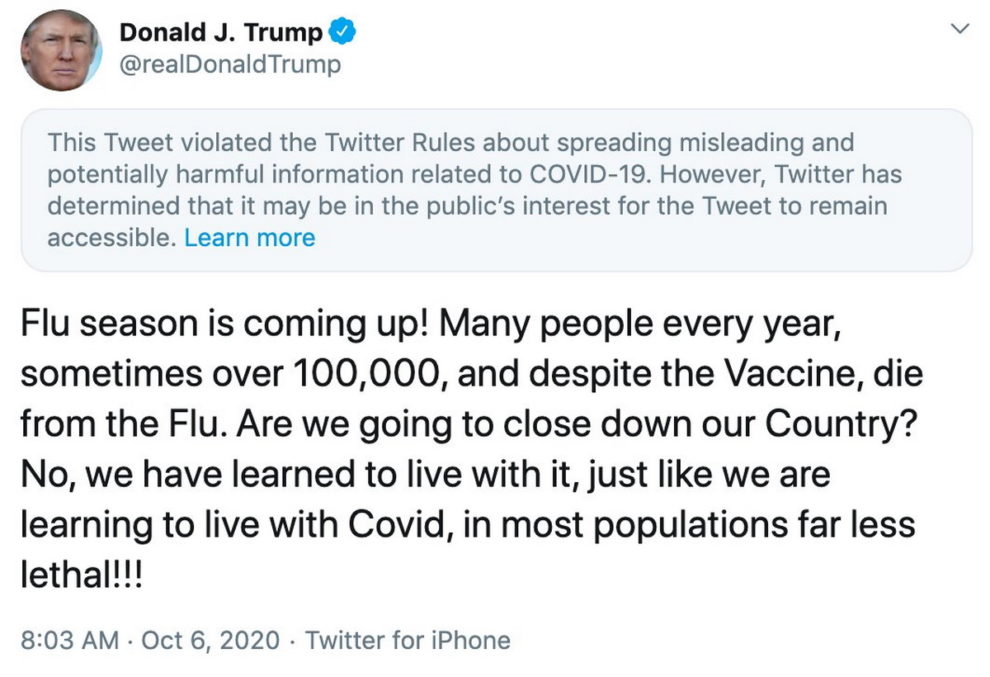 Facebook has removed a post by Donald Trump where he falsely claimed that Covid-19 is less harmful than the seasonal flu. Andy Stone, a Facebook spokesperson reportedly confirmed that Facebook took down the post for breaking rules regarding spreading misinformation in relation to Covid-19.

President Trump’s stance regarding coronavirus has been problematic since the beginning. In his post, he once again attempted to play down the threat of Covid-19. While being hospitalized at the military hospital for his own treatment of Covid-19, he is still adamant about taking the deadly virus lightly. His post on Tuesday falsely equated the virus that had resulted in a pandemic to the seasonal flu. 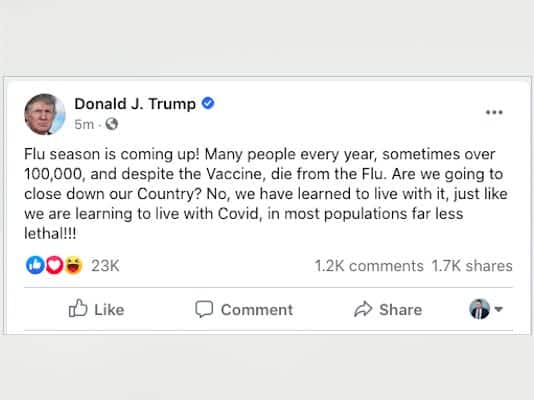 In August, Facebook and Twitter had also removed a post by Trump that contained false assertions about the nature of Covid-19. The post included a video of Donald Trump when he was being interviewed by Fox News, during the video, Trump falsely claimed that children were “almost immune” to the virus. Such claims and assertions benefit no one and only increase risks related to the virus.

There is an extensive amount of evidence that suggests that children who contract Covid-19 generally experience milder symptoms than most adults do. However,  this does not mean that children are immune to the virus. Some children have become severely ill and even died after testing positive for COVID-19. “This video includes false claims that a group of people is immune from Covid-19 which is a violation of our policies around harmful COVID misinformation,” a Facebook spokesperson said in relation to Trump’s Facebook post in August.

Twitter has also labeled Donald Trump’s tweet as “misleading and potentially harmful information related to COVID-19”. In his tweet, Donald Trump is claiming that the number of people that die per year due to the seasonal flu is much more than those who die from the virus.

The Coronavirus disease is the first-ever pandemic in history where technology and social media are being extensively used to help people keep safe. Social media is a tool for keeping the public informed, productive and connected at a time like this. Several people are relying on technology at this time to stay connected with their friends and family and also to learn coping mechanisms. At such a time when people are especially reliant on social media, spreading misinformation can be extremely harmful.

Misinformation can hinder the global response and jeopardize existing measures in place to control the spread of the virus. In relation to this, the UN Secretary-General launched the United Nations Communications Response initiative to curb the circulation of information that is false.