Ghost Recon: Wildlands players have been experiencing issues with the ‘Ribera-40002’ error code pop-up. Players are unable to connect to the game server due to the persisting problem.

The issue with the error code has been around for months. Some people tried to configure their router and forwarded ports, while others switched off overlays. Players even tried to reinstall the game, but there was nothing that resolved the problem.

“The notification says I’m connected, but it shows offline in the campaign lobby. I’d tried forward porting, turning off overlay, and reinstalling the game. I bought a copy for my friend this weekend, and we can’t play together. Anyone else is still having problems too?” posted one player two months ago. 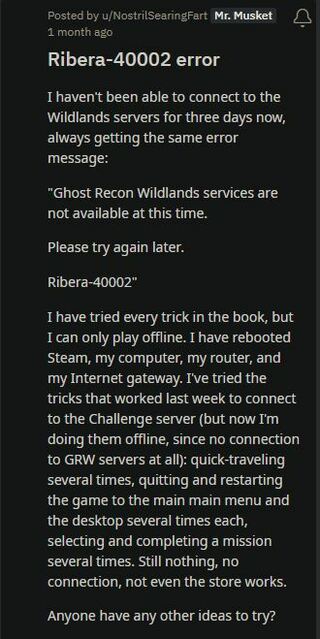 The game developers have been quick to respond to players’ complaints.

“Hello, and I’m sorry to see that you and your friend have not been able to play together due to this connection issue. I’ve moved this post to our Player Support section so that one of our agents can assist,” the support team replied.

“I’ve been trying to play wildlands with a friend and we’re constantly having issues, had error codes Ribera-40002, Ribera-1000B, Ribera-8000 B, Tarija-00100. After port forwarding and messing around with anti-virus and firewall and every guide I’ve seen, we managed to connect for a solid 10 minutes before getting a random instant disconnect (even though it still says I’m online). Does anyone have any clue as to how to fix this?” posted another person.

Ubisoft Support has acknowledged the issue and said the developers of the Ghost Recon: Wildlands are working to resolve Ribera-40002 error message and server issues.

On August 15, Ubisoft’s team posted that they have resolved the server degradation issue with multiple games. However, multiple players reported that the developers did not fix the issue with Ghost Recon Wildlands and the server problem with the game still persist.

However, there are few workarounds for people to continue playing the game. 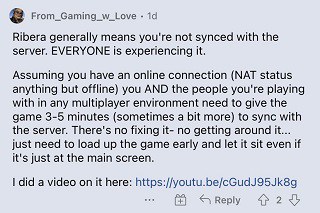 A user shared on Reddit: “I’ll just turn off the Wifi and launch the game then turn it back on. Problem solved.”