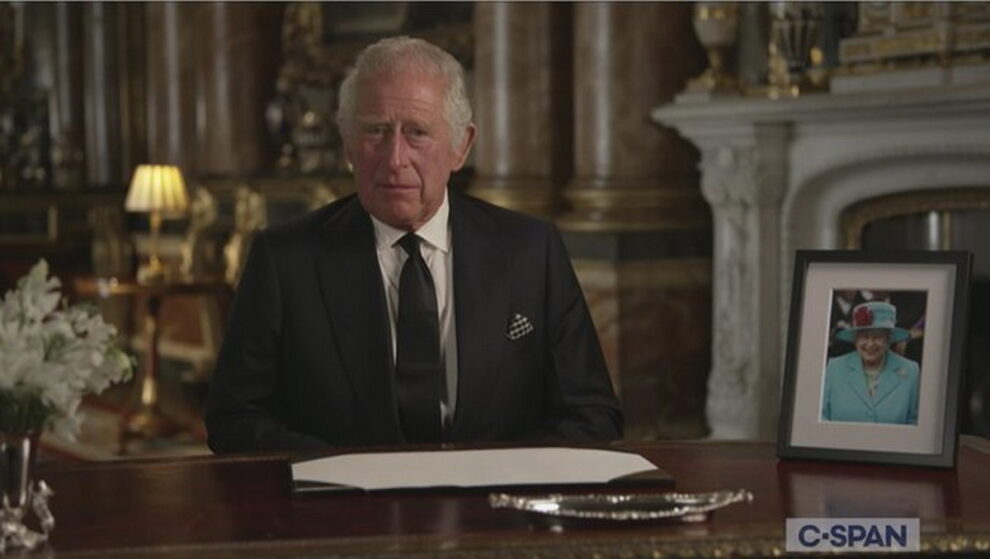 King Charles III and his wife Queen Consort Camilla narrowly avoided being hit with eggs thrown at them during a visit to northern England on Wednesday, leading to one arrest.

The 73-year-old monarch and Camilla, 75, were targeted with three eggs which landed near them during a walkabout in York, before they were ushered away by minders.

As the incident occurred, a man was heard shouting “this country was built on the blood of slaves” and “not my king” before he was detained by several police officers, footage aired by broadcasters showed.

The protester also booed the royal couple before he appeared to lob the eggs at them, according to reporters present.

Other people in the crowds that had gathered at the historic Micklegate Bar location for the visit started chanting “God save the King” and “shame on you” at the protester.

Charles and Camilla continued with a traditional ceremony to officially welcome the sovereign to the historic city by its lord mayor, as police took the suspected perpetrator into custody.

“A 23-year-old man was arrested on a suspicion of a public order offence,” North Yorkshire Police said in a statement. “He currently remains in police custody.”

UK media named him as a former Green Party candidate and activist with the Extinction Rebellion environmental protest group.

The royals were in York to attend the unveiling of a statue of Charles’s mother Queen Elizabeth II, the first to be installed since her death on September 8.

The new king, who immediately ascended to the throne that day, made no reference to the incident as he later delivered a short speech.

On Tuesday, Charles met artists in another Yorkshire city, Leeds, who had taken part in a project exploring Britain’s role in slavery — and revealed he was open to discussions on the topic.

“He is ready to have these conversations and see what work can be done,” Fiona Compton, a St Lucian artist and historian who knows the monarch and was involved in the project, told reporters afterwards.

“He agrees, this is British history, it should not be hidden.

“In the same way we are speaking about the Holocaust, we should be open to speaking about Britain’s involvement in the slave trade,” added Compton, whose father was prime minister of St Lucia.

The issue has increasingly confronted the royal family, as growing republican movements in Commonwealth countries with the British monarch as head of state call on the Crown to apologise for the slave trade and atone for colonisation.

During a tour of the Caribbean by the king’s eldest son Prince William earlier this year, he faced protests about past royal links to slavery, demands for reparations and growing republican sentiment.

Domestically, Charles is less popular than his late mother, who maintained highly favourable ratings throughout her record-breaking seven-decade reign.

The latest polling by YouGov found 44 percent of adults had a positive opinion of him, compared to nearly three-quarters for Queen Elizabeth II.

During the national period of mourning for the queen in September, republican movements said anti-monarchist views were drowned out.

There was criticism of police handling of protesters who publicly questioned the hereditary principle of Charles’s accession.

Meanwhile in London on Wednesday, a man who was “fixated” on accessing royal grounds was spared jail after twice trespassing at Buckingham Palace last year.

Daniel Brydges, 33, was sentenced to 12 weeks’ imprisonment, suspended for 18 months, after previously pleading guilty to two counts of trespassing on a protected site and criminal damage.