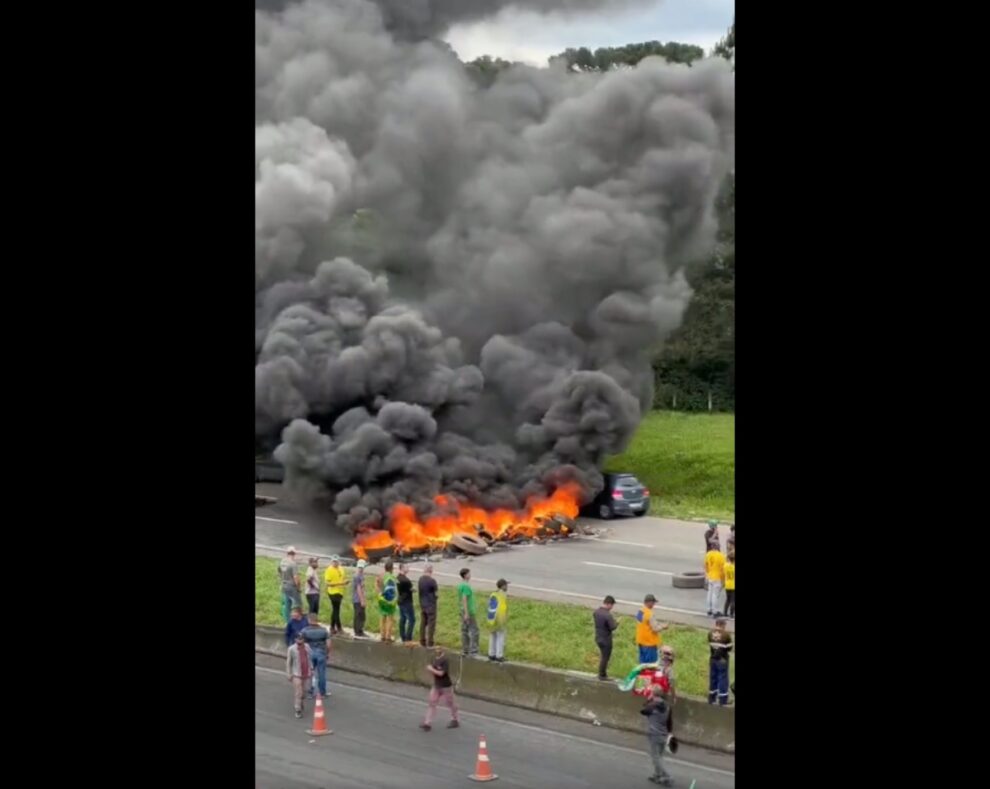 Thirty-six hours after official results showed he had lost Sunday’s presidential run-off with only 1.8 percentage points, Bolsonaro has yet to concede defeat, fanning concerns he may try and challenge the result after months of attacking the electoral system as fraudulent.

Protesters wearing the yellow and green of the Brazilian flag, which the outgoing president has adopted as his own, said they would not accept the outcome of the election.

“We will not accept losing what we have gained, we want what is written on our flag, ‘order and progress’. We will not accept the situation as it is,” Antoniel Almeida, 45, told AFP at a protest in Barra Mansa, Rio de Janeiro.

On Monday night Judge Alexander de Moraes of the Supreme Court ordered police to disperse the blockades immediately. He was acting in response to a request by a transport federation that complained it was losing business.

The mounting tension follows a dirty and divisive election campaign between the hardline conservative Bolsonaro and his nemesis Lula, who returns to office in a dramatic comeback.

Brazil’s president between 2003 and 2010, Lula crashed into disgrace in a corruption scandal that landed him in jail before his conviction was thrown out due to bias from the lead judge. However, he was not exonerated.

The election outcome showed just how polarized the country is between the two very different leaders.

However Bolsonaro’s silence after months of alleging fraud in the electoral system and a conspiracy against him had the country on a knife-edge.

“Anyplace else in the world, the defeated president would have called me to recognize his defeat,” Lula said in his victory speech to a euphoric sea of red-clad supporters in Sao Paulo on Sunday night.

There are fears Bolsonaro, 67, could attempt a Brazilian version of the US Capitol riots which rocked that country after his political role model, former US president Donald Trump, refused to accept his election defeat in 2020.

But the Brazilian leader may find himself isolated.

Some key Bolsonaro allies have publicly recognized his loss, including the powerful speaker of the lower house of Congress, Arthur Lira.

And international congratulations for Lula poured in from the US, China, India, France, Britain, South Africa and numerous others.

Lula acknowledged the “immense” challenges facing his government when he is sworn in on January 1, citing a hunger crisis, the economy, bitter political division, and deforestation in the Amazon.

He is likely to face a hostile Congress packed with allies of Bolsonaro.

“Lula will have to show a lot of political skill to pacify the country,” said political scientist Leandro Consentino of Insper university in Sao Paulo.

Bolsonaro became the first incumbent president in Brazil not to win re-election in the post-dictatorship era after a four-year term in which he came under fire for his disastrous handling of the Covid-19 pandemic, which left more than 680,000 dead in Brazil.

He also drew criticism for his vitriolic comments, polarizing style and attacks on democratic institutions and foreign allies.

Lula’s victory has been hailed by environmentalists and governments hoping he will make halting Amazon destruction a key priority.

The European Union’s leadership voiced hope Lula’s win would lead to ratification of a trade deal with South American bloc Mercosur, long stalled over concerns about rampant deforestation under Bolsonaro.

Norway announced it would resume paying nearly $500 million in aid for protecting the world’s biggest rainforest, which it halted in 2019 over.