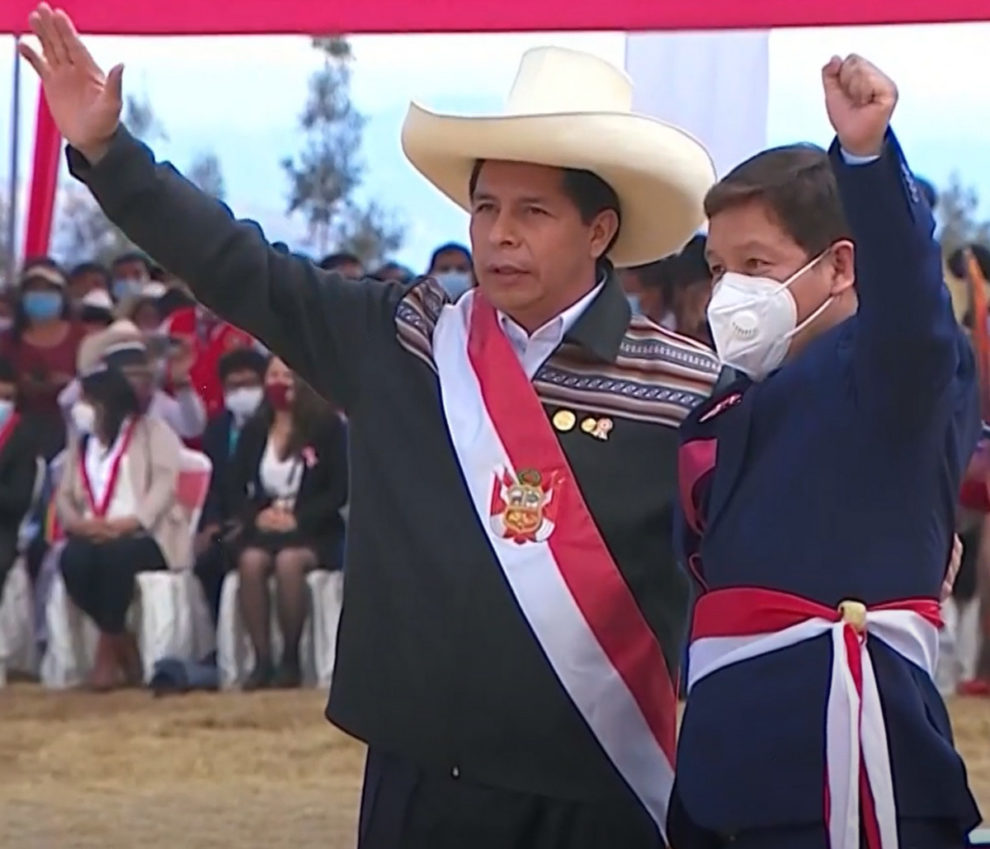 Protests against Peru’s new government grew this weekend, with police clashing with angry demonstrators calling for a national strike, fresh elections and the release of detained former president Pedro Castillo.

The protests have swollen steadily since the South American country’s legislature on Wednesday threw out the leftist Castillo after he tried to dissolve Congress and rule by decree.

Dina Boluarte, a former prosecutor who had served as Castillo’s vice president, was quickly sworn in to replace him.

On Saturday she introduced her new cabinet, a group with an independent and technocratic profile and including eight women.

After his impeachment, Castillo was quickly arrested, and on Sunday demonstrators in cities across the country’s interior — including Cajamarca, Arequipa, Huancayo, Cusco and Puno — demanded his release.

New clashes broke out Sunday between protesters and police in the southern city of Andahuaylas, where 16 civilians and four police officers were injured the day before. Protesters fired slingshots and hurled stones, while police responded with tear gas.

The right-leaning Congress said it would convene in emergency session Sunday afternoon to discuss the crisis.

Meanwhile, rural unions and organizations representing Indigenous peoples called for an “indefinite strike” beginning Tuesday in support of Castillo, himself the son of a peasant family.

They demanded the suspension of Congress, early elections and a new constitution as well as Castillo’s immediate release, according to a statement from the Agrarian and Rural Front of Peru, which groups about a dozen organizations.

The Rural Front contends that Castillo “did not perpetrate a coup d’etat” on Wednesday when he announced the suspension of Congress and said he would be ruling by decree.

In Lima, the leftist party Free Peru organized a rally Sunday afternoon at the capital’s historic Plaza San Martin, the epicenter of the country’s political demonstrations.

With his background as a rural teacher and union leader, and with little contact with the nation’s elites, Castillo has always drawn his strongest support from Andean regions, while struggling to find backing in coastal Lima.

The ousted president was arrested Wednesday while on his way to the Mexican embassy to seek asylum, and prosecutors have charged him with rebellion and conspiracy.

The demands for new elections come as recent polls show nearly nine in 10 Peruvians disapprove of the nation’s legislature.

Political analyst Giovanna Penaflor told AFP that Boluarte — who on Friday did not rule out calling early elections — needs to make clear whether she intends to lead a transitional government or to remain in power until 2026.

“She should be clear that her role is to facilitate new general elections,” Penaflor added, saying that doing so would provide needed stability and “allow this cabinet to not be like those in the past.”

Peru is now on its sixth president since 2016.

Castillo’s 17-month rule was overshadowed by six investigations against him and his family, mass protests demanding his removal, and a power struggle with the opposition-backed Congress.