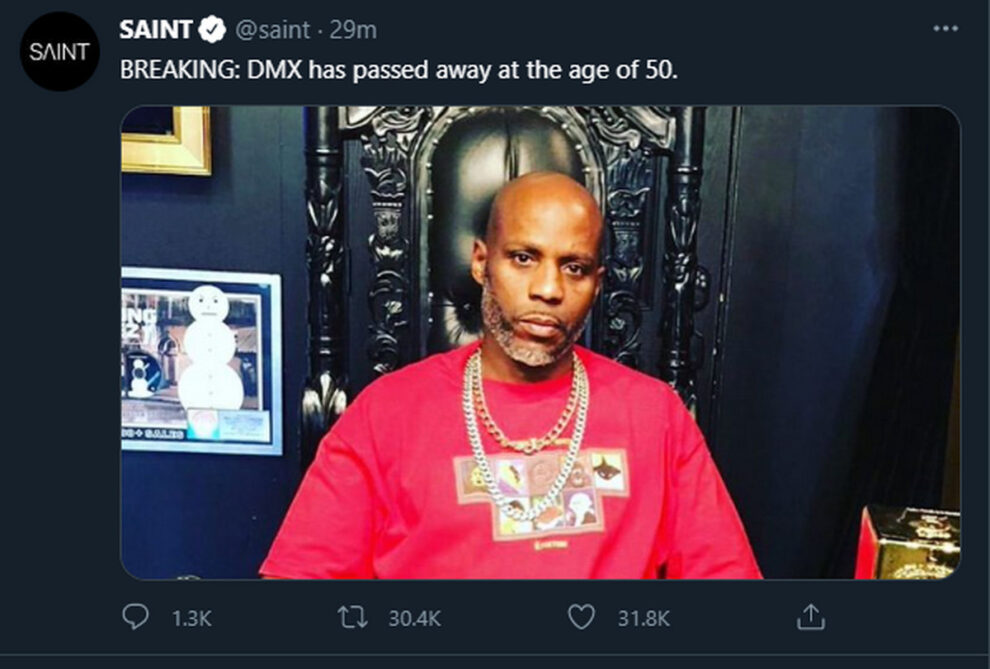 UPDATE 12:28 EST: Family of Rapper DMX confirmed on Friday that Earl Simmons is dead, according to WNYT NewsChannel 13. On Thursday, manager of DMX refuted the rumors that were circulating about his death, by posting a clarification in a video.

However, the news is now confirmed that the famous rapper is dead after being on life support for the past few days at White Plains Hospital.

Twitter and other social media websites are filled with rumors that legendary rapper DMX is dead. However, there’s no official confirmation about the DMX’s death news.

Rumors say DMX is dead at 50

The news started to circulate after an unknown website named GossipOnThis said that DMX is dead. The headline of the article reads, “DMX Dead at 50 Years Old After Being Taken Off Life Support Following Overdose”

According to the website, Earl Simmons, better known as the legendary rapper DMX, has died at the age of 50 years.

The website quotes TMZ to validate its point, here’s what the article says:

“The extremely sad news comes after TMZ reported earlier today that he hadn’t regained any brain function in the days since he was hospitalized.”

According to TMZ, Earl ‘DMX’ Simmons was rushed to the hospital after collapsing at home. And he was admitted in the ICU in critical condition.

According to last update on his health reports, DMX remained in a coma at a New York hospital on Wednesday after he suffered a heart attack last week.

No official or family member has so far confirmed that DMX is dead.

“Every good reporter I know lives in absolute dread of declaring someone dead who isn’t. This is the time to pump the brakes.” wrote BuzzFeed reporter on Twitter after hearing DMX’s death rumors

Saint wrote that they deleted the earlier tweet out of respect for Rapper DMX. In their latest tweet, Saint quoted a close friend of DMX, who they claimed posted the news of DMX’s death on an Instagram post. Here’s what Saint wrote in their new tweet:

“We have deleted the tweet out of respect for DMX and his loved ones. A close friend of DMX posted this on her Instagram story, has since been taken down. We apologize for any confusion. Prayers still going out to him and his family”

We have deleted the tweet out of respect for DMX and his loved ones.

A close friend of DMX posted this on her Instagram story, has since been taken down.

We apologize for any confusion.

Prayers still going out to him and his family❤️ pic.twitter.com/K3KlxGIuIH

At the time of writing no official confirmation about DMX death is reported. We will update this article as soon as we hear anything credible on it.