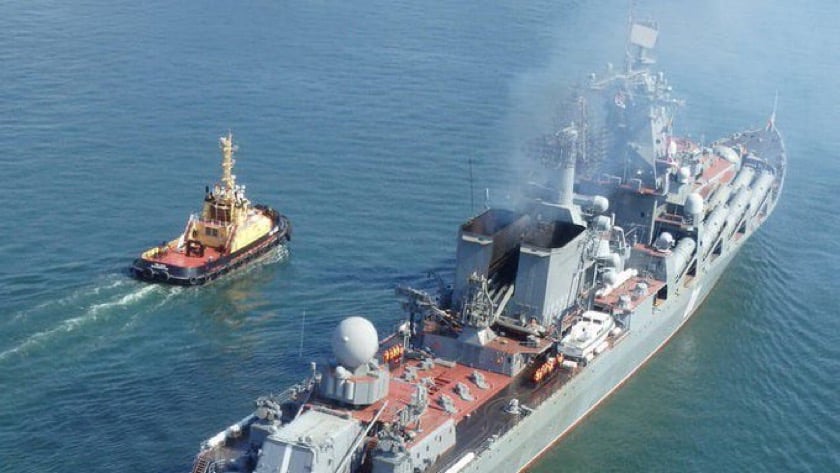 “As a result of a fire, ammunition detonated on the Moskva missile cruiser. The ship was seriously damaged,” the Russian defence ministry was quoted as saying, adding that the cause of the fire was being determined and that the crew had been evacuated.

Earlier, the governor of Odessa said that Ukrainian forces had hit the Moskva with missile strikes.

Ukrainian presidential advisor Oleksiy Arestovych said that “a surprise happened” with the Moskva.

“It burns strongly. Right now. And with this stormy sea, it is unknown whether they will be able to receive help,” he said in a YouTube broadcast.

“We don’t understand what happened.”

The Moskva was originally built in the Soviet era in Ukraine’s Mykolaiv, and entered service in the early 1980s, according to Russian media.

With a crew of 510, it was previously deployed in the Syria conflict where it served as naval protection for the Russian forces’ Hmeimim airbase.

The missile cruiser carries 16 P-1000 Vulkan anti-ship missiles as well as an array of anti-submarine and mine-torpedo weapons, the reports said.

The Moskva gained notoriety early in the war when it called on Ukrainian border troops defending the strategic Snake Island to surrender, only to be defiantly refused.

The troops in question were initially believed to have been killed, but in fact were taken captive.

They were released as part of a prisoner exchange with Russia in late March, according to the Ukrainian Parliament.

Ukraine’s human rights ombudswoman Lyudmyla Denisova said the soldiers had described being taken to an unknown location where they were held in freezing conditions and suffered frostbite.