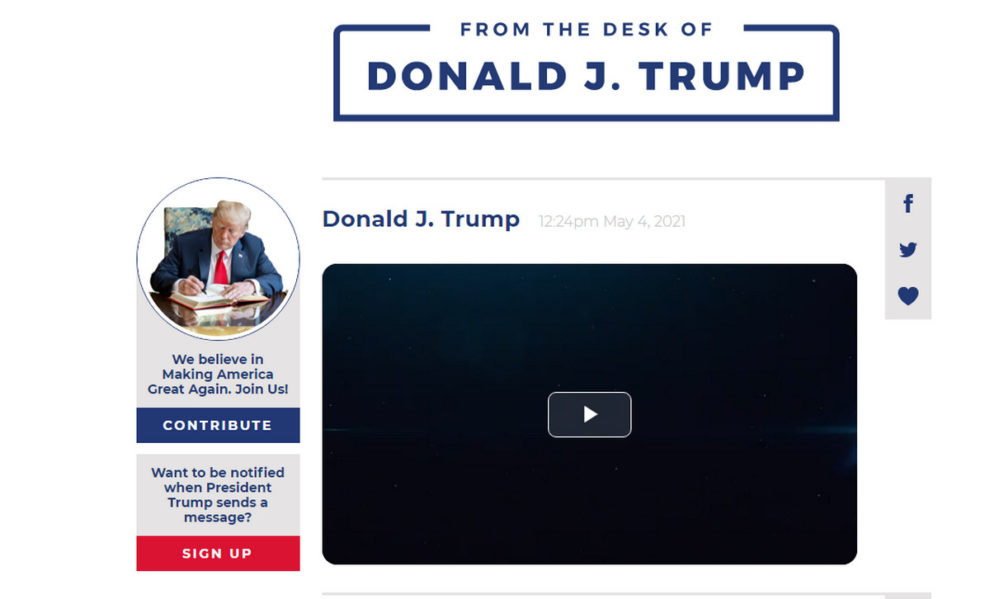 45th President of the US Donald Trump has launched a new platform called ‘From the Desk of Donald J. Trump’ to communicate with his supporters, in competition with platforms such as Twitter and Facebook, which have banned his accounts.

Trump’s social media-like platform site, “From the Desk of Donald J. Trump,” includes videos from the former president as well as statements from his leadership PAC that have been distributed via email for several weeks.

“Over the past four years, my administration delivered for Americans of all backgrounds like never before,” Trump says on the website. “Save America is about building on those accomplishments, supporting the brave conservatives who will define the future of the America First Movement, the future of our party, and the future of our beloved country.”

Supporters can sign up (here) to be notified when Trump posts a message on his website, similar to how other social media platforms work.

The platform launch also comes just a day before Facebook’s Oversight Board is expected to announce its decision on whether to suspend Trump from Facebook and Instagram indefinitely.

UPDATE: The new communication tool is not the ‘planned social media website’. Donald Trump’s senior advisor Jason Miller says, “President Trump’s website is a great resource to find his latest statements and highlights from his first term in office, but this is not a new social media platform. We’ll have additional information coming on that front in the very near future.”