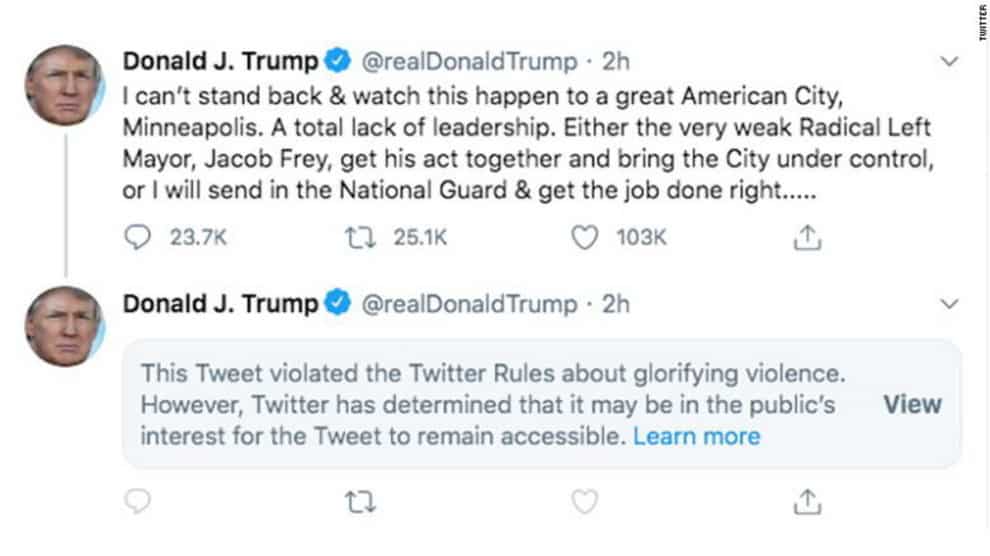 On Friday morning, Twitter confirmed that President Trump’s tweet, where he threatened shooting some protesters in Minneapolis, has violated its rules about glorifying violence. Although the company said it’s leaving the tweet in the public interest, it also added an unprecedented warning to it. That’s to warn users that the post by the President glorifies violence.

A few hours ago, President Trump posted on its Twitter account about happenings in one of the American cities, Minneapolis. According to the tweet, Trump said he can’t stand back and watch the situation of things in the city at the moment. Here’s what he tweeted below:

“I can’t stand back & watch this happen to a great American City, Minneapolis. A total lack of leadership. Either the very weak Radical Left Mayor, Jacob Frey, get his act together and bring the City under control, or I will send in the National Guard & get the job done right.”

Shortly after the tweet, he posted another one under it as a thread. And this time it’s more of a threat to shoot people, in the response to civil unrest in Minneapolis.

“These THUGS are dishonoring the memory of George Floyd, and I won’t let that happen. I just spoke to Governor Tim Walz and told him that the Military is with him all the way. Any difficulty and we will assume control but, when the looting starts, the shooting starts. Thank you!” 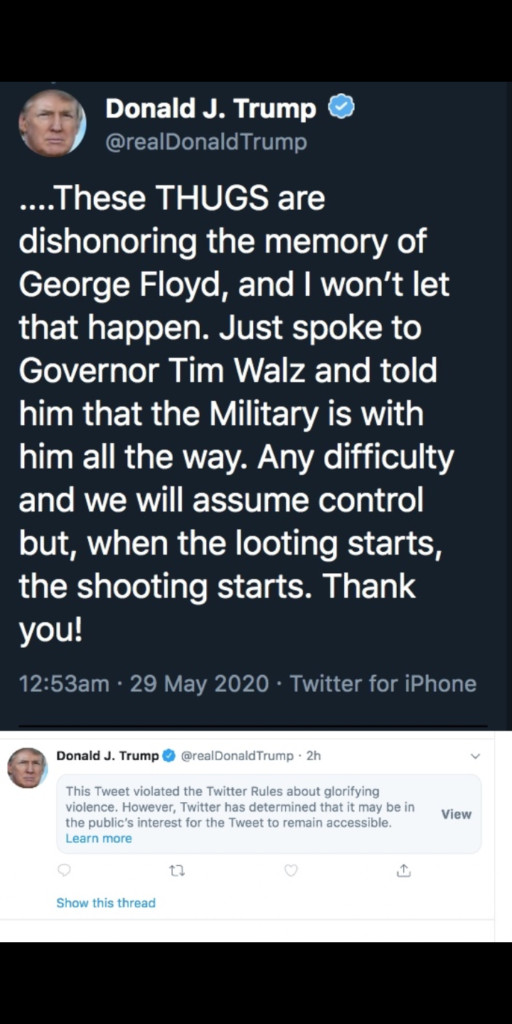 According to Twitter’s action, it prevented users from viewing the President’s post, ensuring that they first read the warning describing the rule violation. Apart from that, the company also blocked users from liking, replying, or retweeting the particular post by Trump.

President Trump’s message came as a result of the third night of protests following the death of George Floyd. Before Floyd’s death, he’s filmed complaining about not able to breathe as a result of a white police officer pinning him down with his knee.

On Monday night, Floyd died after a white police officer arrested him for alleged forgery. Reports have it that the Minneapolis police have released a transcript of the 911 call that led to Floyd’s arrest. Here’s a brief of  what the alleged forgery report says below:

“Um someone comes our store and gives us fake bills and we realize it before he left the store, and we ran back outside, they were sitting on their car. We tell them to give us their phone, put their (inaudible) thing back and everything and he was also drunk and everything and return to give us our cigarettes back and so he can, so he can go home but he doesn’t want to do that, and he’s sitting on his car cause he is awfully drunk and he’s not in control of himself.”

After the demise of Floyd, there were fires and destructive protests in Minneapolis. So far, it has lasted up to 3 nights. However, because President Trump couldn’t take it anymore, he went to his Twitter account and threatened to involve the military.