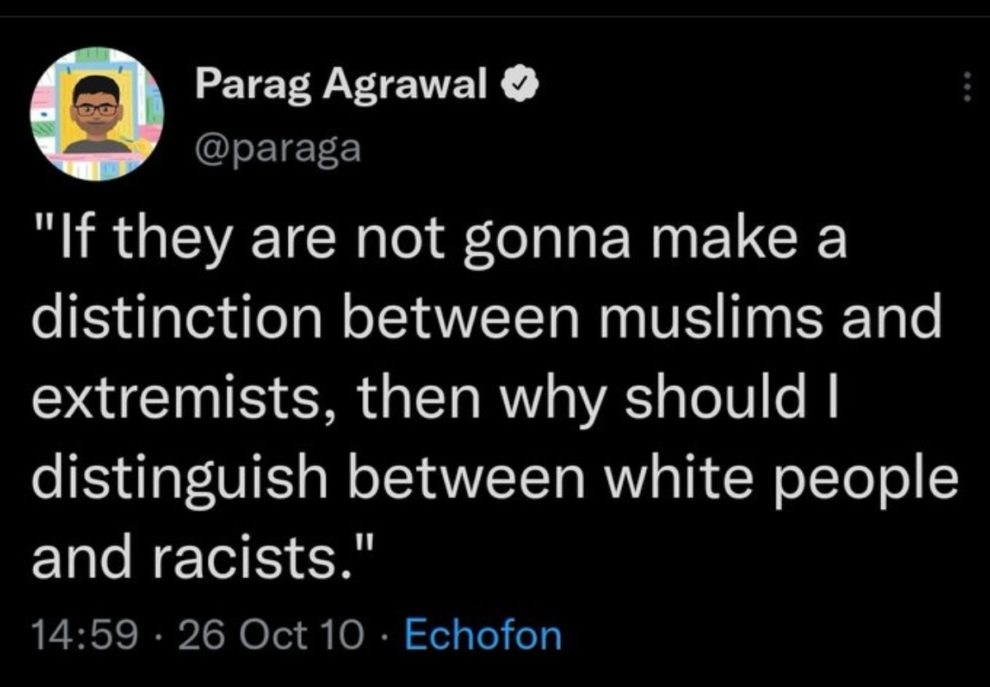 Twitter’s new CEO, Parag Agrawal, previously stated that the platform should “focus less” on free speech and tweeted in 2010 that there is no difference between white people and racists. New CEO’s old statements have sparked outrage on social media platform.

In an interview with Technology Review in November 2020, Agrawal, then Twitter’s CTO, said in response to a question that Twitter should not be “bound by the First Amendment” and should “focus less” on free speech:

“Our role is to serve a healthy public conversation and our moves are reflective of things that we believe lead to a healthier public conversation. The kinds of things that we do about this is, focus less on thinking about free speech, but thinking about how the times have changed. One of the changes today that we see is speech is easy on the internet. Most people can speak. Where our role is particularly emphasized is who can be heard. The scarce commodity today is attention. There’s a lot of content out there. A lot of tweets out there, not all of it gets attention, some subset of it gets attention. And so increasingly our role is moving towards how we recommend content and that sort of, is, is, a struggle that we’re working through in terms of how we make sure these recommendation systems that we’re building, how we direct people’s attention is leading to a healthy public conversation that is most participatory.”

One of the old tweets from Twitter’s new CEO, Parag Agrawal, have also been trending on Twitter after his new role. In an October 2010 tweet, the new Twitter CEO wrote that “If they are not gonna make a distinction between muslims and extremists, then why should I distinguish between white people and racists.” The statement tweeted was apparently a direct quote from somebody else, as it is added under the quotes.

not sure anyone has heard but,

“I’ve decided to leave Twitter because I believe the company is ready to move on from its founders,” Dorsey said in an email statement. “My trust in Parag as Twitter’s CEO is deep. His work over the past 10 years has been transformational. I’m deeply grateful for his skill, heart, and soul. It’s his time to lead.”

Reactions on Twitter’s new CEO Parag Agrawal tweet: “..then why should I distinguish between white people and racists.”

A good time to remind you that critical race theory teaches explicitly that "all white people are racist" (Applebaum, 2010) and that "White identity is inherently racist" (DiAngelo, 2018). https://t.co/BxSoFofVek

completely aside from the point that the context of this quote is that it comes from a Daily Show segment, it seems pretty clear to me that Parag agrees with the notion that not all Muslims are extremists and that not all white people are racist. https://t.co/9B1XYIYo1t