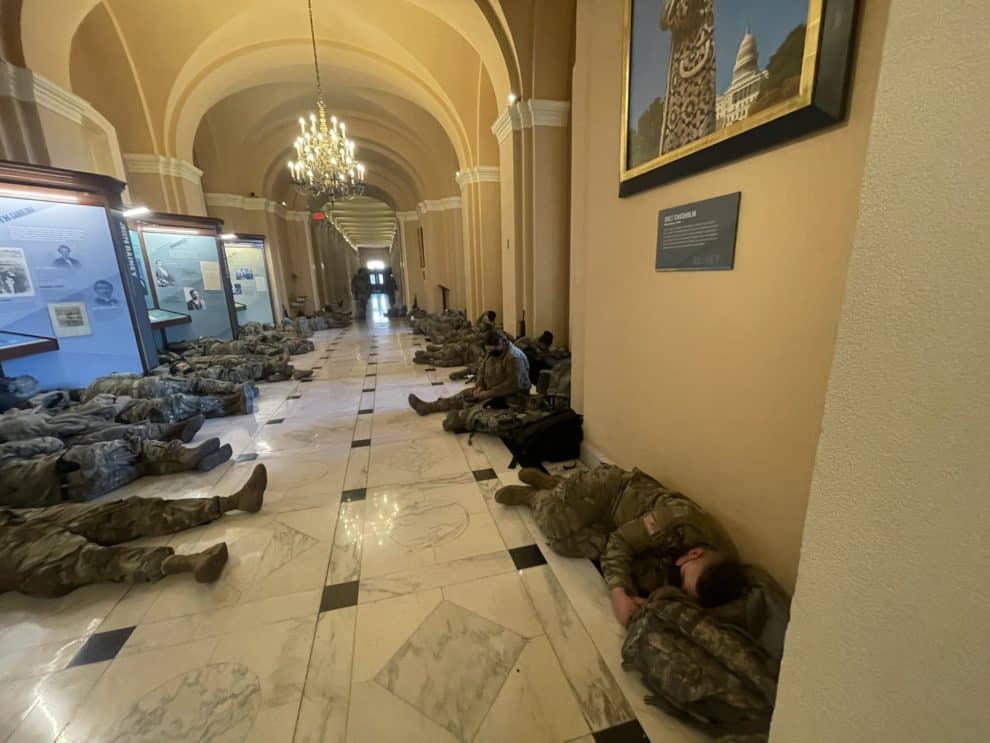 Videos and photos of National Guard members sleeping inside the US Capitol Building are going viral on social media.

When journalists from different media outlets and the U.S. House representatives reached the US Capitol in Washington DC today morning, they were surprised to witness that Hundreds of National Guard troops were sleeping in different areas of the US Capitol Building.

Photos and videos from inside the Capitol building showed some National Guards were spotted resting in hallways, while others were found sleeping at Visitor’s center.

The National Guard troops were deployed inside and around the Capitol ahead of the House’s vote today on impeaching President Donald Trump for a second time.

VIDEO of National Guard Sleeping at US Capitol Building

PHOTOS of National Guard Sleeping at US Capitol Building

One user wrote, “National Guard members are sleeping in the hallways of Congress, the veins of American DEMOCRACY, preparing themselves to defend the Capitol against the supporters of a sitting President. The very person responsible for upholding our FREEDOM. Let that sink in.”

Another said, “Reinforcements have arrived in the Capitol ahead of today’s impeachment vote and for inauguration week. All quiet for now.”

“Great that they are there, however, why did Washington DC not arrange to use empty hotels or at least setup tents on one of the spaces near the Capitol. What is wrong with America, not very Great anymore.” tweeted a user.

“Just saw the pics of all the sleeping national guard at the Capitol and I had the same creepy feeling I had when Holden looked around at his entirely Belter Crew in The Expanse.” tweeted another user.

One user said in a tweet, “The National Guard soldiers that are at the Capitol are getting shafted hard. They’re the new target. And has no one ever heard of a hotel room? Why were they sleeping on the floor? Failure in leadership.”

Another said, “These parts of the Capitol are typically filled with tourists and excited school groups hoping to catch a glimpse of democracy at work. Today, they’re filled with the National Guard to keep the Capitol safe from the President’s violent insurrectionists.”