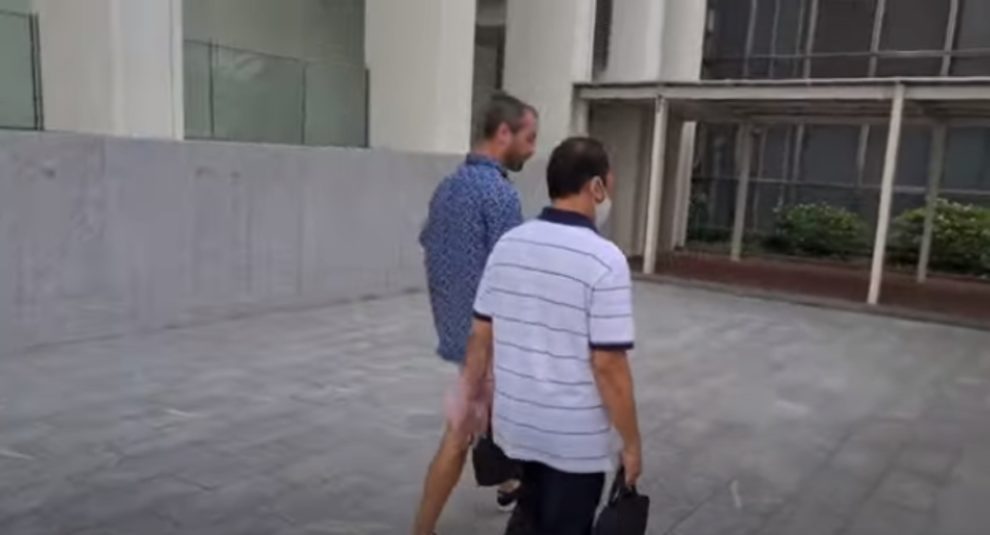 After being released from prison on Wednesday, British national Benjamin Glynn is preparing to be deported from Singapore.

After being convicted on the same day, the 40-year-old former recruitment consultant was sentenced to six weeks in prison.

District Judge Eddy Tham found him guilty of two counts of harassment and being a public nuisance under the Covid-19 (Temporary Measures) Act.

The sentence was retroactive to July 19, the date he was first remanded.

Glynn was imprisoned from July 19 to August 4. However, the court later ordered him to be remanded at the Institute of Mental Health for a psychiatric evaluation from August 5 to August 18.

Because his remand period amounted to more than two-thirds of his sentence, he was allowed to be released on remission almost immediately after he was sentenced.

After serving two-thirds of their sentence, convicts may be released on remission for good behaviour.

Foreigners who are convicted, on the other hand, usually have their work permits revoked and are deported after serving their sentence. Foreigners are also not permitted to stay in Singapore without a valid pass.

According to a Ministry of Manpower spokesman, Glynn’s former employer had already cancelled his work pass, and he is now permanently barred from working in Singapore.

Glynn was handed over to the Immigration and Checkpoints Authority (ICA) on Wednesday, according to a spokesman for the Singapore Prison Service, who will make arrangements for his deportation.

The ICA has been contacted for comment by The Straits Times.

Glynn made headlines on May 7 after a video of him refusing to wear a mask on a train surfaced online.

He can be heard saying in the video that he will never wear a mask.

Later, a police report was filed against him.

On May 9, just after midnight, police were attempting to arrest him at the ground floor lift lobby of his Holland Road condominium when he threatened to “drop” them.

During Wednesday’s trial, the court heard how Glynn took a boxing stance with both fists clenched when he made the verbal threat.

He attempted to flee but was apprehended after tripping.

Glynn was charged for the first time on July 2 and was granted bail.

On the same day, however, he was seen without a mask at the State Courts building.

On July 19, he was hauled back to court and charged with the incident. His bail was also revoked, and he was remanded.

Glynn claimed to be a sovereign in subsequent court hearings leading up to Wednesday, claiming he had no contract with the Singapore Government or the authorities.

Judge Tham stated on Wednesday that Glynn acted with “blatant disregard for the law” and was “completely misguided.”

An offender can be imprisoned for up to six months and fined up to $10,000 for each charge under the Covid-19 (Temporary Measures) Act.

If convicted of harassment, an offender faces up to a year in prison and a $5,000 fine.