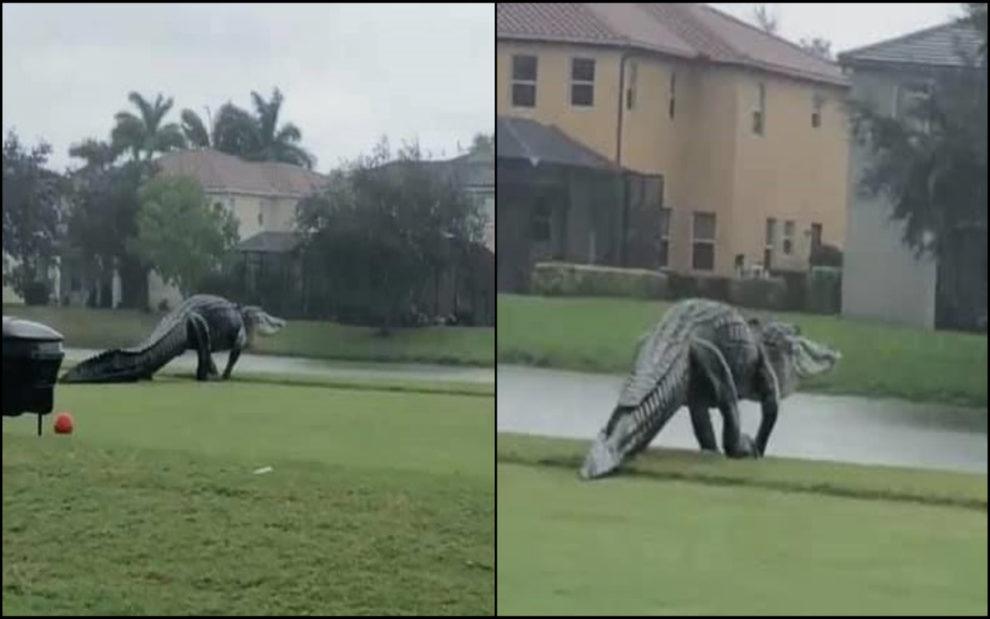 Reports from Florida state that a huge alligator has been spotted in Naples during Hurricane Eta. Photos of the gator are circulating online, the pictures show an extremely large grey scaly creature roaming around in the park. It almost seems unreal, the pictures are taken at such an angle that the alligator appears to be a small-sized alligator. Needless to say, the sight could make a sumo wrestler scream.

The pictures were first posted by Jeff Jones of WINK News, the pictures show the alligator moving in a residential area without a hint of care. However, it seems like the images of the gator were captured from the video, embedded below. Imagine walking to the park one day and being greeted by this creature. Alligators are especially dangerous because they belong to a crocodilian family. There are several different species of alligators and all are equally scary. The word alligator can literally mean “the lizard” in Spanish. Ironically, alligators were named by Spanish settlers and explorers when they settled in Florida and became acquainted with these creatures.

Alligators are only native to the United States, Mexico, and China. Maybe this alligator wandering around in Naples, Florida is lost? Perhaps the most disturbing aspect of alligators is how they move, they usually sprawl on the ground like lizards or they perform the high walk in a manner similar to dinosaurs.

Alligators have also been known to attack humans and prey on them. A user tweeted a helpful survival tip, “Free Florida survival tip: if you’re ever chased by a gator, run zig zag. Heavy tails slow them down, otherwise, they’re running a 6-minute mile.”

Video of the Gator (Alligator) in Naples, Florida

Photos of a gator – see you later, alligator?

However, some users also pointed out that what appears to be an alligator in the pictures might not actually be one. One user tweeted, “That looks like a crocodile, not an alligator. Crocs can get much bigger than gators and have a pointy snout. Gators have a rounded snout. The Florida Everglades is the only habitat in the world where you can find both crocs and gators.” Another said, “Listen. When I walk I have eyes on my phone all the time and I’m fairly certain that if I lived in Florida I would be destined to trip over an alligator and die.”

This huge creature has landed in Naples courtesy of Hurricane Eta. Hurricane Eta made landfall in Florida near Cedar Key at around 4:20 a.am, it struck the area with strong winds. A weather agency reported, Tropical-storm-force winds still expected this evening along the Florida Gulf Coast. Heavy rainfall will continue to spread across west & central Florida. Additional flash & urban flooding possible in south Florida too.

People in Florida should exercise caution and stay mindful of any creatures running around in residential areas.