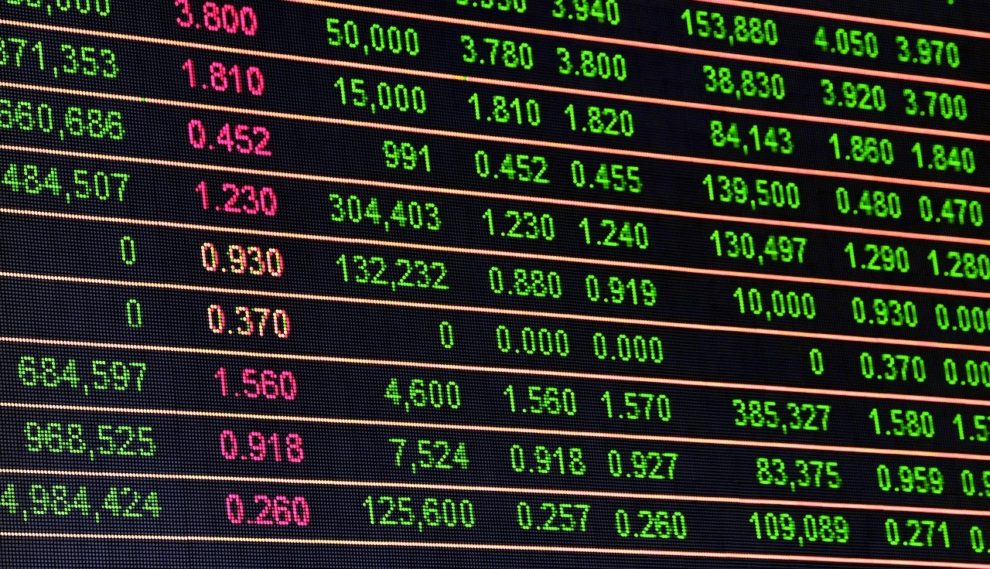 “Members of Congress should be focused on their constituents—not advancing their own stock portfolios,” said Democratic Rep. Mark Pocan.

As the coronavirus pandemic continued to roil the U.S. economy and take lives in 2021, congressional lawmakers and their family members went on a stock buying and selling spree, trading an estimated $355 million worth of shares in Facebook, Apple, and other prominent corporations.

According to a new analysis of financial disclosures by Capitol Trades and reporting from MarketWatch, at least 113 members of Congress have divulged stock transactions completed by themselves or members of their families in 2021.

“It chips away at that public confidence in their government.”

By total dollar amount, Rep. Michael McCaul (R-Texas) was the biggest stock trader in Congress in 2021, disclosing roughly $31.4 million worth of stock purchases and $35.2 million in sales.

Following McCaul was Rep. Ro Khanna (D-Calif.), who disclosed $33.6 in stock buys and $19.1 million in sales. A spokesperson for the California Democrat told MarketWatch that Khanna “does not own any individual stocks and complies fully with the Ban Conflicted Trading Act,” 2021 legislation that would bar members of Congress from buying or selling individual shares of companies.

Kedric Payne, senior director of ethics and general counsel at the Campaign Legal Center, said in response to the MarketWatch reporting that “when the public sees a large volume of trades by members of Congress, it just raises the question of why that is occurring, and if it is without conflicts of interest.”

“It chips away at that public confidence in their government,” Payne added.

The following is a list of some of Congress’ leading stock traders in 2021, courtesy of MarketWatch: 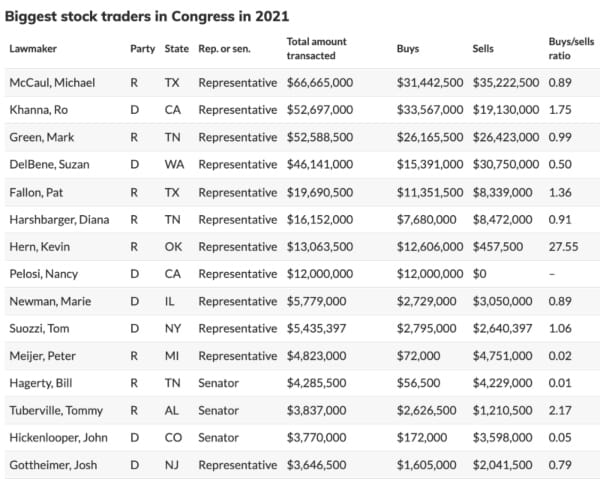 While 2021 was a tremendously difficult year for low-wage workers and average families as Covid-19 continued to spread, it was a banner year for the U.S. stock market, which roared back from its March 2020 lows after the Federal Reserve slashed interest rates to zero and launched a massive asset-purchasing program to rescue the ailing financial system.

Last month, Sen. Jon Ossoff (D-Ga.)—who called out Perdue’s trades on the campaign trail and ultimately defeated the Republican incumbent in Georgia’s 2021 runoff election—introduced legislation that would prohibit stock trading by members of Congress and their immediate family.

The legislation currently has just six co-sponsors in the Senate.

Last week, 27 House lawmakers urged Speaker Nancy Pelosi (D-Calif.)—whose husband is a prolific trader—to hold a vote on legislation that would bar members from trading stock. After previously defending current rules that allow lawmakers to buy and sell individual stocks, Pelosi said last month that she would be open to advancing legislation banning the practice if it has the support of the Democratic caucus.

“Members of Congress should be focused on their constituents—not advancing their own stock portfolios,” he tweeted last week.