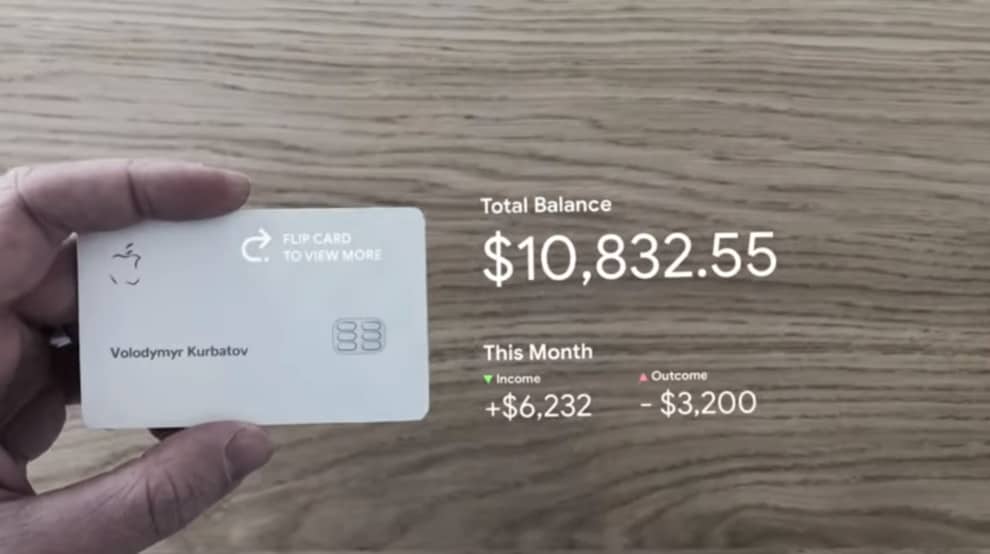 The Apple Card has been around for months. The sleek titanium card makes it easy for you to not only make payments but also track all your expenses. You can pair it with the Wallet app on your iPhone to send and receive money. Since the Cupertino company is investing heavily in augmented reality, it’s only a matter of time before it adds some AR magic to its credit card. A concept creator has shared an exciting Apple Card concept flaunting the AR technology.

The potential of augmented reality

Apple has added AR capabilities to its smartphone cameras, games, and other apps. Concept creator Volodymyr Kurbatov has shared a video (via Cultofac) showing how augmented reality could enhance the experience for Apple Card users.

When you view the Apple Card using an AR headset or AR app, it displays a handy list of your total balance, expenses, etc. You don’t have to launch the Wallet app on your iPhone to view these details. Kurbatov said there are many demo videos showing some information on a card. This concept takes it to a whole new level.

You can flip over the card to view recent transactions. What’s more, users can swipe their finger on the card to change what’s displayed in augmented reality. This is just a cool concept, though. There is no confirmation whether or when Apple would bring such a feature. The video doesn’t delve into privacy and security aspects.

Will there be an Apple Card with AR capabilities?

Earlier this year, Apple introduced a LiDAR scanner with the 2020 iPad Pro. It significantly enhances the augmented reality experience by allowing apps to perform fast and accurate depth mapping. The upcoming iPhone 12 series is also said to feature the LiDAR scanner. So, the possibility of an Apple Card with AR capabilities imagined in Kurbatov’s concept can’t be ruled out.

That’s not all. Apple is long rumored to be working on AR glasses, which could debut in a couple of years. Augmented reality superimposes digital information or images on the real world scenes.

The Apple Card has a minimalist design with your name engraved on it. The card number is saved virtually in the Wallet app. The iPhone maker launched it in partnership with Goldman Sachs last year. Apple doesn’t charge an annual fee. The card offers a bunch of benefits including rewards, cash backs, and the ability to track your spending. However, it works only with Apple devices.