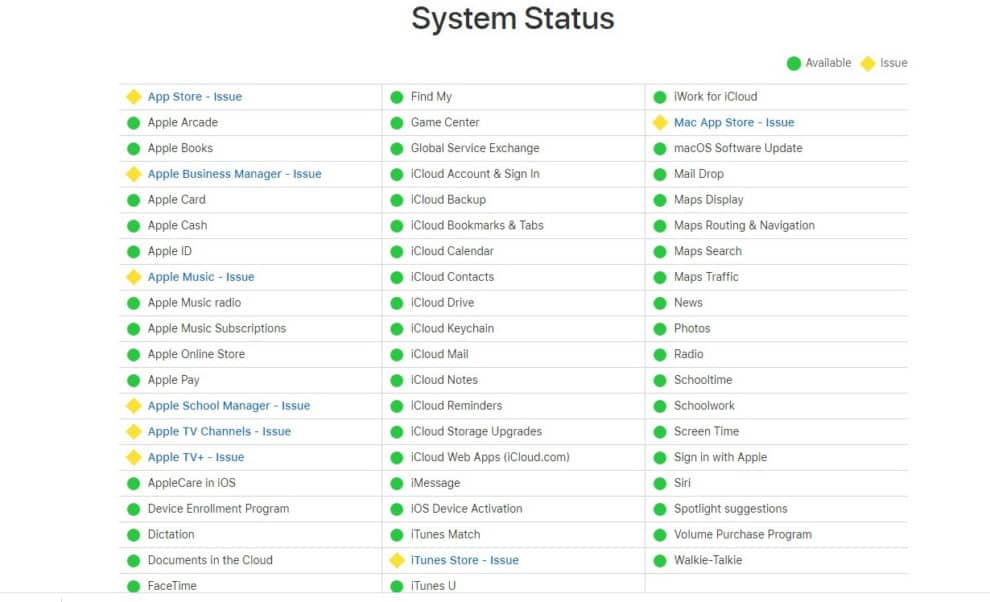 Multiple Apple services goes down on Tuesday morning. Officials at Apple have confirmed that users may be experiencing problems with Apple services. These issues might be affecting App Store, Apple Music, Apple Tv+ and iTunes Store. The outage is also affecting Apple Music users on multiple devices including the iPhone, iPad and Mac.

Apple faces outage on most services

The official status page of Apple shows that a number of users around the globe are experiencing these issues. The services that are down include App Store, Apple Music, Apple TV Channels, Apple TV+, iTunes Store, Mac App Store, Apple Business Manager, and Apple School Manager. The reasons for this massive outage are still unknown. These issues seem to be affecting more services than usual when Apple servers are down. In the past, there have been issues on and off with iCloud but this morning has witnessed Apple having trouble on a massive scale.

Apple is currently working to resolve these issues. The officials at Apple have released the following statement, “Users are experiencing a problem with this service. We are investigating this issue.” Downdetector, a service illustrating realtime overview of issues and outages with all kinds of services, shows a massive hike in reported issues with Apple services. Several users have complained of Apple Music being down in the past hour, particularly in the US area.

Apple officials are working on resolving the issue

Apple has maintained that this outage seemed to be intermittent, the issues are not being faced by all Apple users. The disruption is only being faced by a handful of users around the globe. Several Apple users have resorted to social media to express their frustration with Apple servers. One user tweeted, “Not impressed. For the first time in a long time. @Apple servers are down. From tv to music.. @tim_cook must get this fixed. Fast.” While another user tweeted about her unpleasant day, “*finally works up energy to go running* *apple music immediately shuts down and rejects my card and now I have no music*”.

In other news, Apple is all set to launch its first exclusive online store in India on September 23, just ahead of the festive season. The first ever exclusive store will be offering a full range of products, support and premium experience to consumers across the country. Moreover, the September 15 Apple event was a huge success. Some major announcements were made at the event. Apple also launched new software updates on September 16  including iOS 14, iPadOS 14, watchOS 7, and tvOS 14.