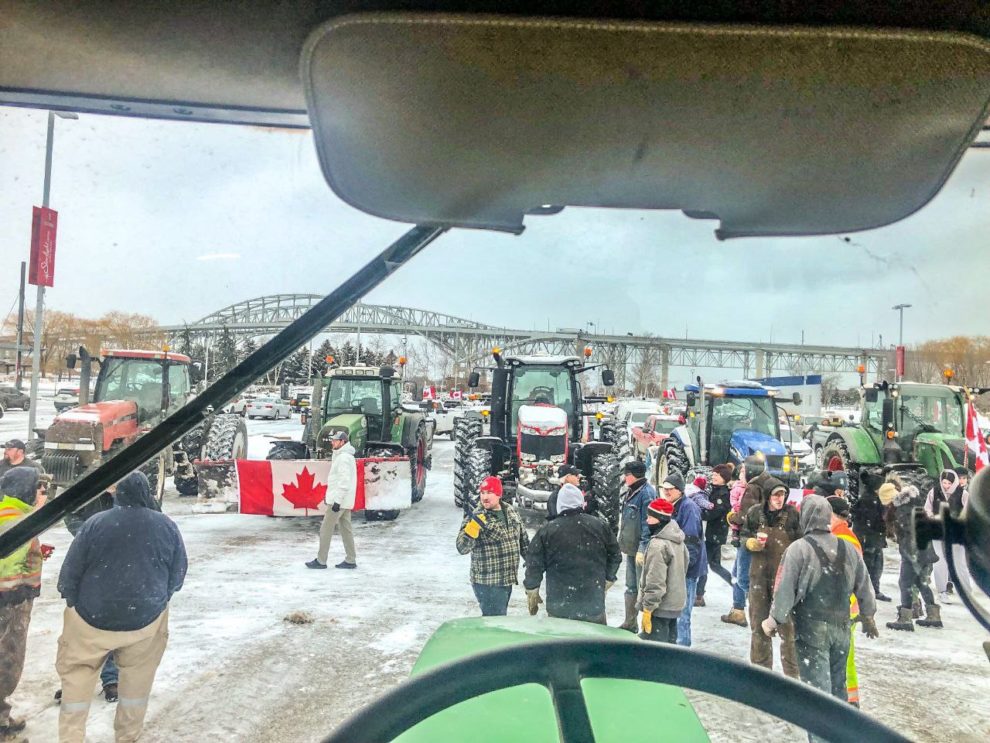 More demonstrators poured onto the streets of Ottawa and other Canadian cities on Saturday demanding an end to Covid vaccine mandates, as protests against pandemic restrictions entered their second week.

In the capital, demonstrators huddled around campfires in bone-chilling temperatures and erected portable saunas and bouncy castles for kids outside Parliament, while waving Canadian flags and shouting anti-government slogans.

Their chants of “freedom” were met with cries of “go home” by a smaller group of counter-protestors fed up with the week-long occupation of the capital.

The atmosphere, however, appeared more festive — with dancing and fireworks — than a week earlier, when several protesters waved Confederate flags and Nazi symbols and clashed with locals.

The demonstrations, which started out as protests by truckers angry with vaccine requirements when crossing the US-Canadian border, have morphed into broader protests against Covid health restrictions.

Police were out in force and put up barriers to limit vehicle access to the city center, as many thousands of protestors — including two on horseback — joined truckers already jamming Ottawa streets.

Similar protests were happening in almost every major Canadian city, including Toronto — where a man was charged with assault after throwing a smoke bomb into a crowd.

In Winnipeg, a driver was arrested for slamming his SUV into demonstrators. Four people were treated for minor injuries, police said.

And in southern Alberta province, truckers continued to block a major border crossing to the US state of Montana.

At an emergency meeting late Saturday, Ottawa police chief Peter Sloly requested “an additional surge of resources” to bring an end to what police board chair Diane Deans described as a “siege” of the capital.

“This group is a threat to our democracy,” Deans said. “What we’re seeing is bigger than just a city of Ottawa problem, this is a nationwide insurrection. This is madness.”

With public anger rising — thousands of residents have complained of harassment by protesters, and an online petition demanding action has drawn 40,000 signatures — Sloly has faced increased pressure to end what he has called an “unlawful” occupation of the city.

Reached for comment by AFP, protest coordinator Jim Torma said the protesters would not back down.

“They’re not going to hide us,” Torma said. “We’re going to be in (politicians’) faces as long as it takes” to force an end to public health restrictions aimed at slowing the spread of Covid-19.

Kimberly Ball, who with her husband drove five hours from a small town west of Toronto to join the Ottawa protest, told AFP, “It’s about our freedom.”

Holding back tears, she said, “A couple of people we know, friends, lost their jobs because of these (vaccine) mandates” and her own parents have disowned her for not getting a jab.

Ball has had Covid and said she questions whether the vaccines are safe and effective.

She is, however, in the minority in Canada, where 90 percent of adults are fully vaccinated.

The Freedom Convoy started on Canada’s Pacific coast in late January and picked up supporters along the long trek to the capital — as well as millions of dollars in an online fundraiser that GoFundMe cancelled late Friday after receiving reports of “violence and unlawful activity.”

The number of protesters in Ottawa had peaked last Saturday at several thousand before dwindling to a few hundred by midweek, officials said.

Trudeau has said the protesters represent only a “fringe minority,” though polls show one-third of Canadians support the call to lift all Covid restrictions.

Vaccine mandates for travelers are set by the federal government, but most other Covid measures are the responsibility of provincial authorities in Canada.

Following a backlash, Quebec last month walked back plans for a health tax on unvaccinated residents, while Saskatchewan this week announced an imminent lifting of all pandemic restrictions, despite pushback from doctors.

Ottawa residents, meanwhile, have had enough of the chaos the protests have brought to their streets and launched a class action seeking almost 10 million Canadian dollars (US$8 million) from organizers.

“The truckers have been terrorizing us for seven, eight days now,” university student Saffron Binder told AFP. “The occupation must end.”