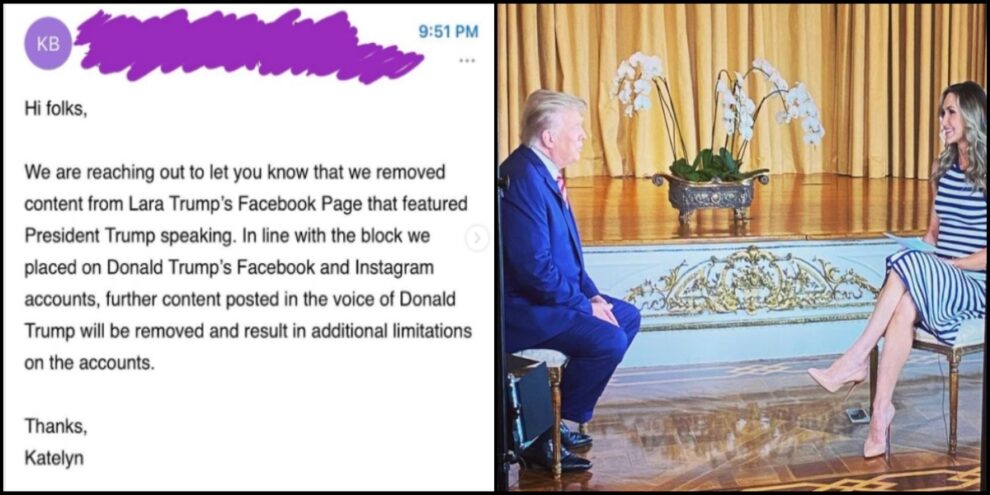 Facebook removed an interview from Lara Trump’s Facebook page on Tuesday that was organized by The Right View, Fox News reported.

The guest for the interview was former President Trump whose daughter-in-law Lara Trump hosted the interview. Lara had posted a video message on her Twitter account asking viewers to join the interview.

“Join me on The Right View tonight — we’ve got a HUGE guest — President Donald Trump!!! Go to http://TheRightView.com at 8pm to watch!”

However, Facebook censored the interview and shared a statement:

“We removed content from Lara Trump’s Facebook page that featured President Trump speaking. In line with the block we placed on Donald Trump’s Facebook and Instagram accounts, further content posted in the voice of Donald Trump will be removed and result in additional limitations on the accounts.”

In another message, Facebook said that President Trump’s interview was currently not allowed on Facebook and Instagram. According to the company, the guidance is applicable to all campaign accounts and pages. It also includes Team Trump, other campaign vehicles, and former surrogates.

As Facebook explained the reason for censoring the interview, Lara was appalled and took to Instagram. She wrote that we are close to Orwell’s 1984.

A slap in the face

Eric Trump, Lara’s husband and son of the former President, also expressed his concern Tuesday night and called it a “slap in the face.”

Facebook had blocked Trump from its network for an indefinite period following the Jan.6 U.S. Capitol riot. The company’s CEO Mark Zuckerberg said they believed the risks of letting the President continue using their service was too high.

Other platforms , Instagram, Twitter, Snapchat and YouTube had also put a permanent ban on Trump after the riot. However, Trump senior adviser Jason Miller had said earlier this month that Trump would be back. According to him President Trump would come back again with his own social media platform in probably two or three months.

“This new platform is going to be big,” said Miller. He also predicted that Trump will attract tens of millions of people.