By using the print command, users of Google Chrome can print directly from the browser on their computer or mobile device.

A part of the user’s document or webpage that they would like to print is displayed in a new browser tab that is opened by an HTML print preview. But it appears to be having some problems. 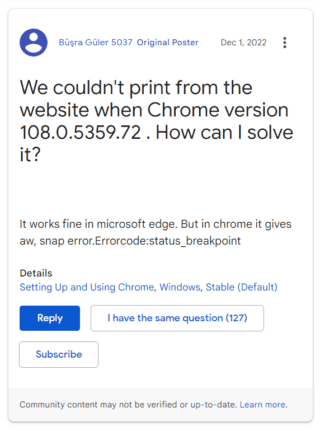 The affected users claim that it either prints distorted chunks of the outputs of whatever they want to print or produces hundreds of blank pages.

Every page is shown and printed with a small amount of excess content, which alters the layout from what the user intended.

The latest v108 Google Chrome update has brought along the issue, despite it working flawlessly in earlier versions of the browser.

A user posted: “Recently Chrome updated to the latest version 108.0.5359.95 which impacted on JavaScript window.print() function. In print review or after print found my table jumping on new pages.”

Issue not acknowledged yet + potential workaround

Although the developers have not yet acknowledged this issue, it has been opened in the Chromium issue tracker and there are potential active developments.

There is a potential workaround that involves changing the CSS property’s “position: absolute” to “fixed” or “relative.” The code requires changing in 2 places.

Another solution is to downgrade to v107 or an older version, which does not appear to be impacted by this issue. Affected users will have to wait for an official fix or try the above mentioned workarounds.