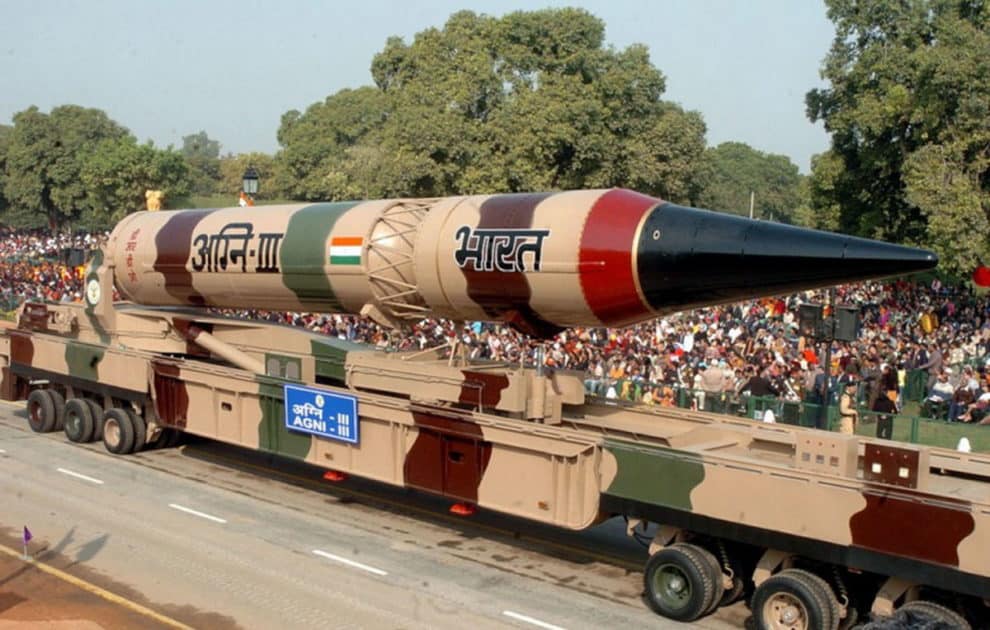 As the world seeks to shrink global stockpiles of nuclear weapons, India continues to modernize its arsenal (advancing nuclear program), which increases Pakistan’s security dilemmas, compelling it to adopt an appropriate and restrained response.

New Delhi has been described in a variety of ways ranging from emerging power, global power, great power, would-be great power, major power, and regional power. However, this self-perception of India, by expanding and modernizing its nuclear weapons, has made the region more volatile. These desires of New Delhi have made South Asia more prone to a nuclear arms race. Climbing up this ladder of chaos, the only priority of New Delhi’s government is for India to be seen as a consensual leader in the region. Such moves by India to achieve its national goal of being a regional and international power, altogether, altered the security dynamics of South Asia. As the world seeks to shrink global stockpiles of nuclear weapons, India continues to modernize its arsenal, which increases Pakistan’s security dilemmas, compelling it to adopt an appropriate and restrained response.

The latest yearbook by the Stockholm International Peace Research Institute (SIPRI) mentions, as of June 2020, that India is estimated to have a growing arsenal of approximately 150 nuclear weapons and Pakistan is estimated to have an arsenal of 160 nuclear weapons. The Western as well as Indian media immediately picked up the estimates of Pakistan’s nuclear weapons and reported it as the fastest-growing. However, realities on the ground are quite the opposite. Among the Non-NPT states, India, not Pakistan, has the world’s fastest-growing nuclear arsenal.

A study titled “Indian Unsafeguarded Nuclear Program: An Assessment”, published by the Institute of Strategic Studies Islamabad (ISSI), gives India conservative and optimal capacity to produce nuclear weapons from both its estimated unsafeguarded reactor-grade plutonium (RG Pu) and weapon-grade plutonium (WG Pu) stocks. The conservative estimates in the book suggest that India can produce at least 356 nuclear weapons. On the other hand, apart from attaining its fuel needs of its 500 MW Fast Breeder Reactor, India can still produce an optimal number of at least 493 nuclear weapons. By 2039, India will have six Fast Breeder Reactors (FBR). The aforementioned study estimates that each of the 500MW FBR, once operational, will assist in making 28 nuclear weapons per year. As these estimates were drawn in 2016, it is understandable that this capacity has increased due to India’s nuclear weapons modernization in the light of the acquisition of a functional nuclear triad.

Another study titled “India’s Nuclear Exceptionalism Fissile Materials, Fuel Cycles, and Safeguards”, published by the Belfer Center for Science and International Affairs at the Harvard Kennedy School, states that according to Indian fissile material weapon equivalent potential, India can produce 2261 to 2686 nuclear weapons. The author breaks it down with 148—198 weapons from WG Pu, 688 from separated RG Pu, 1375—1759 unseparated RG Pu and finally, 50 nuclear weapons from High Enriched Uranium (HEU).

According to a report, India is also building its largest secret nuclear city in Chakkakere. This report mentions that this nuclear city will provide India with extra enriched uranium fuel to be used for thermonuclear weapons. Serena Kelleher-Vergantini from the Institute for Science and International Security argued that, in this nuclear city, India could keep up to 1050 enrichment machines in Separative Work Units (SWUs) coupled with 700 older centrifuges. With this, Indian officials could complete 42,000 SWUs per year. These would be enough to produce approx. 403 pounds of WG uranium per year. Even after providing 143 pounds for INS Arihant, India will have the capacity to fuel 22 thermonuclear weapons. However, Independent analysts estimated that India has a total enrichment capacity of 42,300 SWU/yr from RMP and BARC facilities. Furthermore, India only requires 5,835 SWUs to 10,375 SWUS for 4-5 of its planned nuclear submarines which is just 24% of total capacity. The remaining 31925 SWUs (75%) will be enough to produce nuclear weapons. The new nuclear city enrichment facility once fully operational will cross the Indian capacity of enriching the uranium to 100,000 SWU/yr. Hence, these facilities will provide India with nuclear weapons consisting of a larger yield. This is the major rationale due to which India has kept most of its facilities, including this nuclear city, out of IAEA safeguards.

Indian ambitions are apparent from a statement published in The Hindu on 31 October 2013 by Indian Atomic Energy Chairman R.K. Sinha, who said that “India will continue its nuclear program without any interruption, irrespective of decisions taken by other countries” and there is no reason to follow Germany or Japan which are cutting down on nuclear energy.

Over the past decade, as elaborated above, an Aesopian nuclear struggle to achieve the maximum is underway by India. South Asia has been alarmed by India’s increase in nuclear weapons and its ability to wage conventional war. India’s massive military expenditure has taken an asymmetric approach in building up its nuclear arsenal. Additionally, India’s multiple nuclear deals with Nuclear Suppliers Group (NSG) member states, resulting in an increase in its fissile material stockpiles, have the potential to increase tensions in the region.

While delivering the Fullerton lecture in 2015 at the International Institute for Strategic Studies on “India, the United States and China”, Indian Foreign Secretary S Jaishankar said, “India looks to transforming itself from a balancing power to a leading power” ( Jaishankar 2015). After keeping a low profile in the international system for long, India now wants to pro-actively shape global outcomes as there are now growing demands on India to make more contributions to the maintenance of the global order. To shape this order, India is rapidly expanding its nuclear weapons at a faster pace.

India’s existing and future nuclear capability fuels regional (in)security. The civilian nuclear power program of New Delhi is undergoing a significant expansion, thanks in part to the civil nuclear agreement that the U.S reached with India in 2004. Such exceptionalism to New Delhi helped it to sign 13-plus nuclear cooperation agreements with other states over the past decade. Under these deals, India imported around 20000 metric tons of uranium. It is important to note here that every ton of imported uranium liberates every ton of Indian indigenous uranium to be used for weapon purposes. This expansion is creating new pathways for India to acquire fissile material at a faster pace for its weapons.

The signing of the civil nuclear agreement between India and the US and the 2008 exceptional NSG waiver has facilitated India’s efforts to stockpile more fissile material that can be utilized for weapons production. This commercial deal has made it easier for nuclear technology to spread in South Asia, because, as of today, India has the largest unsafeguarded civil and military nuclear programs at both the regional and global levels. The ensuing support helped India to not only acquire nuclear weapons but also maintain and increase its nuclear weapon stockpile to disturb regional stability. It is because of this exceptional treatment that India has refused to sign the CTBT, the FMCT, and also does not abide by the guidelines of the NPT. Along with this, India is developing a triad that includes nuclear-powered ballistic missile submarines, ICBMs, SLBMs, dual-use cruise, and ballistic missiles, and a very large naval expansion designed to project power beyond the region. India is also opting for the MIRVing as well as canisterization of its missiles. Moreover, many official quarters in India also indicate that India is moving away from its No First Use Policy (NFU).

This oscillatory approach of India guarding its vested nuclear interests is something that the international community must be wary of. Shaking hands with India through nuclear diplomacy and intentionally looking away from everything India has done to protect its obsessive nuclear secrecy shows the state-centric interests of Western powers overruling the rule-based global nuclear order. Such international reports create misperceptions regarding Pakistan’s nuclear weapons program as the fastest, while India has already grown its nuclear weapons capability as SIPRI estimates that India has HEU (4.4 tons) and Pu (6.5 tons—if, 0.4 tons is not included as it is under safeguards), enough for an average of 1876 nuclear weapons which is approx. six times more than Pakistan’s capability. Changing the eyes on this fact cannot change ground realities. Nevertheless, Pakistan is a responsible nuclear weapon state which will guard its security interests by giving a restrained and rational response to the full spectrum of threats emerging from neighboring India.