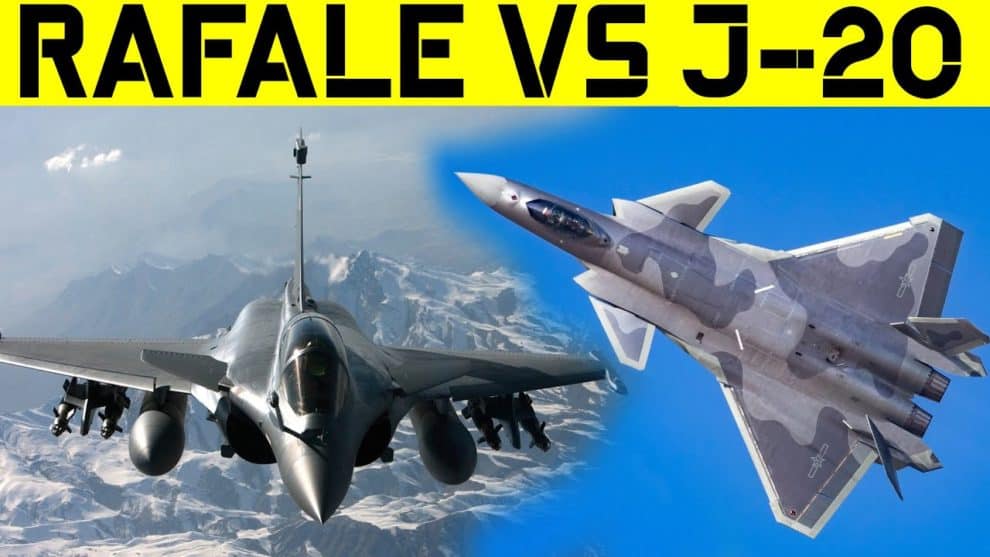 The first set of five Rafale jets are set to reach India on July 29th. They will be inducted into the 17th squadron at the Ambala air force base. Due to the ongoing border tensions with China, the Rafale jet has drawn instant comparisons with the People’s Liberation Army Air Force (PLAAF)’s most advanced J-20 fighter plane. In this Indian Rafale vs Chinese J-20 comparison, let’s check out how they stack up.

India inked a deal with France in 2016 to buy 36 Dassault Rafale fighter jets for INR 59,000 crore. It’s jam-packed with advanced technologies, and it will be one of the most powerful fighter jets in the Indian Air Force’s arsenal. The Chinese plane has never been used in a combat, so its capabilities aren’t proven yet. In contrast, the Dassault Rafale has proved its mettle in a number of battles including in Iraq, Syria, Afghanistan, Libya, and Mali. Here is how it compares to the Chinese Chengdu J-20.

China claims the J-20 is a 5th-gen aircraft with stealth capability that makes it invisible to the radar. But India’s Sukhoi-30MKIs have been able to pick up the J-20 on their radar multiple times. Even the US F-22 Raptor stealth jet doesn’t have stealth capability. The Rafale doesn’t boast a stealth technology.

Both fighter jets use the same Active Electronically Scanned Array (AESA) radars to detect the enemy aircraft and other targets. AESA is among the world’s most advanced radar technologies. The passive electro-optical detection system gives the J-20 pilots a 360-degree coverage.

The Rafale jet is further equipped with an electronic warfare suite called SPECTRA. It protects the fighter jet from airborne and ground threats by using different methods of decoying, detection, and jamming. It makes it extremely difficult for the enemy jets to detect and target the Rafale. The SPECTRA suite alone accounts for nearly 30% of Rafale’s cost.

Both of them are highly advanced air superiority fighter jets equipped with advanced weapons. They are both capable of air-to-air combat, nuclear deterrence missions, and air-to-ground combat.

The Indian Rafale is equipped with the Meteor and SCALP weapons. The Meteor is a Beyond Visual Range (BVR) missile with 150km range. The SCALP is a ground attack missile with a range of 200km. The Indian Air Force is also adding the HAMMER missile to its Rafale jets.

The Chinese J-20 has the PL-15 air-to-air missile. It is considered the most potent air-to-air missile in the Chinese air force’s inventory. It has a range of 200km. One major difference between the PL-15 and Meteor missiles is that the Chinese missile primarily targets large aircraft such as mid-air refuelers. The Meteor can destroy even smaller objects such as drones and other missiles.