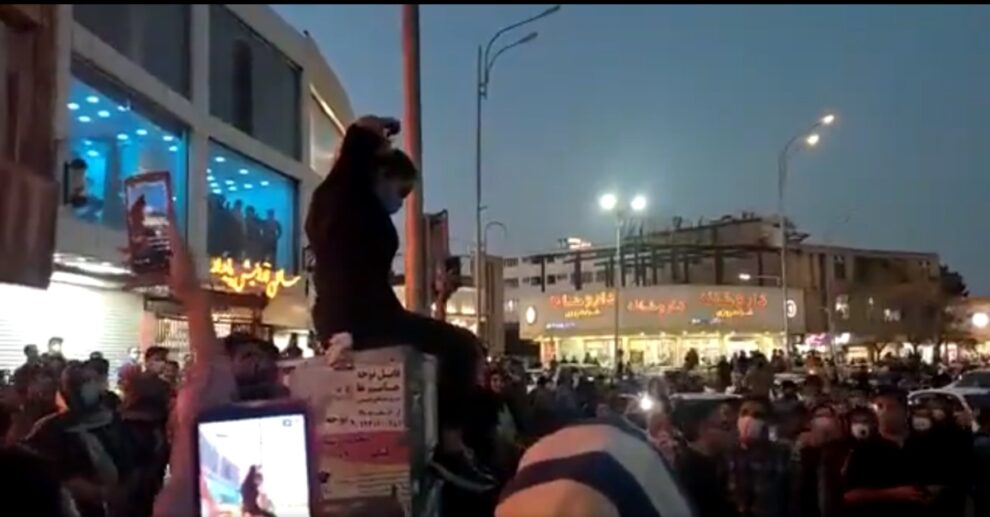 Iran said Friday that nine foreigners were arrested over deadly street protests sparked by the death of Kurdish woman Mahsa Amini, as demonstrations across the country entered a third week amid gunfire.

Dozens have been killed in a crackdown on the protests that erupted when Amini, 22, died in custody three days after her arrest by the notorious morality police in Tehran for allegedly breaching the Islamic republic’s strict dress code for women.

“Death to the dictator,” bare-headed women chanted in the northwestern city of Ardabil, said Iran International, a Persian-language television station based in London.

Iran’s intelligence ministry said “nine foreign nationals from Germany, Poland, Italy, France, the Netherlands, Sweden, etc. were arrested at or behind the scene of riots”, along with 256 members of outlawed opposition groups.

In the southwestern city of Ahvaz, security forces fired tear gas to disperse scores of people who streamed onto the streets jeering and shouting anti-government slogans, in another video shared by the channel.

In Zahedan, near Iran’s southeastern border with Pakistan, men braved gunfire as they stoned a police station, other footage shared by the channel showed.

Stretcher parties were seen carrying away men bloodied by apparent bullet wounds in the footage, which AFP was unable to immediately verify.

State media said police in Zahedan had returned fire when they came under attack by gunmen, while Ahmad Taheri, the Sistan-Baluchestan provincial police chief, said three police stations were attacked.

“A number of police members as well as passers-by have been injured in the exchange of fire,” the state broadcaster said.

Women have defiantly burned their headscarves and cut their hair in the protests over Amini’s death, announced September 16, that are the biggest seen in Iran since demonstrations in November 2019 over fuel price rises.

A leading Iranian human rights lawyer, Nasrin Sotoudeh, told US news magazine Time that she expected the protests to go on regardless of the intensity of the authorities’ crackdown.

“What the people want is regime change, and no return to the past,” said Sotoudeh, who is on medical furlough from a 38-year jail sentence for her advocacy work.

“And what we can see from the current protests and strikes that are now being initiated is a very real possibility of regime change.”

Amnesty International said Iran was intentionally using lethal force against the protesters, adding that without international action “beyond statements of condemnation” more people risk being killed.

Amnesty said it had obtained a leaked official document issued to the commanders of armed forces in all provinces on September 21 instructing them to “severely confront” protesters.

Another leaked document showed that on September 23, the commander of the armed forces in Mazandaran province, where some of the deadliest clashes have taken place, ordered security forces to “confront mercilessly, going as far as causing deaths, any unrest by rioters and anti-revolutionaries”.

The NGO said it had confirmed 52 deaths in the protests but the toll was likely higher.

Another rights group, Oslo-based Iran Human Rights, said 83 people were confirmed to have been killed, while Iran’s Fars news agency has put the death toll at “around 60”.

Amnesty’s warning comes as Iran presses ahead with an intensifying crackdown that has seen the arrest of many journalists, activists and other prominent figures.

Iranian football fans, meanwhile, asked FIFA to ban their national team from this year’s World Cup in Qatar over the crackdown.

Security forces also arrested singer Shervin Hajipour, whose song “Baraye” (“For”) made up of tweets about the protests went viral on Instagram, the rights group Article 19 said.

Demonstrations of solidarity with Iranian women have been held worldwide, and rallies are planned in 77 cities on Saturday.

Iran has blamed outside forces for the protests, and on Wednesday it launched cross-border missile and drone strikes that killed 14 people in northern Iraq’s Kurdistan region, accusing rebel groups based there of fuelling the unrest.

Iran’s Revolutionary Guards pledged to carry out more attacks until the groups are disarmed.

The United States said one of its citizens had been killed in the Iranian strikes.