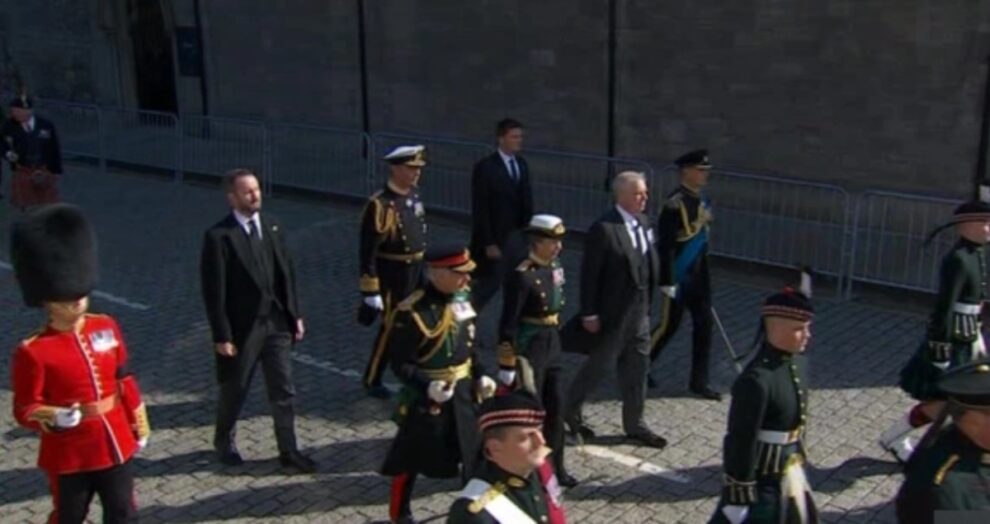 The queen’s oak coffin had on Sunday been driven to the Scottish capital from the Balmoral estate where she died last week aged 96, and held overnight at the royal residence of the Palace of Holyroodhouse.

After a regimental band played “God Save The King”, her four children — Charles, Princess Anne, Princes Edward and Andrew — stepped out behind the hearse flanked by kilted soldiers.

Thousands of people lined the route to watch as the procession made its way to the 12th-century St Giles’ Cathedral as cannon fired at one-minute intervals from Edinburgh Castle.

The royals were joined by Prime Minister Liz Truss and Scottish First Minister Nicola Sturgeon for a service of prayer and reflection for the monarch who reigned for a record-breaking 70 years.

Later, the king and senior royals will stand vigil at the cathedral, with the coffin draped in the Royal Standard of Scotland and topped with a wreath including heather from Balmoral, and the ancient Crown of Scotland.

The public will also be able to pay their respects to the monarch known as “Queen of Scots” until the coffin is flown to London on Tuesday ahead of the state funeral at Westminster Abbey on September 19.

Prince Andrew was not wearing his military uniform, unlike his siblings, after stepping back from public life following a scandal over his links to US sex offender Jeffrey Epstein.

But his presence represented a show of unity, as did the joint appearance at the weekend by Charles’ warring sons William and Harry, as they surveyed flowers and cards left outside Windsor Castle.

Harry, the youngest, who renounced royal duties in 2020 and moved to the United States, had earlier paid tribute to his grandmother, calling her his “guiding compass”.

“You are already sorely missed,” the 37-year-old said in his first statement since her death on Thursday, adding that he and his American wife Meghan “now honour my father in his new role”.

The huge numbers who have turned out for the queen in Edinburgh are a taster of the crowds expected in London when the late monarch lies in state for four days at Westminster Hall from Wednesday.

Around 750,000 people are expected, while the first person arrived for the queue on Monday — more than 48 hours before the line opens.

“I just felt I had to do something. I just wanted to come today,” said Steve Crofts, 47, waiting for the royals outside St Giles’.

Many people were up early to queue for wristbands that will allow them to file past the closed coffin, guarded by the king’s bodyguard in Scotland, the Royal Company of Archers.

“It’s the end of an era,” Stevens said. “But having listened to him (Charles) over the last few days, I think he’s well prepared for the task.”

Britain has been plunged into mourning by the death of its longest-serving monarch, who has been a fixture of the nation’s life and consciousness.

While the government said organisations need not cancel events, everything from strikes to football matches have been postponed in honour of the only monarch most British people have ever known.

Flowers, cards and candles have been left at royal residences across the country, where crowds have massed to pay tribute to the late queen and hail their new king.

Many were left by tourists and well-wishers from abroad.

“We’ve known her face all of our lives,” said Aurelie Mortet, a 46-year-old Frenchwoman at London’s Columbia Road flower market, which has seen a huge rise in demand.

The queen’s funeral is also expected to draw unprecedented numbers to London, as well as some 500 world leaders and heads of state, including US President Joe Biden.

Millions more are expected to watch it live on television.

Decades in the planning, the aftermath of the queen’s death has been full of pomp and ceremony.

Earlier Charles and his Queen Consort, Camilla, sat on gold thrones in London’s 900-year-old Westminster Hall to receive the formal condolences of the UK parliament.

“I cannot help but feel the weight of history which surrounds us,” the king replied to the assembled lords and MPs, vowing to follow the “example of selfless duty” set by his “darling late mother”.

The monarch is a largely ceremonial figurehead in Britain but retains constitutional powers, from officially appointing governments to approving legislation and meeting weekly with prime ministers.

“Parliament is the living and breathing instrument of our democracy,” Charles said.

As he takes on what he has called the “heavy responsibilities” of kingship, he will also make his first visits as monarch to Northern Ireland and Wales this week in a show of national unity.

While the emotional scenes in Scotland showed the deep affection for the queen there, her death has also reignited a debate over Scottish independence from the United Kingdom.

First Minister Nicola Sturgeon — who was to have her first audience with the new king on Monday — said it was “sad and poignant” to see the coffin leaving Balmoral.

But the pro-independence leader has been pushing nonetheless for a new referendum on the divisive issue.

“I’m not for independence. We’ve been together for hundreds of years. Why stop now?” said mourner Anne Johnston, 68, from Edinburgh.

She added, however: “No offence to Charles but I don’t think he’ll ever live up to the queen.”

Charles has seen his popularity recover since the death of his former wife Diana in a 1997 car crash. But he has been embroiled in several scandals in recent years.

He takes the throne at a moment of deep anxiety in Britain over the spiralling cost of living and international instability caused by the war in Ukraine.

With republican movements gaining ground from Australia to the Bahamas, the new king also faces a challenge keeping the Commonwealth realms in the royal fold.

Charles hosted his first reception on Sunday for representatives of the 14 former colonies over which he reigns in addition to Britain — at least for now.

In Barbados, which cut ties with the British Crown last year after nearly four centuries, there were mixed reactions at her death.

“It’s tragic in a sense because we have lost a page in history,” said retired Bridgetown resident Alfred McClean.

Meanwhile in Hong Kong, a British colony for more than 150 years until it was returned to China in 1997, crowds gathered in sweltering heat to pay their respects.

Emily Ng, 30, clutched a portrait she painted of the queen, describing how her grandmother used to tell her stories about the royals.

“I hence felt very connected to the royal family and even after the handover I would like to maintain that connection,” she told AFP.

Historic crown to be modified for Charles III coronation