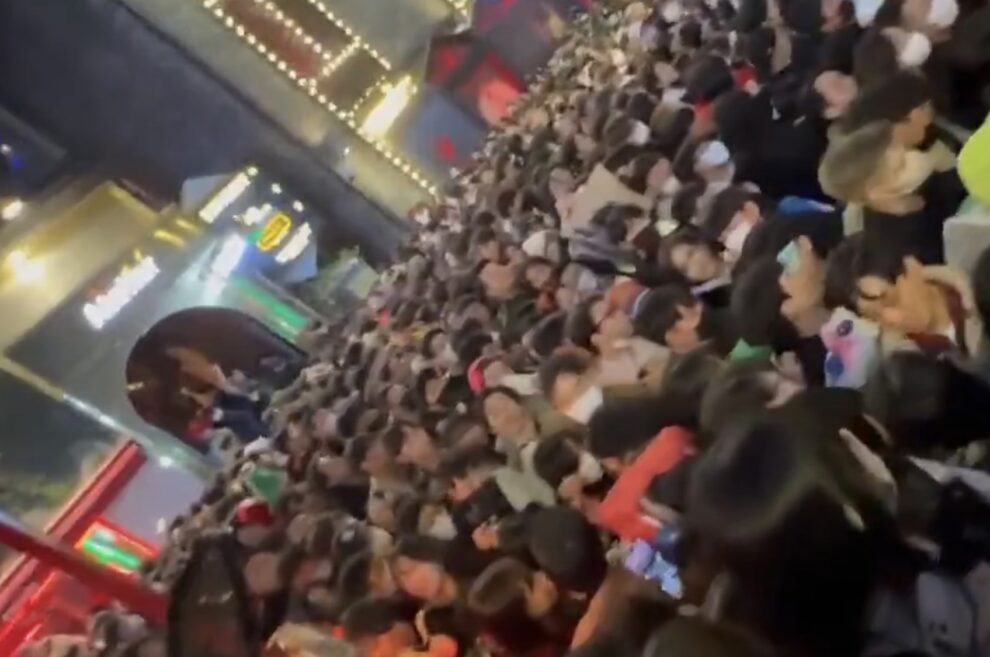 More than 150 people were killed and scores more were injured in a deadly stampede at a packed Halloween event in central Seoul late Saturday, officials said, in one of South Korea’s worst-ever accidents.

South Korea’s President Yoon Suk-yeol declared a period of national mourning Sunday, saying the government would pay for the medical care of those injured and the funerals of those who died.

The crowd surge and crush happened in the capital’s popular Itaewon district, where local reports said as many as 100,000 people — mostly in their teens and 20s — had gone to celebrate Halloween, clogging the area’s narrow alleyways and winding streets.

“In the centre of Seoul, a tragedy and disaster occurred that should not have happened,” Yoon said in a national address.

The government “will thoroughly investigate the cause of the incident and make fundamental improvements to ensure the same accident does not occur again in the future.”

“My heart is heavy and it is difficult to contain my sorrow,” he added.

Wearing green jackets that denote a national emergency, Yoon and other top officials visited the scene of the accident early Sunday and spoke to emergency workers, footage on local TV showed.

Earlier, eye-witnesses had described being trapped in a narrow, sloping alleyway, scrambling to get out of the suffocating crowd as people ended up piling on top of one another.

Paramedics, quickly overwhelmed by the number of victims, were asking passers-by to administer first aid, just on the edge of the chaos.

“There were so many people just being pushed around and I got caught in the crowd and I couldn’t get out at first too,” 30-year-old Jeon Ga-eul told AFP.

The fire department said at least 151 people, including 19 foreigners, were killed in the stampede, which occurred around 10:00 pm (1300 GMT).

The ministry of interior said that 150 more were injured.

“The high number of casualties was the result of many being trampled during the Halloween event,” fire official Choi Seong-beom told reporters at the scene, adding that the death toll could climb.

AFP photos from the scene showed scores of bodies spread on the pavement covered by bed sheets and emergency workers dressed in orange vests loading even more bodies on stretchers into ambulances.

“People were layered on top of others like a tomb. Some were gradually losing their consciousness while some looked dead by that point,” one eye-witness told the Yonhap News Agency.

In an interview with local broadcaster YTN, Lee Beom-suk, a doctor who administered first aid to the victims described scenes of tragedy and chaos.

“So many victims’ faces were pale. I could not catch their pulse or breath and many of them had a bloody nose. When I tried CPR, I also pumped blood out of their mouths.”

Twitter user @janelles_story shared a video that she said showed Itaewon shortly before the stampede began, in which hundreds of young people, many in elabourate Halloween costumes, are seen in a narrow street lined with bars and cafes.

The crowd appears in good spirits and calm at first, but then a commotion begins and people start being pushed and pressed into one another. Screams and gasps are heard and a female voice cries out in English “Shit, shit!” followed by “Oh my god, oh my god!”

The fire department’s Choi said the victims’ bodies were being transferred to a gym not far from the site of the stampede and to area hospitals to be identified.

Local television showed scores of ambulances streaming to the Soon Chun Hyang University Hospital, where some of the victims had been taken.

Meanwhile, Seoul Mayor Oh Se-hoon, who was on a visit to Europe, decided to return home in the wake of the accident, Yonhap reported, citing city officials.

Emergency first aid
At the scene, which had been cordoned off by the police and was bathed in the red from hundreds of flashing lights, music continued to play from some bars.

Dazed passers-by sat on the sidewalk, checking their phones. Others comforted themselves, hugging each other even as others — seemingly unaware of the scale of the tragedy that had unfolded just next to them, continued to celebrate.

Ju Young Possamai, a bartender in the Itaewon district, said he had been to several Halloween celebrations in Korea and was shocked by the tragedy.

“It was very sad to see something that we never, never expected,” Possamai, 24, told AFP. “It’s always crowded, but nothing like this has ever happened before.”

This year’s Halloween event was the first since the pandemic started in 2020 at which South Koreans have not been mandated to wear face masks outdoors.