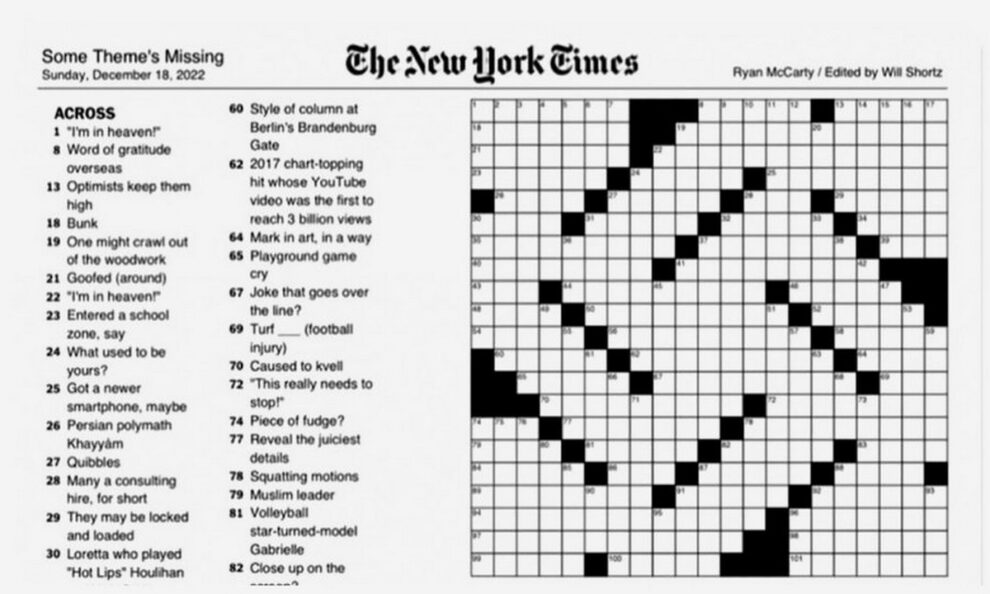 The New York Times received multiple complaints over the swastika-shaped crossword it published on Sunday.

‘This is a common crossword design: Many open grids in crosswords have a similar spiral pattern because of the rules around rotational symmetry and black squares,’ a Times spokesperson told Daily Mail on Monday.

Based on the puzzle’s silhouette and because it was published on the first night of Hanukkah, some influential Jewish leaders and politicians have expressed their outrage on social media.

Some argue the pattern, which is noticeable even at a glance, is a coincidence, while others assert it is one of the most recent and blatant examples of the paper’s alleged history of anti-Israel propaganda.

Following the country’s recent elections, Israeli politician Benjamin Netanyahu, who is set to become the country’s next prime minister, attacked the Times over an editorial that criticized his right-wing coalition.

‘After burying the Holocaust for years on its back pages and demonizing Israel for decades on its front pages, the New York Times now shamefully calls for undermining Israel’s elected incoming government,’ Netanyahu tweeted on Sunday.

Although Netanyahu stayed silent on the crossword puzzle scandal, other critics immediately linked the puzzle to the paper’s editorial views on Israel.

The mystery was revealed a day after an editorial in the Times cautioning against the new Israeli administration led by Netanyahu, the Israeli media network Israel Nation News stated.

The outlet then questioned its 38,000 followers about whether they believed the unsettling images were intended or not.

The Times cautioned that Netanyahu’s government, however, is a significant threat to the future of Israel. The ‘direction, security, and even the idea of a Jewish homeland’ was considered a warning in the article published on Saturday.

The Times also received criticism for omitting to mention the mass killings of Jews in Europe during Hitler’s invasion of the continent during the Holocaust.

Netanyahu was removed from office last year after serving four years. He has remained firmly opposed to Palestine in their border conflict over the Gaza Strip. After winning the election last month, he will take over as the leader of the nation’s most right-wing administration ever.

New York Times Names Next Editor To Lead US Paper