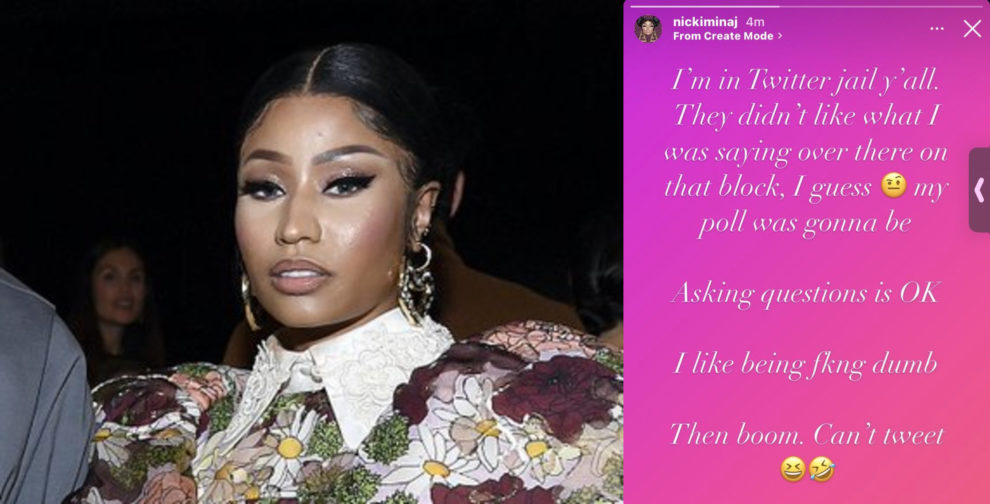 Nicki Minaj claimed she was suspended from Twitter on Wednesday night, shortly after making claims about Covid-19 vaccination side effects.

UPDATE: A spokesperson for the social media site said “Twitter did not take any enforcement action on the account referenced.”

Nicki Minaj wrote on her Instagram Story: “I’m in Twitter jail y’all. They didn’t like what I was saying over there on that block, I guess. My poll was gonna be. Asking questions is OK. I like being fkng dumb. Then boom. Can’t tweet.”

Later going live on her Instagram, Nicki said: “I’ll never go back on Twitter because it’s starting to feel a little scary.. what’s happening now is that slowly but surely we’re living n those places we used to talk about 20 or 30 years ago… we’ve become that place where you can’t speak for fear of the mob attacking you.. What am I doing that’s so bad that you’ve disabled my twitter? I didn’t put out any facts.”

She wrote on Twitter: “The White House has invited me, which I believe is a positive step. Yes, I’ll go. I’ll be dressed in all pink like in Legally Blonde to let them know I’m serious. I’ll ask questions on behalf of those who have been mocked for being human. Day 3 of #BallGate.”

Nicki Minaj said she will never use Twitter again after they put her in Twitter jail pic.twitter.com/Yl6Ot9alqa

This week, the rapper faced criticism for saying that a friend of her cousin in Trinidad and Tobago became “impotent” and “his testicles became swollen” after receiving the vaccine.

When asked about the statement of Nicki Minaj, Dr. Anthony Fauci, the nation’s foremost infectious diseases expert, said it was false.

“There’s no evidence that it happens, nor is there any mechanistic reason to imagine that it would happen,” Fauci said.