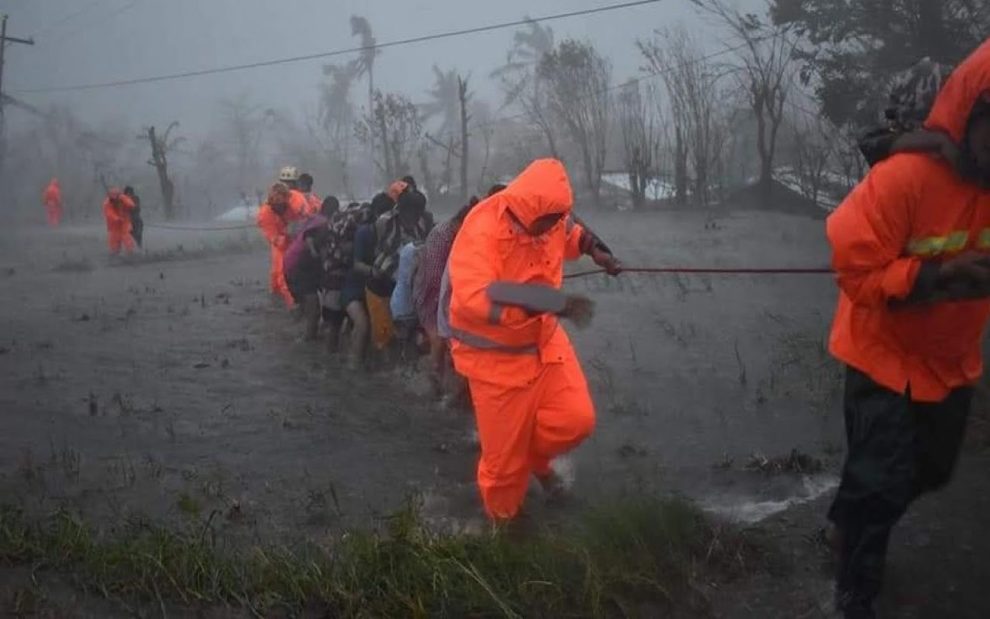 According to the Philippine Atmospheric, Geophysical, and Astronomical Services Administration (PAGASA), the first landfall located in the outskirts of Partnanungan, Quezon was recorded at 10:30 om. The second landfall made by the Typhoon was in Burdeos, Quezon and it occurred at approximately 11:20 pm. The third landfall which occurred just now took place in Quezon, near the General Nakar at 1:30 am.

Ulysses also a close approach to Calaguas Islands located in the Camarines Norte. Moreover, PAGASA expects a landfall over the regions of the Polillo Islands approximately between 11 p.m. on Wednesday and 2 a.m. on Thursday. PAGASA stated, The typhoon is forecast to slightly weaken while crossing Central Luzon due to frictional effects in the presence of the Sierra Madre and Zambales Mountain Ranges. However, it is likely to REMAIN A TYPHOON throughout its traverse.

Provincial Disaster Risk Reduction Management Council (PDRRMC) headed by Governor Danilo Suarez told the press that there were approximately 7,686 families evacuated from Quezon. This was done as a pre-emptive evacuation to protect people from various areas that are vulnerable to the adverse threat posed by Typhoon Ulysses. Families were evacuated from towns of Lopez, Tagkawayan, Calauag, San Andres, San Narciso, Gen. Luna, Burdeus, Macalelon, and Polillo Island.

Several people are circulating emergency numbers on social media to protect their friends and family. One user tweeted, This typhoon is something.. and getting stronger. please stay safe to all Filipinos out there. Please take note of these emergency hotlines and save it. A power outage is being experienced in other parts of Manila-based on the news. Please stay safe and be prepared People are cautioned to take all precautionary measures in regions of Quezon and Luzon Island.

BREAKING: Something exploded and caught fire in #Makati.

Strong winds in Makati, #Philippines right now, buildings are reportedly shaking because of the heavy wind. All happening due to Typhoon #UlyssesPH

A local news agency reports, power goes out in a building in Makati City after what seems to be an electrical explosion. A power outage is being experienced in different parts of Metro Manila during the onslaught of Electricity was out in several parts of metropolitan Manila, the region houses around 13 million people and spans over 16 cities.

Reports also indicate that at least one life was lost in the destruction caused by the cyclone, while several remain missing. Armand Andres, the Manila City Engineer has cautioned people to not drive small vehicles. He emphasized that small vehicles should refrain from taking Boulevard which is currently flooded due to possible storm surge. The Office of Civil Defence in the Bicol region reported the death of a 68-year-old man, who was found dead on the roof of his house located in Daet town, Camarines Norte province. This is 350km south-east of Manila.

The Philippines continues to suffer

Suhaimi Rafdi, the Mercy Relief Chairman expressed in a statement: “Our utmost priority is to provide emergency relief aid of food packs, clean water, hygiene kits, blankets and tarpaulin to the affected communities in Vietnam and Philippines. The situation is expected to worsen in the coming weeks and our response team will be working closely with our local partners and authorities to assess the situation.”

The most recent update aired by CNN Philipinnes states, 2 am update: Typhoon continues to intensify as heavy rainfall will be felt over Metro Manila, Rizal, Bulacan, Nueva Ecija, central and southern portions of Aurora, and the northern portion of Quezon including Polillo Islands within the next three hours.

US, Philippines to restart joint patrols in South China Sea