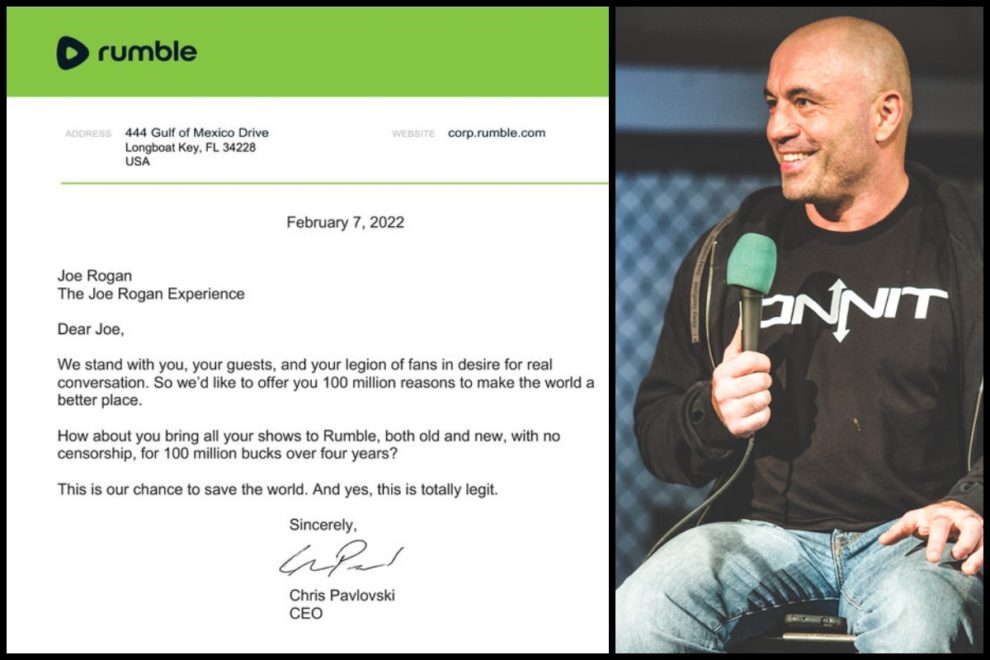 Rumble has offered podcast host Joe Rogan $100 million to bring all his shows to the platform with no censorship for the next four years.

Rumble tweeted its $100 million offer to Joe Rogan today. In the letter, CEO Chris Pavlovski said they stand with him, his guests and his “legion of fans in desire for real conversation.”

Spotify removes some of Rogan’s episodes

Spotify has been removing some episodes of the controversial podcast host’s episodes since a clip in which the n word was used resurfaced in a compilation. Rogan himself expressed shame at the video over the weekend, describing it as “horrible” in a post on Instagram. He added that it was the “most regretful and shameful thing” he has ever had to discuss publicly and that the compilation video consists of clips from the last 12 years that have been “taken out of context.”

Although Spotify reportedly doesn’t plan to remove The Joe Rogan Experience podcast from the platform entirely, CEO Daniel Ek apologized to the streaming firm’s employees for the way it has impacted them.

The apology came in a memo to employees that was shared with CNBC. Ek also said he does “not believe that silencing Joe is the answer.” Spotify plans to invest $100 million in the licensing, development and marketing of audio content and music from historically marginalized groups.

The streaming giant has also faced criticism for Rogan’s comments about COVID-19 as critics accuse it of broadcasting misinformation. Neil Young and Joni Mitchell have boycotted Spotify due to its continued hosting of his podcast.

Spotify boss says Joe Rogan is vital to the company