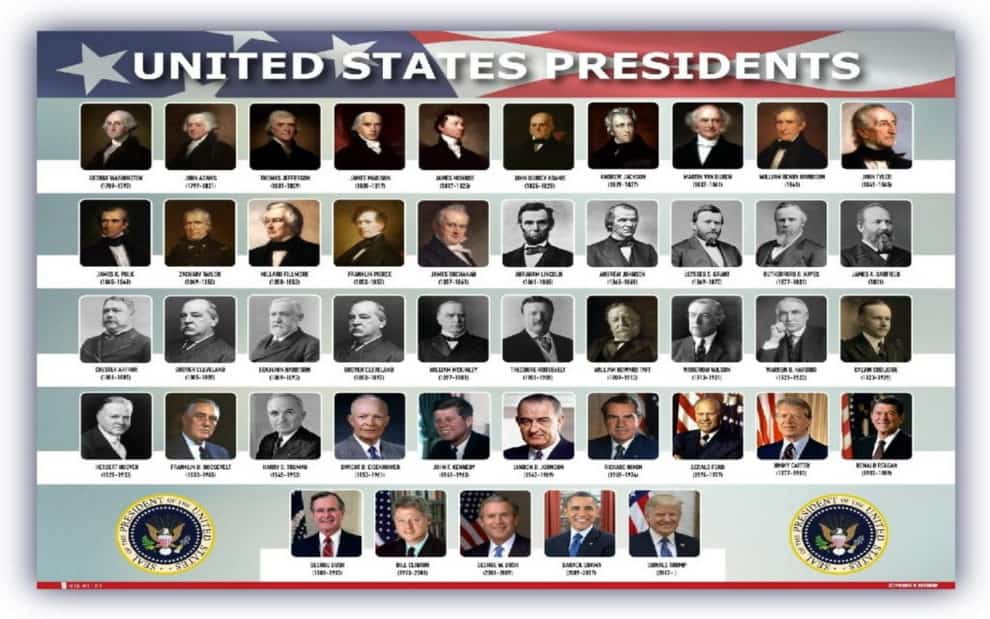 Leaders are people like you and me but possess the ability to rally people to move toward a specific and better vision. According to C-SPAN’s third presidential historian survey in 2017, a lot of qualities are put into consideration when rating past and present presidential leaders. These include public persuasion, economic management, moral authority, crisis leadership, vision, relations with Congress, international relations, performance, and many more. With George Washington being the first-ever president in the US, we now have a total number of 45 presidents in total, including Donald Trump. In this article, we’ll be looking at the list of the top 10 best American Presidents ever, according to their performance.

Ranked as 10th position on our list of top 10 Best American Presidents is James Monroe. And that’s because of his effective handling of the country’s international relations. As the fifth serving president, he was known for his frankness, integrity, and friendly personality. His administration had a lot of successes handling foreign affairs, including the settlement of boundary issues with Britain and the acquisition of Florida.

Ronald Reagan ranked as 9th position, is the 40th serving president in America. He’s ranked because of his high performance in public persuasion. He was an American actor turned president, and had a lot of amazing attributes, including an inspiring and charming personality. Ronald was also known for slashing income taxes, using two different federal laws, including the Tax Reform Act of 1986 and the Economic Recovery Act in 1981.

John F. Kennedy is the 30th president of the United States, serving between 1961 to 1963 before being assassinated. He’s ranked as 8th on our list of top 10 best American Presidents because of his public persuasion.

Harry is ranked as 7th, and he’s known for being passionate about pursuing equal rights for all citizens. He served as the vice president under the Franklin Roosevelt administration. However, he assumed office as the president after the death of Roosevelt and led the country through World War II.

Jefferson is the third president of the United States, and he’s ranked as 6th because of his vision and his relations with Congress. In 1803, he was able to purchase the territory of the Mississippi River to the Rocky Mountains from France, giving the country a chance to develop and expand better.

Eisenhower is the 34th president in the US, and he’s ranked 5th on our list of top 10 best American Presidents, because of his moral authority. He founded NASA and issued legislation creating the interstate highway system and airplane technology. Also, he contributed immensely to the financial growth of the country in the 1950s.

President Roosevelt earned the 4th position on our list of top 10 best American presidents because of his public persuasion. He assumed office shortly after the assassination of President McKinley and became the first president to win the Nobel Peace Prize. Apart from that, he was known for his implementation of excellent national and foreign policy.

Franklin was the longest-serving and the 32nd president of the United States. He was elected during the time of great economic depression in 1933 and led the country to world war II before dying in 1945. He’s ranked 3rd on our list of top 10 best American presidents because of his public persuasion and handling of international relations.

George Washington, known as the father of the nation, is the first president of the United States. He was a military general and became the president of the country in 1789. He created many of the traditions that are still in use in the US until today. Washington is the second on our list of top 10 best American presidents because of his moral authority, economic management, and his high performance.

Abraham Lincoln is the best American President because of his vision, crisis leadership, and administrative skills. He’s also known for being passionate about pursuing equal rights for all. He led the union through the four years of civil war and eradicated slavery. Also, Lincoln was an honest man and a genius in adapting with every individual that came his way.