According to Platformer’s Managing editor, existing Blue subscribers will continue to have access to Blue features. However, for new subscribers, Twitter has made Blue subscription unavailable for purchase on Apple’s iOS. – READ MORE.

Twitter is clearly popular these days, owing to recent developments such as layoffs, excessive advertising, and Twitter Blue verification, which came with Elon Musk’s takeover. Recently, appears that some users are now reporting about the Twitter Blue ‘not available in your country’ issue.

Reports of Twitter Blue ‘not available in your country’

In terms of the company’s membership plan, customers will now see fewer advertisements and receive precedence in answers and mentions.

However, it is not as simple as it appears because its $7.99/month price system has perplexed many, while some can subscribe to the service for $4.99/month.

“Hey @elonmusk why am I not seeing a blue check on people who signed up for Twitter Blue? Also, why does it say Twitter Blue is not yet available in my country? I’m in the US?,” a user posted.

“@TwitterBlue I’m in Canada but it says Twitter Blue isn’t available in my country when I click on the subscription button. Why? I need that edit button!!” another affected user complained.

Apparently, users who would like to subscribe to the feature are not seeing the option. Instead, they see a ‘Thanks for your interest! Twitter Blue will be available in your country in the future’ popup.

Twitter Blue appears to be still not working in several countries, including the United States, Canada, Australia, the United Kingdom, and even New Zealand. 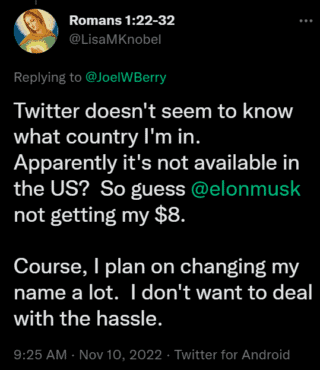 This is highly concerning, considering Twitter administrators have confirmed that the blue checkmarks will be available in the aforementioned countries.

Possible reason of the issue

It is also worthwhile to mention that Elon Musk just revealed that Twitter Blue will be available in India soon. 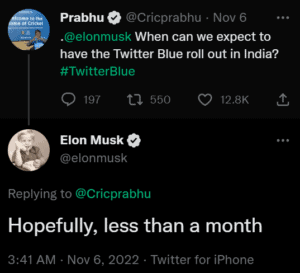 For the time being, it appears that there are two possible explanations for why Twitter Blue is inaccessible for some users. To begin, the feature is generally limited to iOS, and people on other platforms will need to wait for it to become available.

Another possible explanation is that certain features are brought out in stages, which explains the feature’s unavailability. It’s uncertain when Twitter Blue would be available with surety, but it appears as if it will happen shortly.