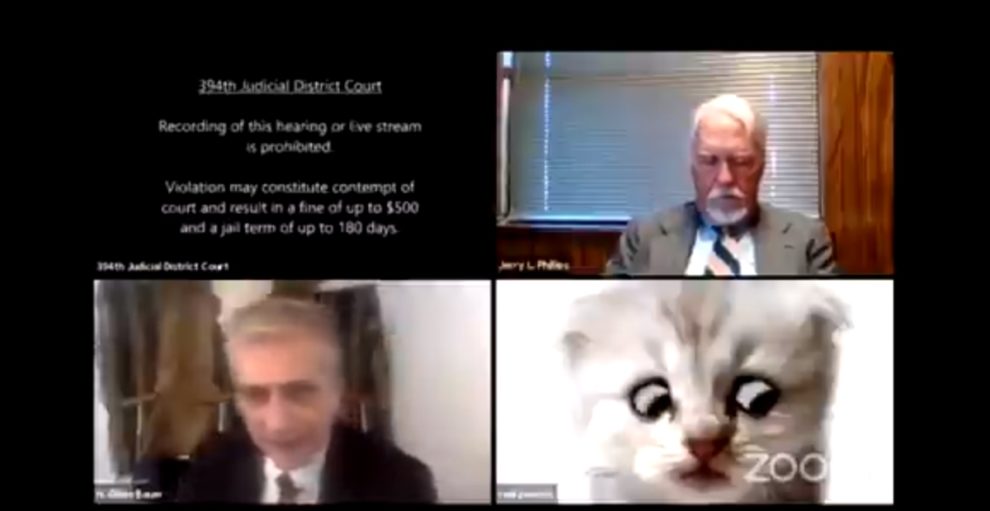 A lawyer on a zoom call enabled a cat filter and had to say to the judge “I’m here live, I’m not a cat,” according to a viral video.

A court case in Texas was delayed due to a cat filter. Lawyer Rod Ponton showed up to virtual court in the 394th district of Texas with a cat filter enabled.

The best thing about this video is the obvious warning that you might be jailed if you record the Zoom session, and whoever recorded this went “Screw it, man. People need to see this.”

“I mean the court itself posted the clip on youtube and the judge tweeted about it, so…,” the Reuters reporter covering the US Supreme court tweeted.

Excerpts from the video clip:

“Can you hear me judge?” The lawyer asked.

“It is and I don’t know how to remove it. I have got my assistant here and she’s trying to remove it but, I am prepared to go forward with it. I’m here live. I’m not a cat.”

“IMPORTANT ZOOM TIP: If a child used your computer, before you join a virtual hearing check the Zoom Video Options to be sure filters are off. This kitten just made a formal announcement on a case in the 394th (sound on).”

“These fun moments are a by-product of the legal profession’s dedication to ensuring that the justice system continues to function in these tough times. Everyone involved handled it with dignity, and the filtered lawyer showed incredible grace. True professionalism all around!”

“Serious question where do i get that lawyer’s cat filter that’s going around twitter? asking for a friend. also maybe having a bad hair day,” Shalene Gupta asked on Twitter.

Nick Fish tweeted, “Can we have President Trump’s lawyers use that cat Zoom filter when presenting their argument? Couldn’t hurt!”

“This is hilarious for so many reasons, but I’m probably most entertained by just how effectively this particular kitten filter is communicating this poor lawyer’s dismay and helplessness around his predicament. “I’m here live, I’m not a cat!” LOL,” wrote Kevin Bankston.