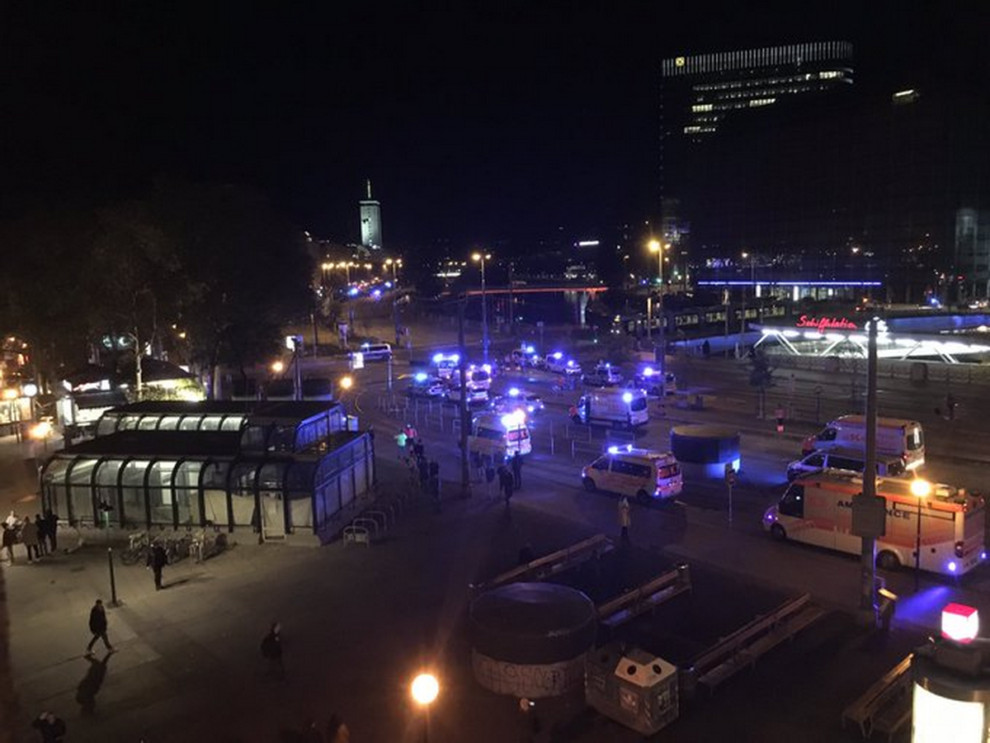 Reports of a shooting incident in the center of Vienna city of Austria, near the main Jewish community center in the vicinity of Schwedenplatz in Vienna’s first district. Police special units have secured the nearby synagogue and are in contact with the Jewish community’s own security. More updates are being added at the bottom of this article.

According to police, “there is a larger police operation going on in the 1st district of Vienna (Inner City area). Officers are on-site and check the Situation. We keep you posted on the matter.”

According to the latest updates, one terrorist is said to have blown himself up with a belt of explosives. Several other perpetrators are said to be on the run.

According to Austrian media, One police officer is dead and a guard at the synagogue is reportedly injured after being attacked by the terrorists.

Vienna’s mayor said 15 people had been injured, seven of them having a serious condition. Among the injured is a police officer, according to reports.

Video – Shooting and attack at synagogue in Vienna

#BREAKING: Footage of one of the Vienna attackers in Austria pic.twitter.com/HuZJa3SN7H

UPDATE: New reports from Vienna coming in. Another shooting has just been reported at the Hilton hotel in Vienna. In addition, hostages have reportedly been taken by the terrorists at a third location.

UPDATE 2: All public transportation halted in Vienna. At least 3 still active situations in the city center. Police ask citizens to avoid the area at all costs.

UPDATE 3: Hostages are reportedly being held at Akakiko restaurant in Vienna following the shooting.

UPDATE 5: U.S. State department issues security alert for Vienna in a tweet, “There is an ACTIVE SHOOTER incident the 1st district near Schwedenplatz/Sterngasse. Police are present and engaging. Stay inside until further notice. Avoid the area, follow instructions from authorities and monitor media for updates. ”

IMP Update: Some tweet handles are spreading false video from Spain, as #Vienna's incident. This video of police chasing a man is from Spain and not #Vienna, Austria. pic.twitter.com/wvgYUXJdAP

UPDATE 7: Security forces take over crucial public transport locations as terrorists are believed to have moved to the outer districts from the inner districts in Vienna.

UPDATE 8: At least one person is confirmed to have been killed in Vienna and several more are believed to be dead after a shooting in central Vienna, according to the city’s police.

Update 9: French President Emmanuel Macron tweeted that Europe must not “give up”. “We the French people share the shock and grief of the Austrian people, struck this evening by an attack in the heart of their capital, Vienna. After France, a friend of ours is attacked. This is our Europe. Our enemies must know who they are dealing with,” the French President said.

UPDATE 10: Chancellor of Austria confirms that the federal government has decided to deploy armed forces to Vienna immediately. Armed forces will take over the role previously carried out by police. Also, according to the Austrian Interior Ministry, they have no confirmation yet if one of the attackers blew himself up or not as previously reported by the local media.

UPDATE 11: Vienna police still urging everyone to stay at home, seek refuge if out, avoid public places, and don’t use public transport. Austrian Ministry of Interior says the operation to apprehend all terrorists is still ongoing.

UPDATE 12: Many people are still sheltering in restaurants following the still ongoing terror attack in Vienna, according to a witness account on Austrian TV.

UPDATE 14: Danish police have increased their security presence around the synagogues in Copenhagen following the attacks in Vienna. Multiple streets in the vicinity of the synagogues have been closed, local police confirm.

UPDATE 15: Austria’s Chancellor Kurz statement on the terrorist incident in Vienna, “Our police will take decisive action against the perpetrators of this heinous terrorist attack. I am very glad that our police officers have already been able to eliminate one terrorist.”

UPDATE 16: More than 1,000 people are stuck inside the Vienna Opera house, according to the latest reports.

UPDATE 17: Seven people are reportedly dead and several injured in the Austrian terrorist attack. ORF TV has issued a map of the 6 locations attacked this evening in Vienna. See Map below: 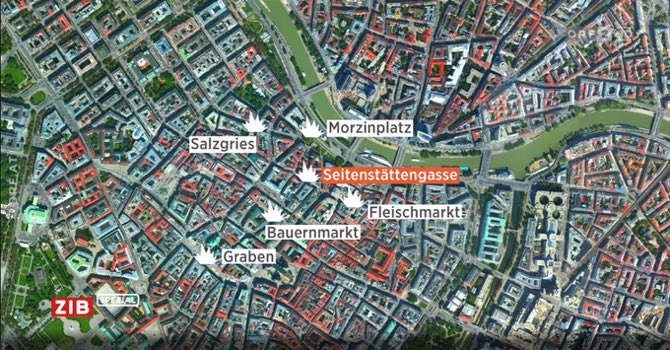 UPDATE 8:12 pm EST: According to the Austrian Interior Minister, at least one attacker is still on the run. Special forces are conducting search operations to find him. “Due to the current situation, there will be no compulsory schooling in Vienna tomorrow. Children can therefore stay at home, excused. For all those for whom this is not possible, the schools are of course open. Stay safe and above all healthy”, the government said in a tweet.

UPDATE 18: 34 pm EST: Austrian interior ministry says one attacker was killed and the border checks are being reinforced. “We have brought several special forces units together that are now searching for the presumed terrorists. I am therefore not limiting it to an area of Vienna because these are mobile perpetrators,” Nehammer told broadcaster ORF, urging the public to stay indoors until the all-clear is given.