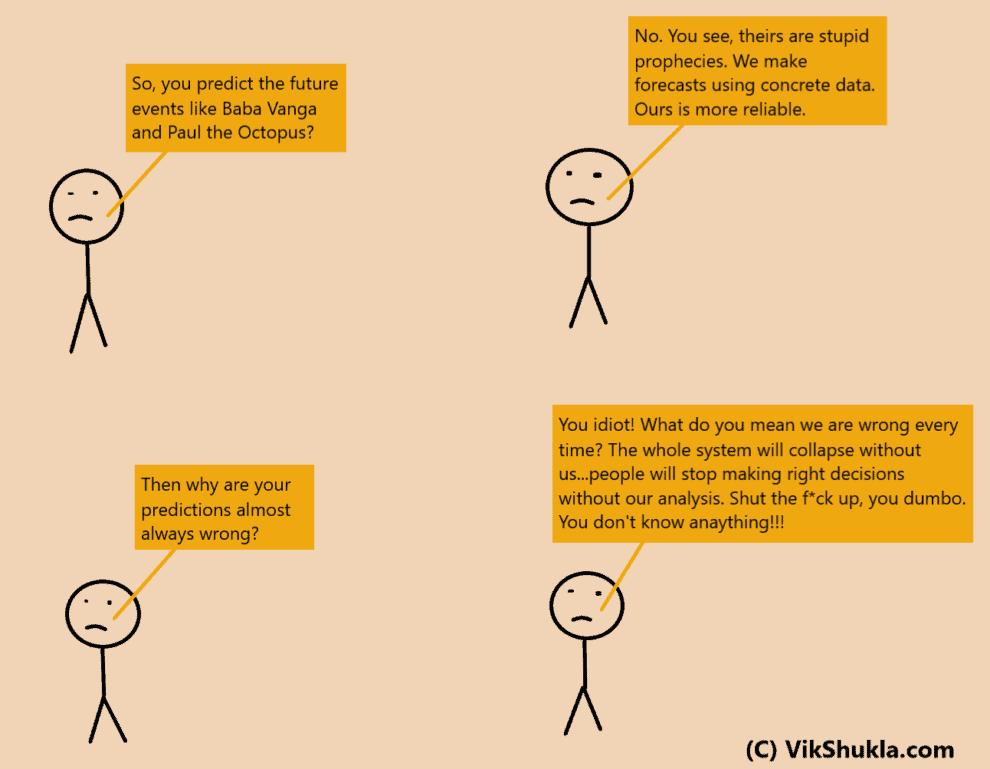 We are living through one of the darkest times in modern history. Every analyst and economist is predicting the short-term and long-term future to give us a sense of clarity. But the analysts are almost always wrong in their predictions.

The harsh reality is we don’t know how bad things will get or when the economy will start recovering. We can’t predict the future. If we could, none of us would ever die or get in trouble. We would conveniently avoid places and activities where the God of Death is patiently waiting for us.

For some reason, the highly educated economists and analysts believe they can predict the future. They have access to massive amounts of data, machine learning, artificial intelligence, blockchain, and God’s Brain.

Since they use data and a specific methodology, they like to call it forecast instead of prediction. It gives them more credibility over Baba Vanga and Paul the Octopus.

They can use complex algorithms, calculations, and assumptions to tell the rest of the world what’s going to happen to the global economy the next quarter, next year, next decade, and next century.

Let’s look at the current scenario. When Indian Prime Minister Modi announced a nationwide lockdown in March, Barclays, Moody’s, Icra, Nomura, IMF, and a dozen other firms have changed their GDP growth projections. Analysts at all these firms have changed their predictions, again and again, the moment they realized their previous prediction was wrong!

They keep changing their forecasts every few days as fresh data becomes available. They are fully aware that the forecast they are currently preparing will become useless in a few days. But they got no other choice. They have to tell their clients something.

There is an overwhelming number of research firms, brokerage firms, rating agencies, and other institutions issuing their own forecasts. And all of them come up with different numbers.

Who should we trust? We don’t know who is more reliable or who is going to be more reliable this time. The smartypants at media houses answered that question by inventing the ‘consensus’ of all projections. As if the consensus is a true picture of the future in its truest form! I call bullsh*t!

Do you know what’s even funnier? Back in 2017, PricewaterhouseCoopers issued global economic growth projections for the year 2050! No kidding. They projected the economic growth of 32 of the world’s largest economies from 2017 through 2050.

When the Coronavirus pandemic brought the global economy to its knees, PwC said their 2017 report didn’t foresee the pandemic. So, PwC in 2017 was like:

Hey you, read my economic projections for 2050. I’m going to tell you about the future. See, it’s so damn exciting!

They will say “Sorry, our previous prediction was dumb” a dozen more times between now and 2050.

A game of luck and confidence

If you make a hundred predictions, maybe you’ll get a few right. That’s more because of sheer luck than skill.

But an accurate prediction gives analysts more confidence. It encourages them to make bigger, bolder predictions more openly. As if now they can see the future more clearly.

A myriad of things in the world – most of them beyond our control – have to align perfectly for our prediction to turn out accurate.

It doesn’t matter whether you are using historical, quantitative or some other model. Your models influence only your prediction – they have little power to influence the wider world.

Even though we can’t make accurate predictions, our brains are wired to make educated guesses and see the probability of events. Anticipating the future events gives us a sense of purpose.

But when analysts are trying to predict the future based on the actions, behaviors, needs, and incentives of others, they are highly likely to be wrong.

Most analysts and economists are rich kids who went to convent schools and then to IIM, Harvard, Oxford, or Stanford. Every day, they walk out of their shiny BMW, head into the air-conditioned office, and try to predict what the future of 1.3 billion poor Indians would be.

They predict the future of people who have lived in poverty and whose monthly income is even lower than what the analyst/economist spends on a bottle of wine. Such analysts’ predictions are destined to be wrong.

So, why do they still make predictions?

For two reasons – 1) Their livelihood and reputation depends on it. They have to predict something. 2) We want it. Plain and simple.

The analysts are not just concerned about providing the most accurate and most reliable data. They are also concerned about their own career growth, ambitions, reputation, and incentives.

Every single analyst on the planet knows that there is a high probability of their prediction turning out to be wrong. But they proclaim they just came back from the future…and here’s what the future looked like. You should believe me. All the data in my report also points to the same conclusion.

Why do they do that? Because publicly accepting that they can’t predict the future will be an insult to their perceived intelligence, position, fat paycheck, and the company they work for.

An analyst/economist spends years of time and millions of rupees to learn how to create meaningless but shiny reports filled with jargon. It’s difficult for them to accept that all the money and time they spent learning how to play with Microsoft Excel was a waste.

So they keep creating reports and predictions to earn a handsome salary and polish their ego. I read somewhere that Effort put into a prediction may increase confidence more than accuracy. Damn true!

Why do we crave predictions?

Our craving for predictions and forecasts skyrockets in uncertain times. Just look at this Google search screenshot.

When an unexpected event shakes us to the core, we seek the opinions and predictions of experts…believing that experts know more about things than we do.

Our hopes and behavioral biases make us seek forecasts. Hope, because knowing the future events will help us take advantage of the situation to better our lives.

And biases because when we are going through tough times, we want the future events to happen exactly the way we want them to happen.

I wouldn’t say it’s a bad thing. Because our hopes and biases are necessary for us to make it through the day.

Most predictions fail because the world is extremely complex for an analyst armed with an Excel sheet to predict the future with accuracy. There are thousands of variables at play. Sometimes the variables that nobody pays attention to turn out to have an outsized impact on our future.

For now, our focus should be on putting food on the table and keeping our families safe.