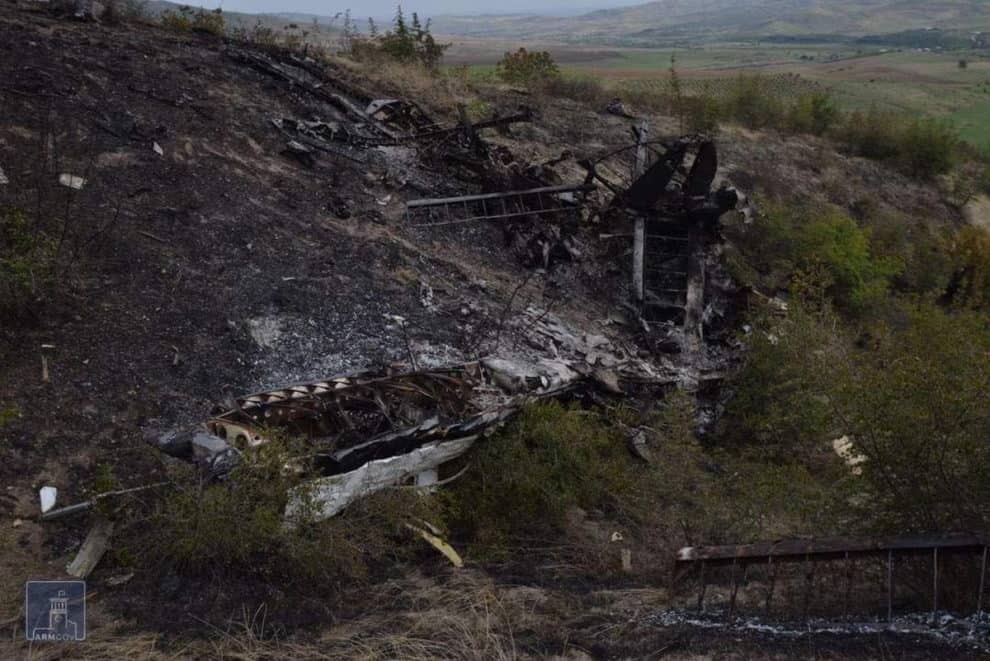 UPDATE: Chief of the Press Service of the Ministry of Defense of Azerbaijan, Col. Vagif Dargahli, stated: “The information spread by the Armenian side about the shooting down of the aircraft of the Air Force of Azerbaijan in the evening is a false and misinformation.”

“I declare that all the aviation assets of the Azerbaijan Army are in service and operable.”

The latest news regarding the Armenia vs Azerbaijan clash states that Artsakh Defense Army forces in Nagorno Karabakh shot down an Azerbaijan’s Air Force plane. The news has been confirmed by NKR Press Secretary, Vahram Poghosyn. The plane was reportedly shot down over Martuni. Martuni has been heavily shelled by Azerbaijani artillery today.

News reports indicate that the plane was shot down by Artsakh Defense Army units. Pictures and footage surfacing from the Martuni region show wreckage, Russian journalists have been unable to identify anything yet. Some reports suggest that the Azerbaijan Air Force plane was actually a Mi-8.  No other details have been confirmed yet.

Recent reports about the incident confirm that the Azerbaijan Air Force plane that was shot down was not a Mi-8 but an An-2. This information was revealed by the spokesman for the Armenian Defense Ministry.

The tensions between the two states further escalate after the Azerbaijan Air Force plane shot down. Azerbaijan has announced the number of casualties incurred by the Armenian army for today. Officials from Azerbaijan reveal that 550 Armenian soldiers have been killed and wounded today, while 22 tanks and armored vehicles were destroyed by the Azerbaijan army. Moreover, 15 air defense systems of the Armenian army were also destroyed. In addition to this, 18 drones were shot down, 8 military batteries were destroyed and 3 ammunition depots were blown up.

Dozens of deaths have been reported in battles between forces fighting for Armenia and Azerbaijan. The conflict stems from a dispute over control of the mountainous region of Nagorno-Karabakh. It is recognized as part of Azerbaijan but has been controlled by ethnic Armenians since a war ended in 1994. Tens of thousands of people died during the war and a million others were forced to leave their homes.

UN Secretary-General Antonio Guterres stated that he is “extremely concerned over the fresh resumption of hostilities” between Armenia and Azerbaijan. “The Secretary-General strongly calls on the sides to immediately stop fighting, de-escalate tensions and return to meaningful negotiations without delay,” Guterres’s spokesman said in a statement.

Guterres “condemns the use of force and regrets the loss of life and the toll on the civilian population,” the statement said, adding that the secretary-general would speak to the President of Azerbaijan and the Prime minister of Armenia. The conflict between Armenia and Azerbaijan will adversely affect international politics.

Azerbaijan’s Foreign Ministry maintains the stance that the conflict arose entirely as a result of hostility displayed by Armenia. “Another [act of] aggression by Armenia against Azerbaijan is a blatant violation of fundamental norms and principles of international law, international humanitarian law, including the Geneva Conventions of 1949 and their Additional Protocols, as well as United Nations Security Council Resolutions 822, 853, 874, 884 of 1993, demanding the immediate and unconditional withdrawal of the armed forces of Armenia from the occupied territories of Azerbaijan,” the ministry said in a statement.